Comments from United States Federal Reserve have fuelled the New Zealand sharemarket and the dollar. 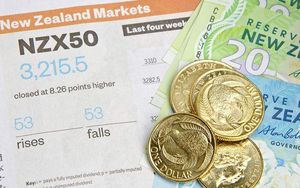 Minutes from the Fed's latest meeting showed the central bank will take its time to taper off its economic stimulus.

That prospect caused the New Zealand dollar to gain a cent against a weakening greenback, hitting a high of 87.46 US cents.

Westpac currency strategist Imre Speizer says if the US currency remains weak, it's possible the Kiwi could top its all-time post-float high of 88.43 US cents.

Meanwhile, the sharemarket was also flying high on the Fed's comment, with the NZX50 index climbing 48 points, or nearly 1 percent, to 5115.

He says a few bargain hunters have come into the market and Xero did well on Thursday.

Meanwhile, Trilogy shares, which have halved in value over the last year, gained more than 15 percent to 53 cents after the Ecoya owner upgraded its full year profit forecast.

And shares in Abano Healthcare are up 3 cents to $6.45 after a group of shareholders launched a bid to oust its chairman Trevor James.