Reserve Bank Governor Graeme Wheeler has confirmed he expects to raise the benchmark interest rate to about 4.5 percent in the next two years to curb inflation. 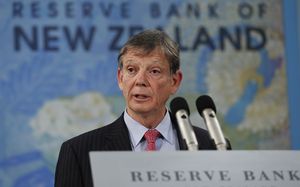 Mr Wheeler said on Friday the New Zealand economy was growing too fast to keep inflation in check, which was why interest rates needed to rise soon.

The economy grew about 2.7 percent a year during the past two years, compared with its non-inflationary capacity of a little over 2 percent.

On Thursday when he left the Official Cash Rate (OCR) unchanged at its record low of 2.5 percent, Mr Wheeler said the economy is now growing at about a 3.5 percent annual pace.

Mr Wheeler said a fall in house prices was unlikely but could happen if households became less able to pay their mortgages.

Rising house prices have been one of Mr Wheeler's greatest concerns. He said the situation was made worse by household debt levels at about 150 percent of household disposable incomes, and those debt levels were rising further.

Financial markets are convinced the Reserve Bank will start raising interest rates in March as the economy and inflation build up a head of steam.

The OCR has been unchanged since March 2011 while the economy clawed its way back from its prolonged but mild recession, and most economists regard a more normal level as something above 4 percent.

Westpac chief economist Dominick Stephens said Mr Wheeler's comments suggested he would take a sure and steady approach to normalising the OCR.

"I think the Reserve Bank will increase the OCR 25 basis points in March and will give further colour about the shape and extent of the OCR hiking cycle that they see in the future and I think that'll be suggestive of a total of five hikes this year."

Mr Stephens said until Thursday, financial markets were fearful that the Reserve Bank might consider lifting the OCR more aggressively and sooner than that, perhaps by 50 basis points in March.

However, he said the Reserve Bank has displayed steadiness in its approach and he does not believe a hike of that size that would be likely.

Most economists expect a 25 basis point increase in the OCR to 2.75 percent on 13 March.