Smartphone maker Blackberry has agreed a five-year deal with Foxconn, the big Taiwan-based maker of electronic products and components.

The two companies will initially work on the development of a new smartphone.

Blackberry also announced on Friday a third-quarter loss of $US4.4 billion, including a big write-down of assets. 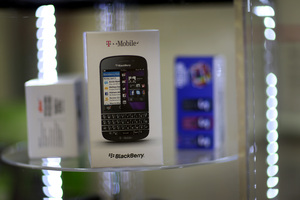 The firm once dominated the smartphone market, but has seen its fortunes fall in recent years and last month abandoned an attempt to find a buyer.

The struggling company has been hit by the success and popularity of smartphones launched by rivals such as Apple and Samsung and its attempts to boost its market share have not yielded the desired results.

Foxconn is the world's largest manufacturer of electronic products and components, and already has extensive links with Apple as the maker of the iPad and iPhone.

Meanwhile, Blackberry's quarterly results continue to underline the company's struggle to regain financial stability. Excluding the one-time items and writedowns, the loss was $US354 million.

Revenue fell to $US1.19 billion from $US2.73 billion as increased uncertainty about the company's fate led to further sales erosion.

A new line of devices that run on BlackBerry 10 software has failed to win back market share.