Our Future Leaders? Young, ethnic and hungry for change

Michael Joseph Savage was a humble man with modest taste, according to Shaun McGuire, Head Archivist at Archives New Zealand. He’s surrounded by a group of young ethnic leaders as he holds up a rather battered old leather briefcase belonging to the first Labour Prime Minister of New Zealand (1935-40). 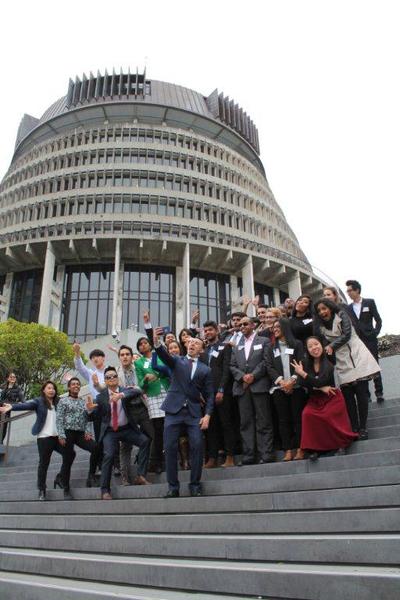 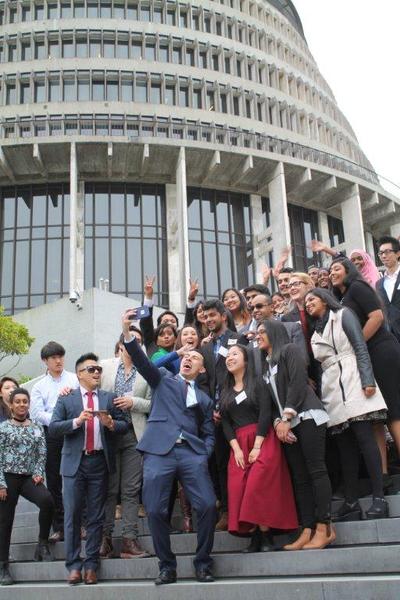 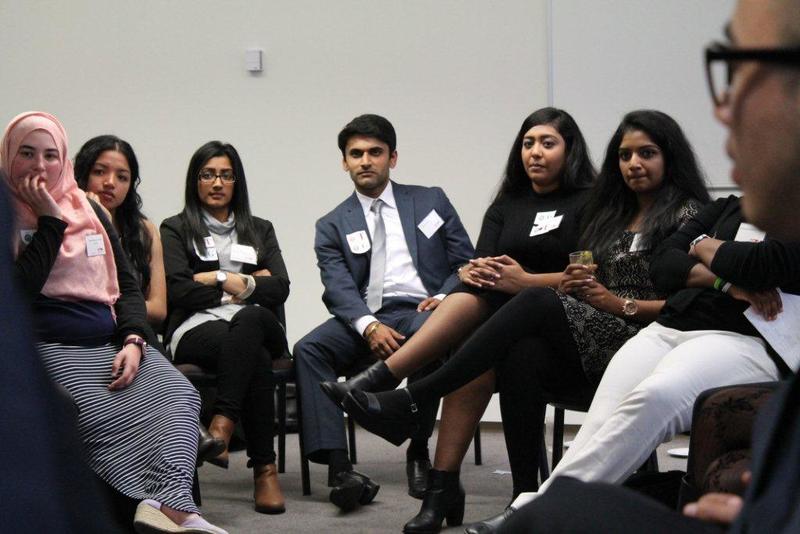 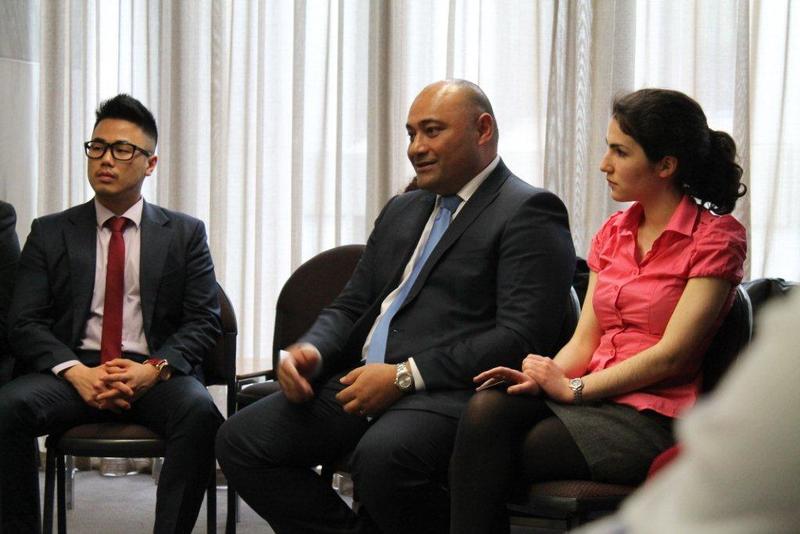 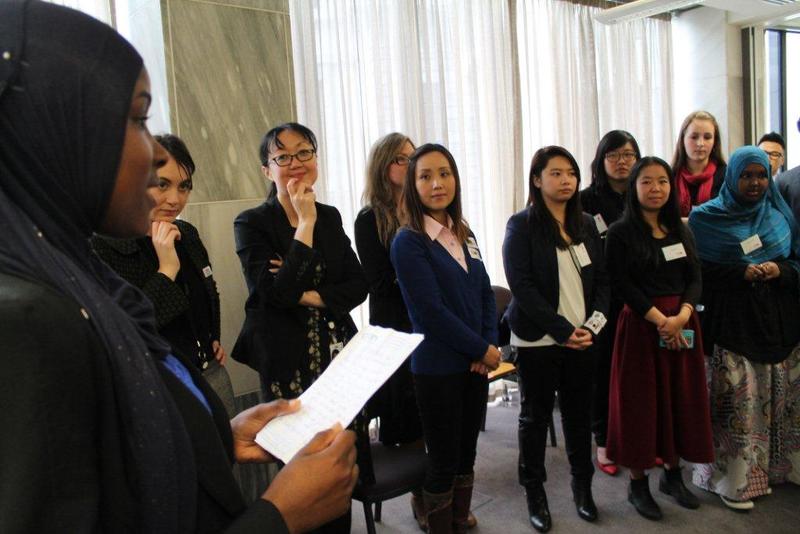 Fatumata Bah reads their thanks. 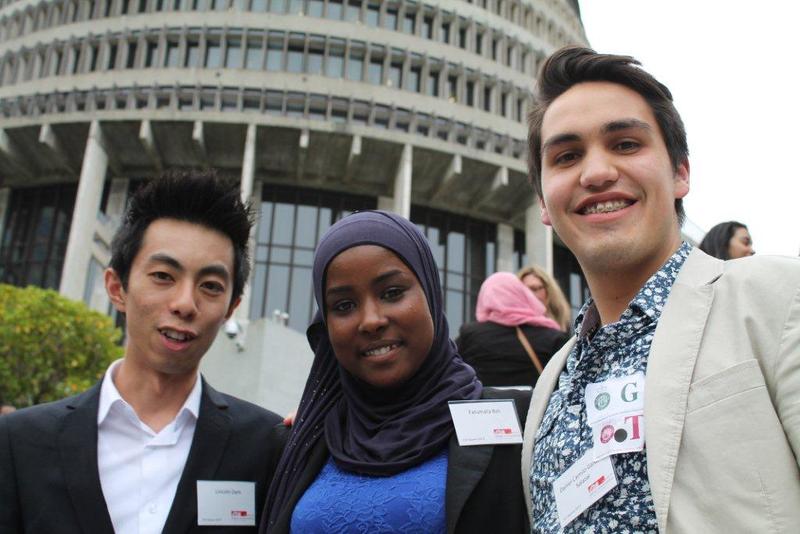 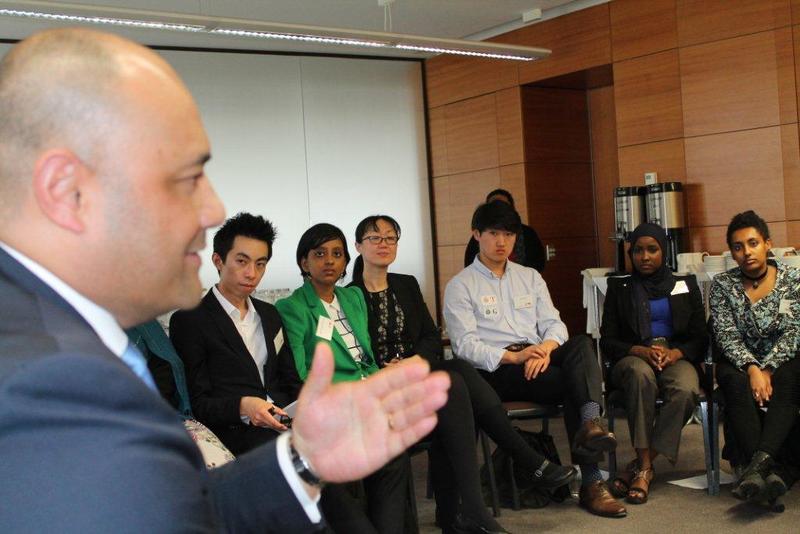 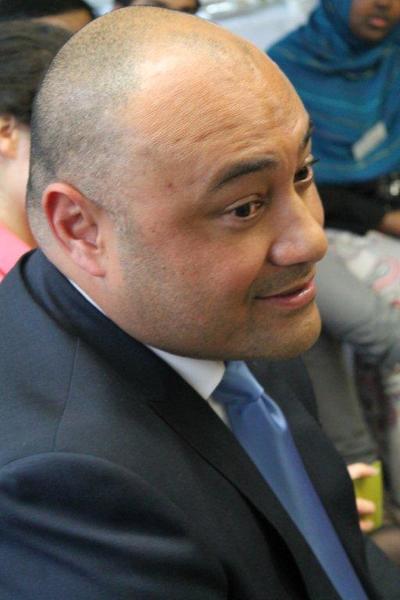 Minister tells group growing up in NZ facing discrimination too 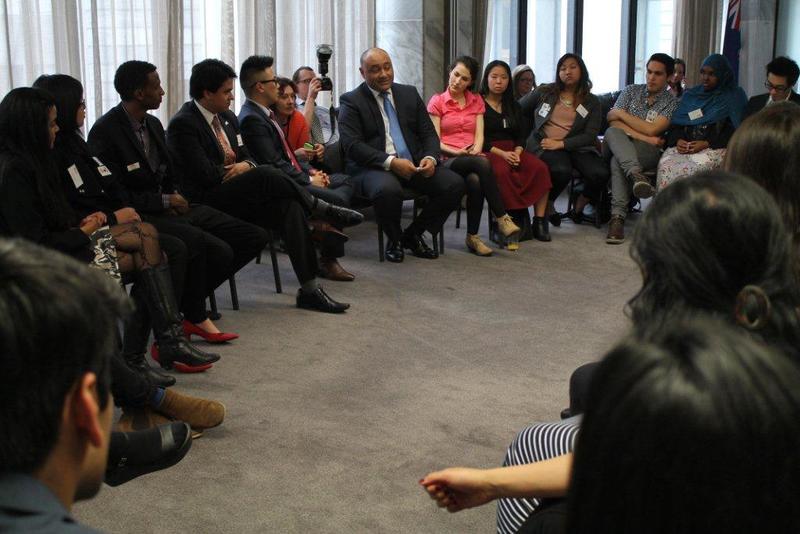 Meeting at Parliament and Minister of Ethnic Communities 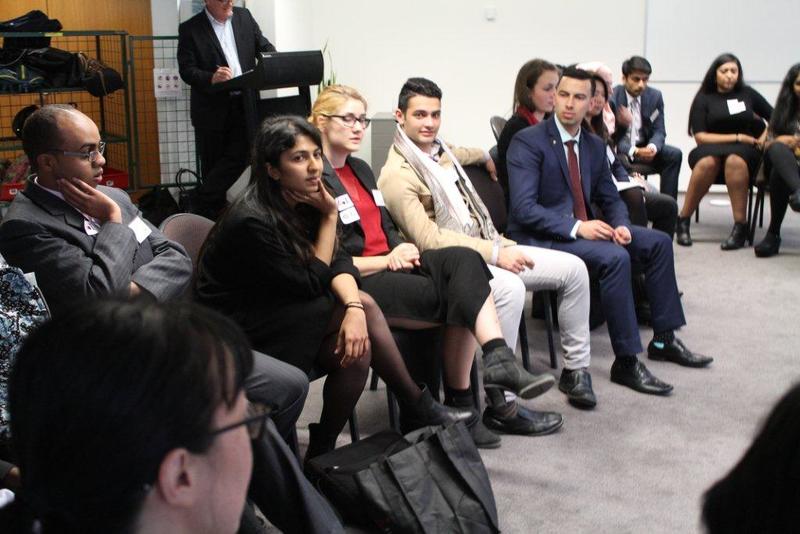 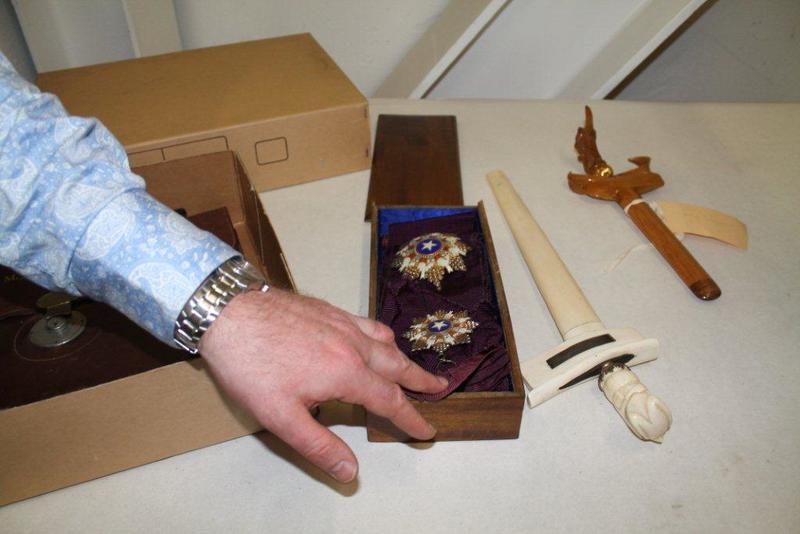 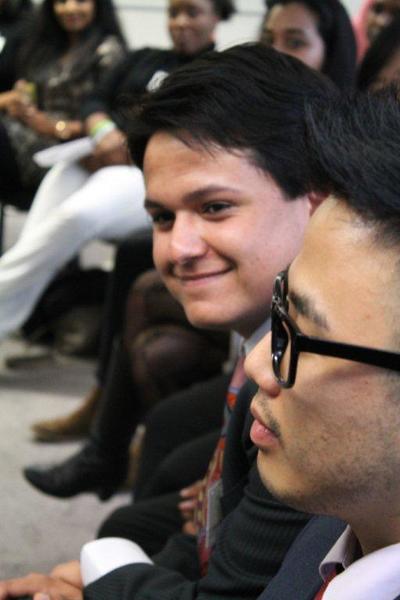 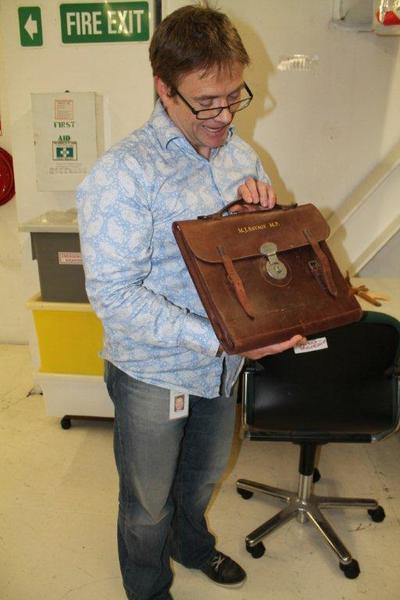 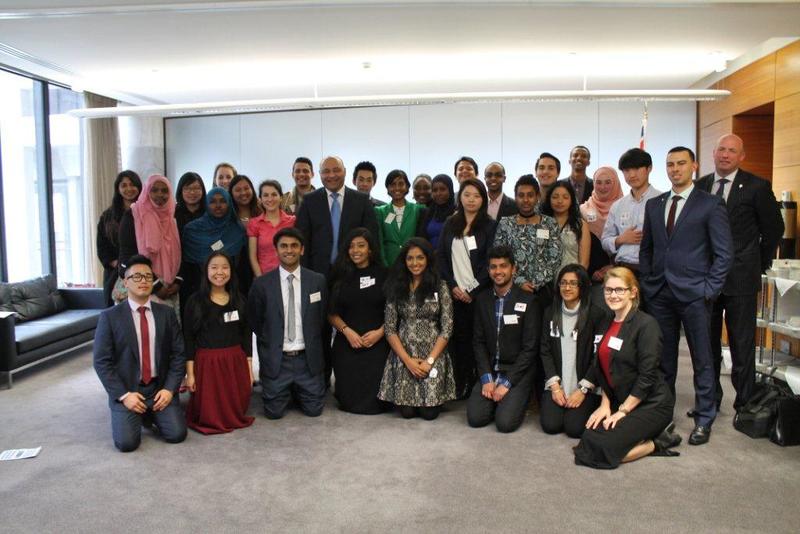 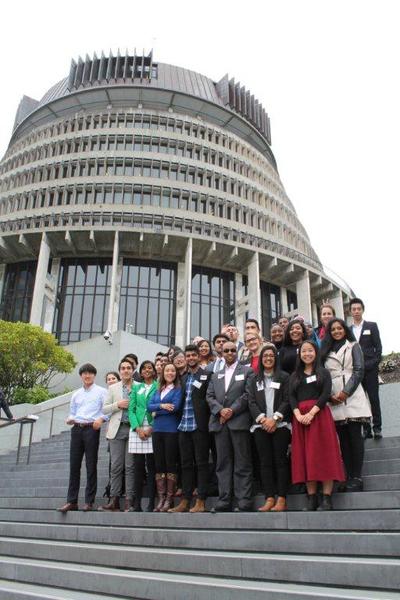 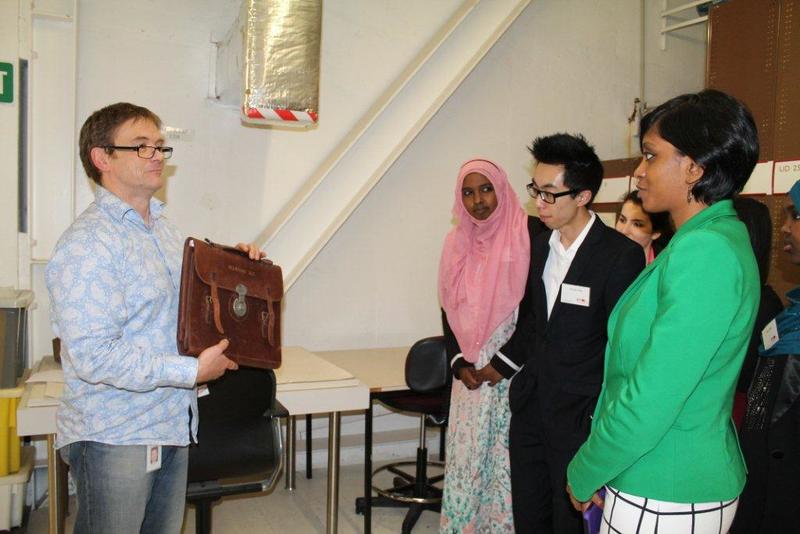 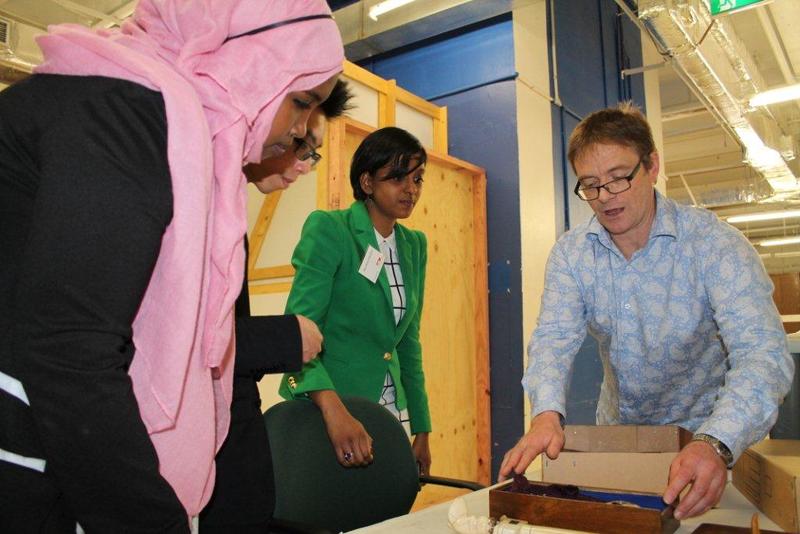 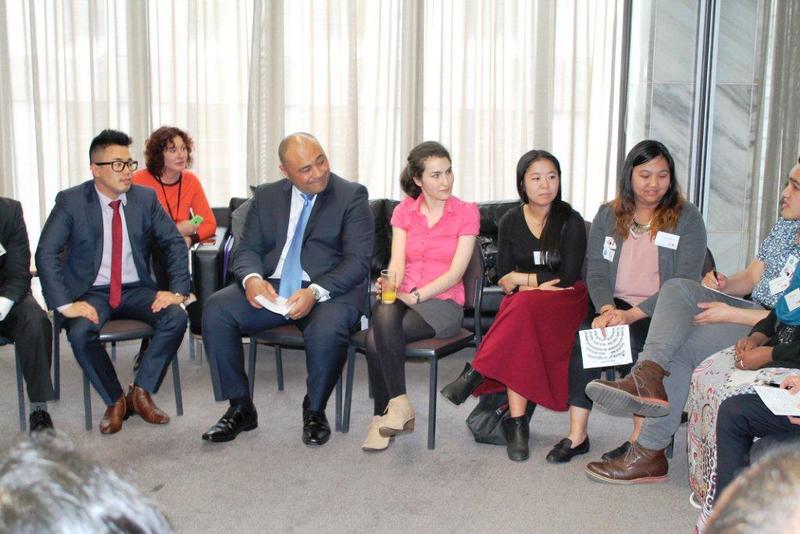 Legend has it that the PM refused to live in the luxurious estate provided, but rather preferred simple accommodation. Along with the hundred year old Poll Tax certificates and their faded sepia mug-shots of early Chinese migrants to New Zealand, these precious objects serve as poignant reminders to the young ethnic leaders that their memorabilia could also end up on display in Archives one day in the future.

This was a very special occasion. The first group of 30 graduates from a government initiative for young ethnic leaders from across New Zealand were being recognised at Parliament, to “further develop their leadership skills and understanding of the public sector environment with a view to considering a career in this area.”

The group; alumni of the 2012 pilot and 2014 Young Leaders Programme under the Office of Ethnic Communities, were being treated with a tour of the archives and of parliament where they could observe question time before the highlight of the day; a meeting and Q&A session with the Minister for Ethnic Communities Hon. Peseta Sam Lotu-Iiga and the opportunity to share with the Minister their aspirations for the future and to hear about his career path.

So how are these handpicked 30 young leaders from across the country going to make a crucial difference to their communities in the future?

This annual programme started in 2012 under the wing of the Office of Ethnic Communities to encourage leadership among youth within ethnic minority communities. Representing their communities, these young leaders come from an incredibly diverse range of countries and cultures with stories to share including; Kenya, Ethiopia, Myanmar, Vietnam, South America and more (25 ethnic heritages at least).

The programmes are available across the country and run from March to November each year. The official website states that; The Young Leaders Programme aims to build leadership potential and improve knowledge on how to succeed within government for young people. Successful candidates join a diverse team of 60 young people from around New Zealand to engage in training opportunities over nine months. 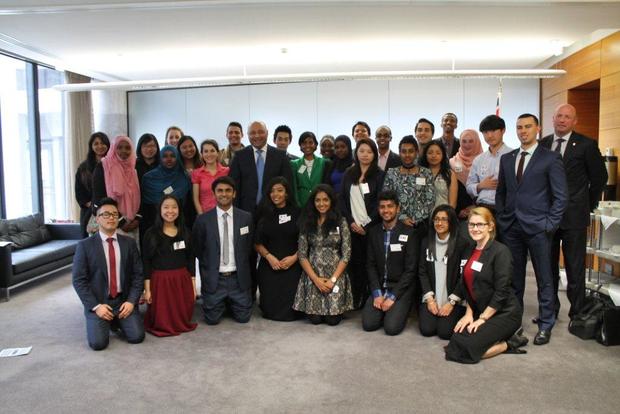 They must be between 16 to 24 and be migrants, refugees, long-term settlers or people born in NZ who identify their ethnic heritage as Asian, continental European, Middle Eastern, Latin American or African. They must also be interested in a future government career.

In a private function room at parliament the group are seated in a large circle around the Minister. After a round of self-introductions and the provocations of  ‘I wonder – “ or ‘I wish –“ the Q & A session with the Minister kicks off.

One young leader wonders what our country will look like 20 years from now, when they may well be in positions of law and policy making. The Minister responds by saying he wonders where all of these young leaders will be in 20 years. He tells the group he believes they are already leaders; that becoming a leader is not a destination – they are there already.

Tara Officer, 25, is an Iranian New Zealander with lots of experience working within her community. She has big dreams of becoming leader of the World Health Organisation one day, or failing that, Minister of Health in our future government instead.

She asks the Minister about ethnic youth and their role in the future – what affect he thinks that the Office of Ethnic Affairs will have on the private sector and whether connections can be made to promote ethnic diversity.

The Minister replies that many in the corporate sector see the benefit of reflecting the communities that they serve – having hiring practices that are progressive, but also pushing these staff up into the leadership roles. He tells the group he believes there is positive work happening in the private sector in this sense.

Another young leader asks the Minister if he has experienced racism or discrimination as barriers during his career. The Minister replies yes, that he has. He came to New Zealand as a child in the 1970s. As a Samoan and a new migrant with English as a second language, he experienced discrimination, but he tells the group that regardless, the opportunities are there now to break this down. 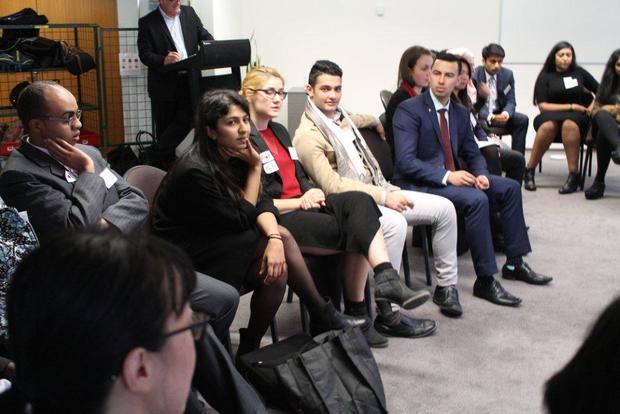 The Minister tells the young leaders to hold true to their cultures and values, to be proud of where they come from, that diversity is a benefit but how to bring that into public policy is the question. The Minister tells the group to surround themselves with people who support them and to be courageous.

During a break I ask some of the young leaders to tell me their story:

Fatumata Bah and Lincoln Tam are graduates of the 2012 pilot programme. Fatumata Bah tells me that she made great friends on the programme and it gave her the opportunity to challenge the stereotypes of Muslim women – she tells me that as a “black woman in a hijab” she faces discrimination on a regular basis but the Ministers words about courage have stuck with her.

Lincoln Dam is currently a PhD Candidate and Research Assistant at Te Puna Wananga, the University of Auckland. He also Chairs the NZ China Trade Association – Young Associates. The pilot leadership programme planted the seed for his PhD thesis which explores providing a framework for bi-culturalism and multiculturalism working together in politics and governance in the New Zealand context.

Lincoln sees biculturalism being about power sharing between Maori and Pakeha but he believes that multiculturalism must be invited to share in this power – not contesting for rights – but more in the sense of cultural recognition; acknowledging a rich cultural diversity of New Zealand people which our government should also cater for.

Shail Kaushal is doing two degrees at the University of Auckland. He has already experienced being a candidate at a local council level in Auckland, and is keen to work within the Ministry of Foreign Affairs and Trade one day. Shail is undertaking honours in politics, international studies and also immigration.

Shail has already led a study camp of 34 future leaders from the Asian-Pacific region to Taiwan. So MFAT can probably expect to see Shail in the near future. He was keen to ask the Minister what his future policy plans were for youth from the ethnic communities.

Young Leader Daniel Camilo Gamboa is a student who survived frightening experiences as a refugee from Colombia, and is naturally driven to help refugee communities.  He is the President of the NZ National Refugee Council – two years ago they created a Youth Council for refugee youth, and now they welcome newcomers. 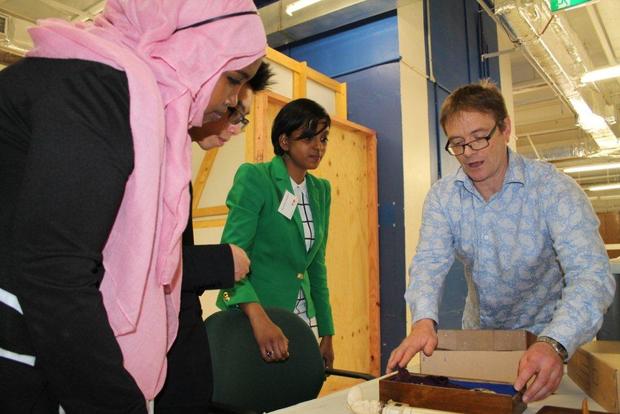 Back at the Q&A session the Minister delivers his last piece of advice to these young leaders about overcoming any barriers to their future dreams;

"Diversity can build up rather than break down. Some of the most enduring change that you can see in society is not by the hard hammer of the law but by changing attitudes at a community level. Those things are harder to do but that’s what leadership is. It’s communicating that view at a grass-roots level.

How do we promote diversity in representation, how do we get ethnic people involved? We need to go right back to first principals; ethnic people have got to put their hands up – I always encourage people to get elected. Work out who you are and the values you stand for – work out the values of each of the parties – do these parties match my values?

Pick a party and get involved in democracy – understand how the political system works. More of us need to take this positive step forward – regardless of your political orientation.

Can we do better? Of course we can – but we need to step up, individuals need to put their hands up."