We didn't know any better but as I got older I questioned the caste system. I remember being in India and giving the 'untouchables extra money' - they looked at me like I was a goddess but I was just one of them, I sat on the ground with them. We are all the same. - Leela Patel (Actor) 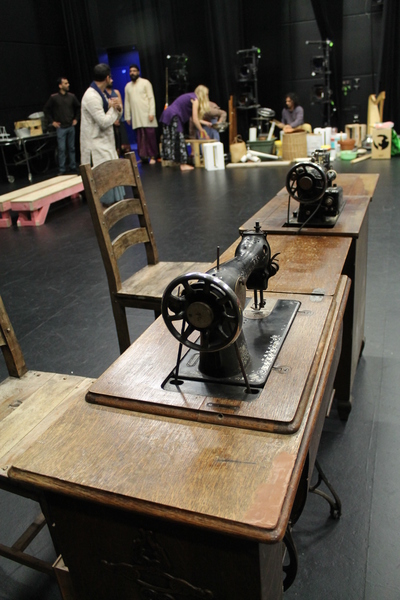 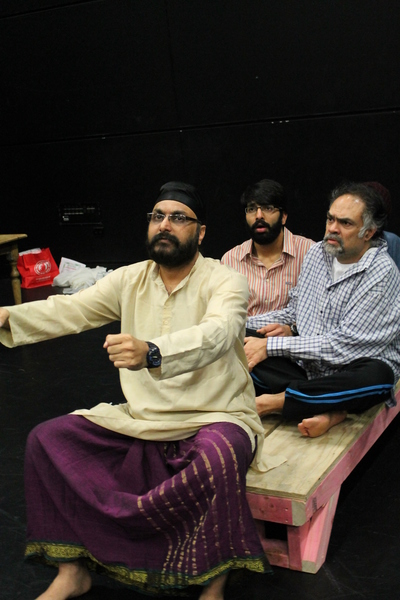 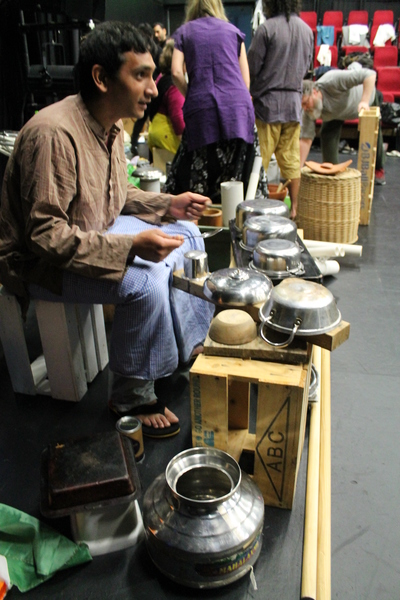 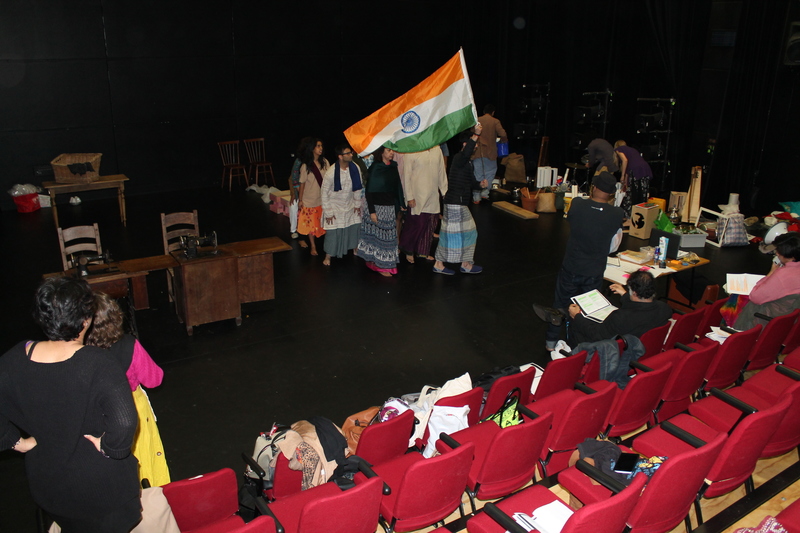 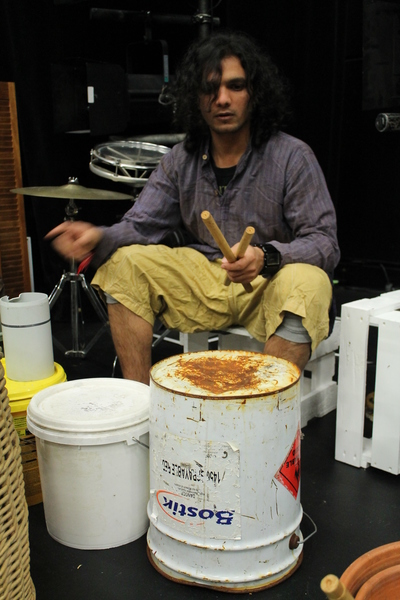 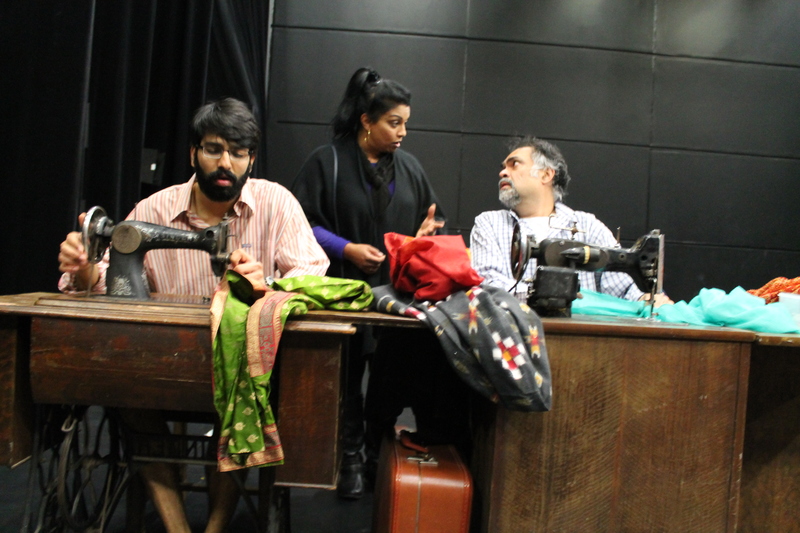 Dina talks with her two tailors 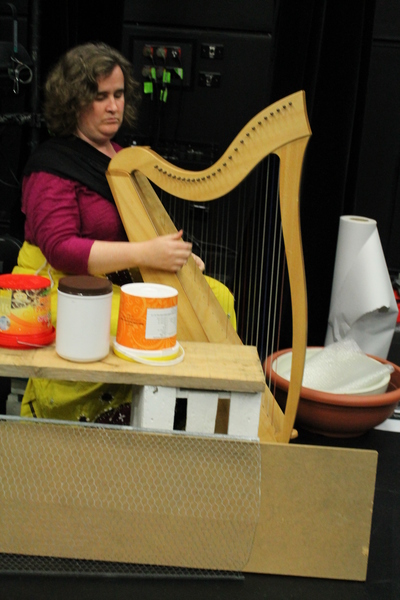 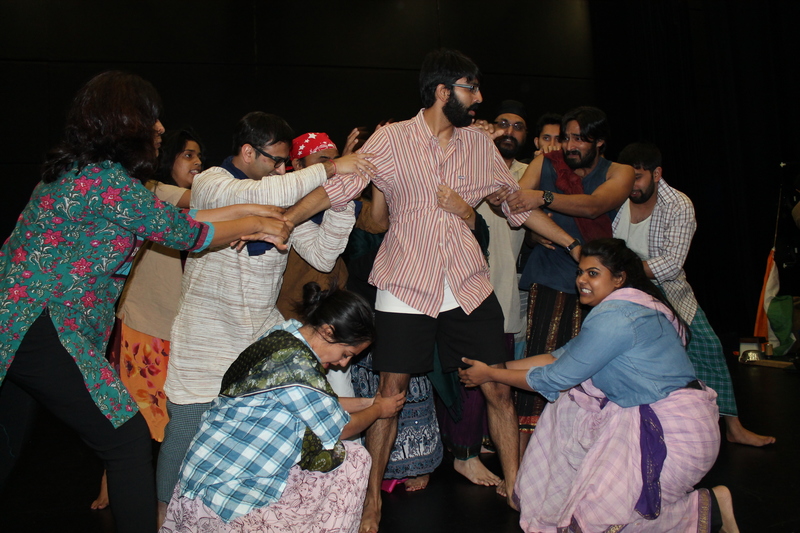 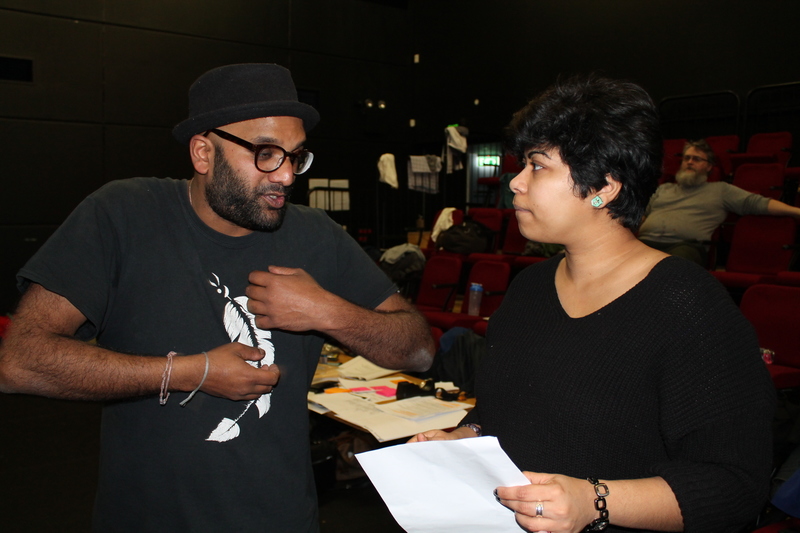 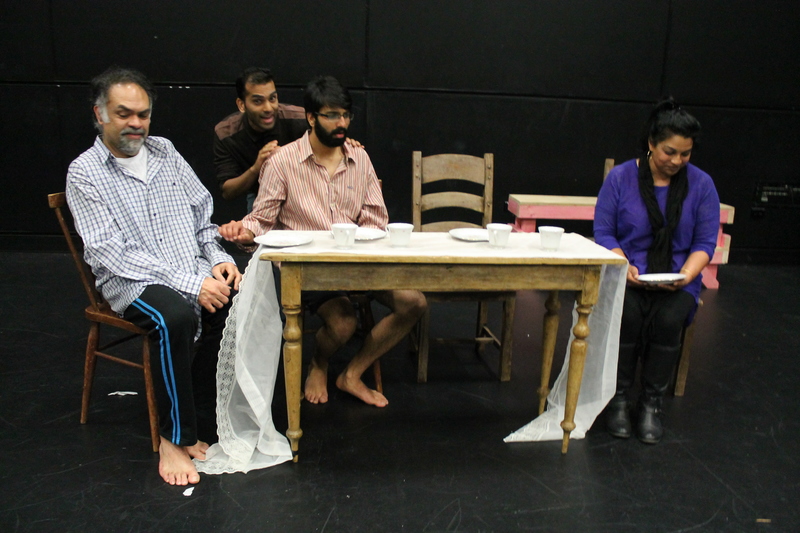 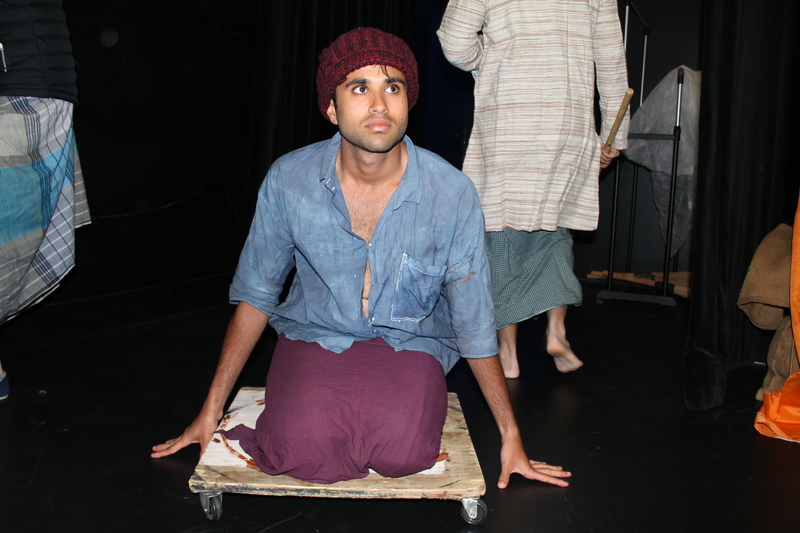 Images taken at the rehearsal of A Fine Balance, photos by RNZ Lynda Chanwai-Earle

Driven to tell epic stories of the human spirit Prayas Theatre are premiering the stage adaptation of Rohinton Mistry’s A Fine Balance, shortlisted for the Booker Prize in 1996.

In their annual spectacular Prayas bring a 25 strong cast to Tapac Theatre in Auckland, along with a group of musicians performing with found objects live on stage – to transport the audience back in time, to India.

A Fine Balance is set in Bombay, between 1975 and 1984 during the turmoil of The Emergency, when President Indira Ghandi's government cracked down on civil liberties and drove thousands of poor from their homes in an effort to “clean up the city”.

Prayas wanted to recognize this year being the 40th year anniversary of The Emergency by staging the adaptation based on the novel. The Emergency was in effect from 25 June 1975 until 21 March 1977.  The prime minister had the authority to rule by decree, allowing elections to be suspended. Many of Gandhi's political opponents were imprisoned and the press was censored. Other atrocities reported included a forced mass-sterilisation campaign making this time one of the most controversial periods of India's post-colonial history.

A Fine Balance - the story:

The book concerns four characters from varied backgrounds – Dina Dalal, Ishvar Darji, his nephew Omprakash Darji and the young student Maneck Kohlah – who come together and develop a bond.

They are four very disparate strangers. Maneck is a young and affluent student, the two tailors Ishvar Darji, his nephew Om have fled the violence of the caste system in their village and the feisty widow Dina is a business woman alone struggling to survive. All four are forced to live in a cramped apartment together during The Emergency, where they learn to move from deep distrust to deep friendship.

Ironically set in the 70’s many social issues like the discrimination suffered under the Hindu caste system are still issues faced by many New Zealand Indian's today.

Prayas Theatre like to challenge their audience with content but also present with a balance of humour and lightness so as to not alienate them - and so fittingly on the theme of "balance" - I attended during rehearsals on the main stage at Tapac Theatre in Western Springs, Auckland to learn more.

Looking for Sri Lankan Director Ahi Karunaharan meant dodging the waving pickets of the cast as they relived the throes of a protest in the slums of Bombay. 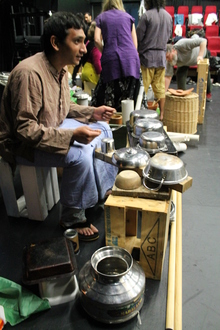 It felt and sounded very real; the soundscape was percussion driven with found objects that could be bits of rubbish from the streets, mingled with the authentic colloquial language of the streets of Bombay, the 'Hinglish' (Hindi and English) script bought to life off the page by the passionate Indian cast.

I found Ahi right in the centre of the 'protest', getting into the dynamic action with everyone else.

Prayas Theatre has built up a vibrant reputation in Auckland's arts industry. The Prayas Theatre Group is a not-for-profit organization formed by Indians living in the Auckland regions. ‘Prayas’ literally means “an attempt” in Hindi. The plays produced attempt to" reach out, share and integrate with the wider local population through theatre, music, song and dance."

Founded around 2005, Prayas has produced one spectacular show per year, based on the writings of noted Indian authors and playwrights but performed in English. Prayas sources its talent from the diverse Indian and South Asian communities in Auckland and have also developed its own work based on the experiences from within the community.

Social issues that are particularly pertinent to South Asian New Zealanders are discussed and debated within their productions. Prayas likes to challenge their own communities as well as the wider audience by questioning social issues such as culturally sanctioned crimes like forced marriage, issues that continue to affect Indians and South Asians living here.

After the rehearsal I head backstage with actor Mayen Mehta (playing the student Maneck) and Ahi. They tell me that some of the Prayas cast actually lived through the State of Emergency, the time of turmoil was part of their personal history.

Founding Member of Prayas Amit Ohdedar, who plays Nusswan Shroff (Dina's brother) in this stage adaptation - was actually a student living in Bombay at the time.

Amit's own personal beliefs and values are opposite to that of his stage character Nusswan. The character Nusswan portrays views that are very pro the rules imposed by Indira Ghandi, rules that resulted in widespread brutality and death in Bombay.

Amit actually witnessed much of the atrocities that occurred at the time and was instrumental in the drive to get 'A Fine Balance' to New Zealand audiences. When they share their stories with us, we ask how much has really changed? Many of the issues are still current. 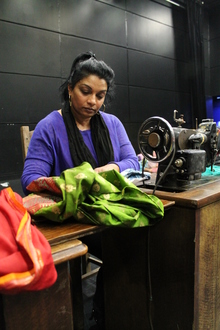 Dina Dalal is played by Leela Patel who has had roles on Shortland Street and the 2008 NZ feature film Apron Strings. Leela loves playing her big-hearted character Dina but what is disturbing for Leela is how close to the bone the issues in the play are to her own life.

Born in New Zealand and from the Hindu community, Leela personally rejects the caste system and it's brutal treatment of the 'dalits' or 'untouchables' (used to refer to people who were once known as “untouchables”, those belonging to castes outside the fourfold Hindu Varna system).

Leela grew up experiencing the 'extreme caste system' even here in New Zealand, where her own family forbid her to have contact with 'certain people in the community from a lower caste.' Leela has openly challenged her family, both here in New Zealand but also during visits to relatives in India.

It might be the 40th Anniversary of The Emergency but Ahi says that when he sees current news headlines like the 'great city clean ups' that happen around events like the Beijing Olympics, he asks how much has really changed. Meyen tells me that he wants to convey the passionately humanitarian message of the script.

Just as Bollywood movies are increasingly reaching more diverse audiences, the Prayas Theatre Group in Auckland, New Zealand, is sharing the work of Indian playwrights with a broader audience.

The Prayas Theatre Group is a not-for-profit organization formed by Indians living in Auckland. The word ‘prayas’ literally means “an attempt” in Hindi and the group represents an attempt to reach out, share and integrate with the wider local population through theatre, music, song and dance.

Since 2005, Prayas has produced one show per year. The shows are all based on the works of noted Indian authors and playwrights but performed in English. Bringing together talent from across the diverse Indian population in Auckland, the plays discuss a range of social issues – a thief with principles, institutional double standards, meaningful yet forbidden relationships – with liberal lacings of humour and a few surprises.

Prayas has also developed its own work based on the experiences from within the community. In 2009, they created, Khoj – The Search, the story of the 12,000 kilometre journey of a young man from Colaba, Mumbai to Sandringham in Auckland. Using Canadian author Rohinton Mistry’s debut collection of stories, Tales from Firozsha Baag as their inspiration, they held a series of theatre workshops with community members to incorporate local migration stories into the script. Says one character, “New Zealand has embraced us with open arms, given us our home. But it is a pity that that we still feel we are outsiders.”

About two thirds of all migrants from Asia to New Zealand settle in the greater Auckland area. Between 1986 and 2006, the Asian-born population in the Auckland region increased by about 50%. In the 2006 census, there were more than 75,000 people of Indian origin in the city of Auckland.

“At Prayas we believe that initiatives have to be taken by minority communities to integrate. [With Prayas] “…our aim is to build and enhance the community’s image and to engage the wider New Zealand society,” says Amit Ohdedar, the group’s Founder-President.

The first play performed by Prayas was Habib Tanvir’s Charandas Chor, the story of a thief with principles. The show brought out more than 550 people (largely from the wider New Zealand community) for the performance. By the third production, a play called Our Street, the audience turn out had exceeded a thousand.

“The biggest success of Prayas is how it has managed to integrate with various community groups across New Zealand through the language of theatre. Emotions are universal, and Prayas and its theatre group portrayed this convincingly to an audience.” says Sudeepta Vyas, General Secretary and Producer of The Terrace (2007).

Prayas is also actively working to extend its reach and impact. The troupe itself now includes New Zealanders of various ethnicities, from South Asians, Pacific Islanders, Maori and Europeans. It is supported by numerous organizations, including the ASB Community Trust, the Asia New Zealand Foundation, Auckland City Council and Creative New Zealand.

In 2008, the Auckland City Council invited Prayas to join other ethnic arts groups to develop a play called Our Street, showcasing the city’s diversity. The Prayas contribution involved a story where two families, a North Indian and a Samoan, separately prepare for the weddings of their eldest daughters and the ensuing complications. The performance, held in the Auckland Town Hall, introduced multi-ethnic audiences to new cultures and music.

Prayas has also been recognized by the larger artistic community. In December 2010, the group was invited to perform as part of Random Acts of Christmas, an Auckland street theatre festival that included other companies from around the world. It gave Prayas the opportunity to perform for audiences that were more mainstream than their usual mix. It also allowed them to follow through on their initial inspiration: to reach out, share and integrate with the wider local population through theatre, music, song and dance.

- See more at: http://citiesofmigration.ca/good_idea/prayas-indian-theatre-in-english-for-all-new-zealanders/#sthash.lwhWmffa.dpufMayen and Ahi tell me that they also see humour, hope and lightness in A Fine Balance.

Our objective with the audience is to transport them back to this time, to take them on this journey ... if they walk out in laughter and in tears then we've done our job. It's India's story - on the scale of Bollywood!

And timing it with the upcoming Diwalli Celebrations, A Fine Balance is currently performing at Tapac Theatre, Western Springs, Auckland until 18th October this year.

And in the future for Prayas?

Prayas Theatre wish to gradually forge links with other Asian/minority communities in NZ to establish a NZ Diversity Theatre/Performing Arts Festival/Day. They also envisage an Advisory Panel from theatre/performing arts personalities and community leaders who promote such diversities of art.