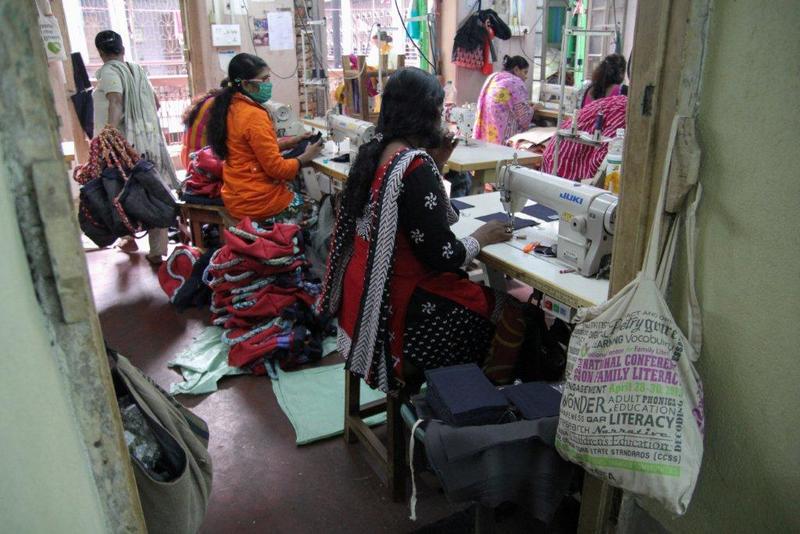 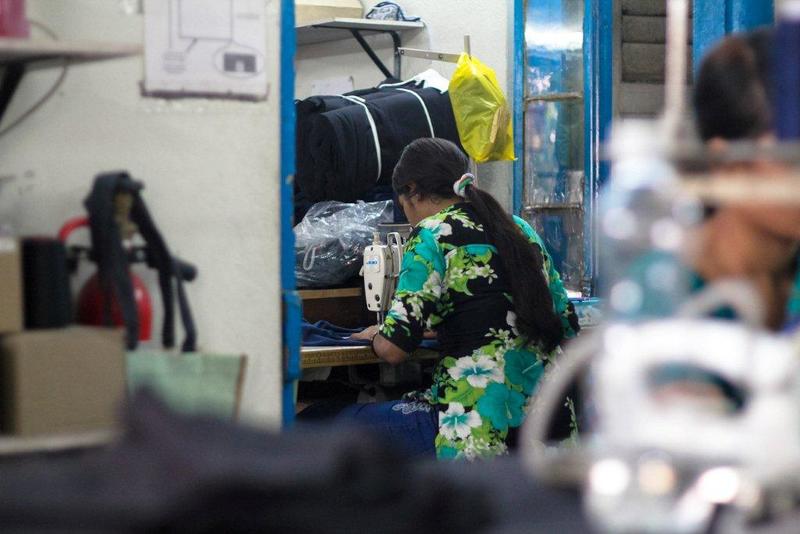 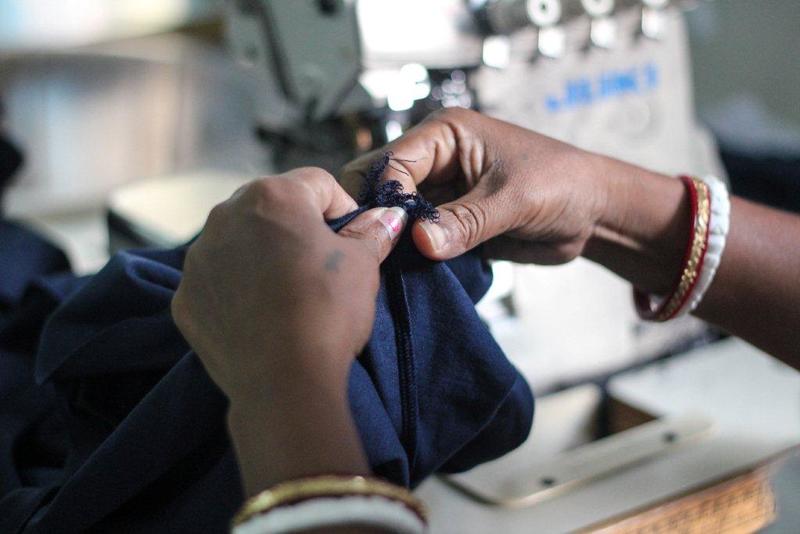 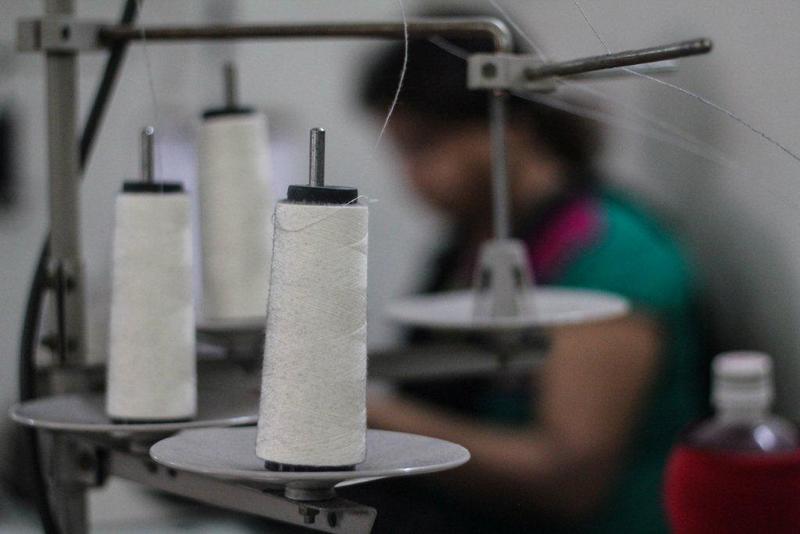 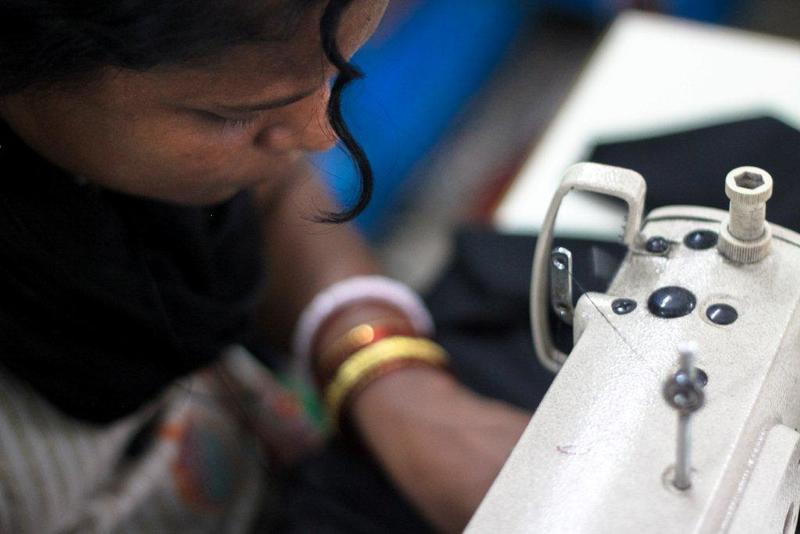 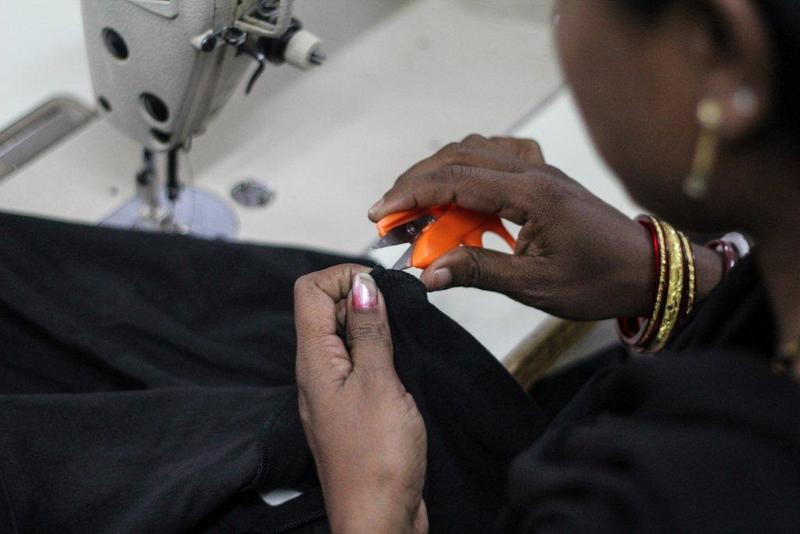 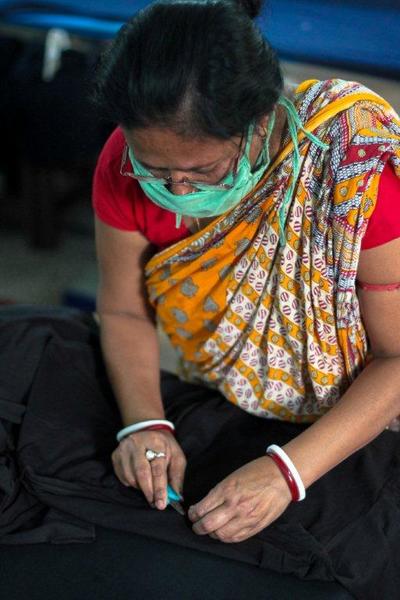 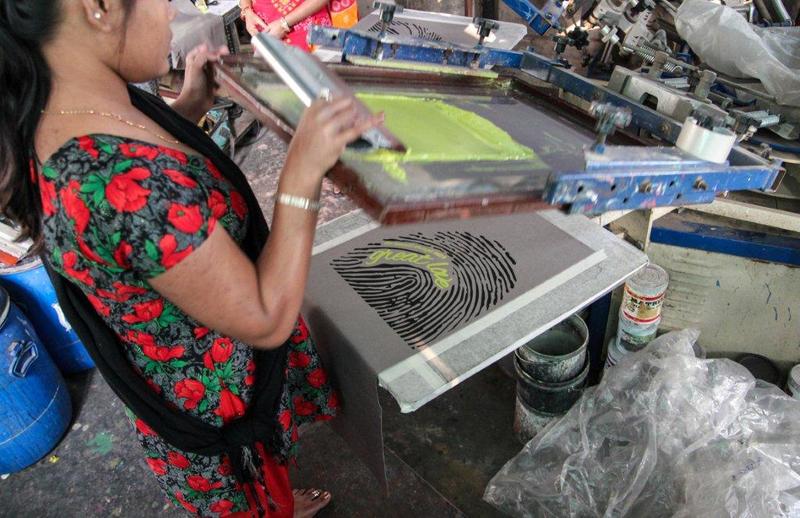 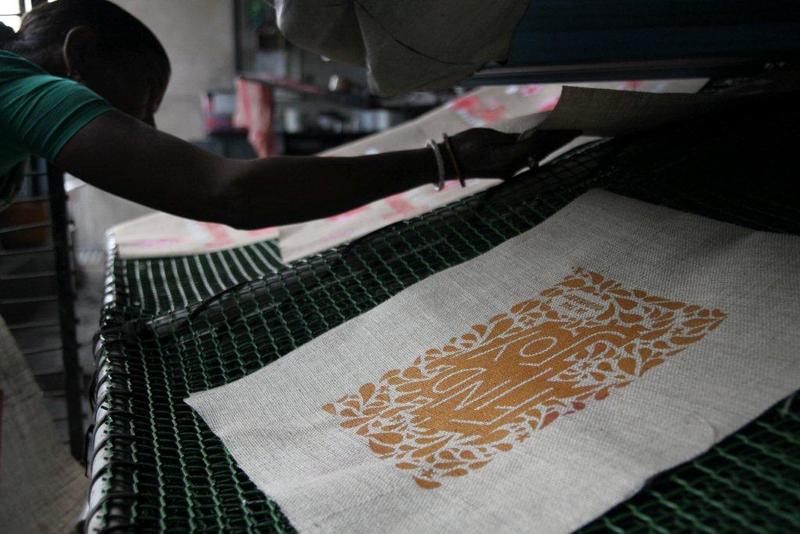 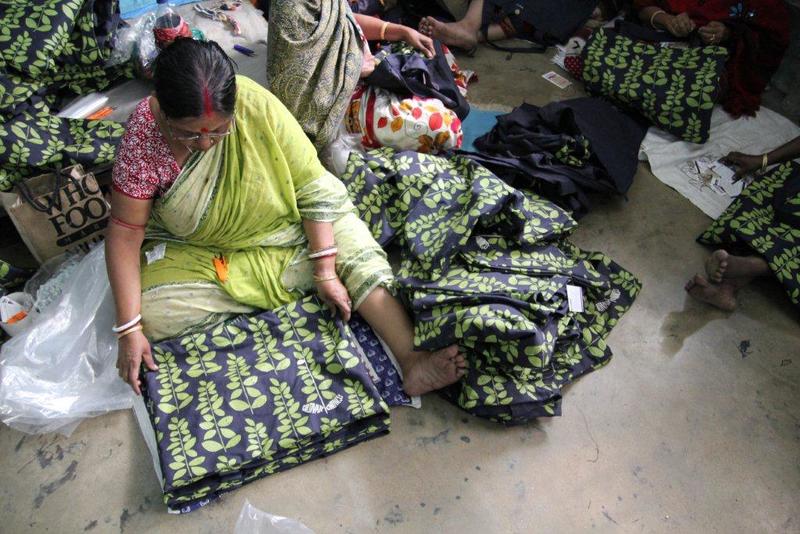 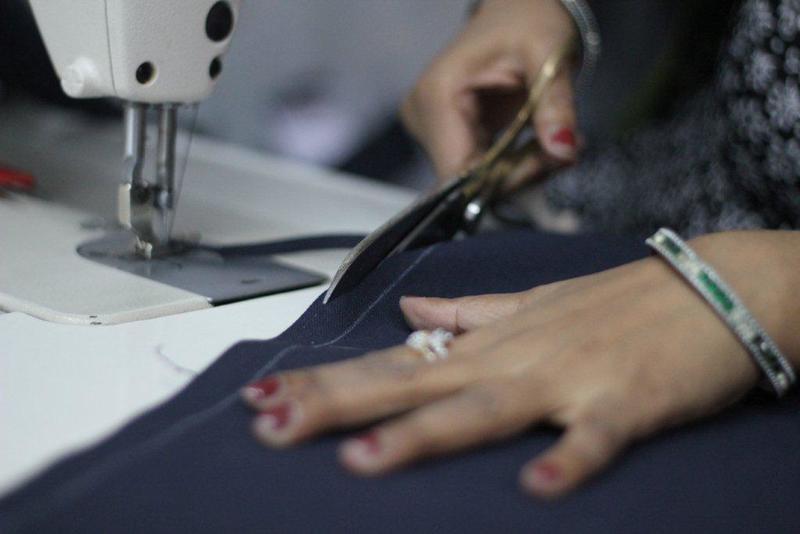 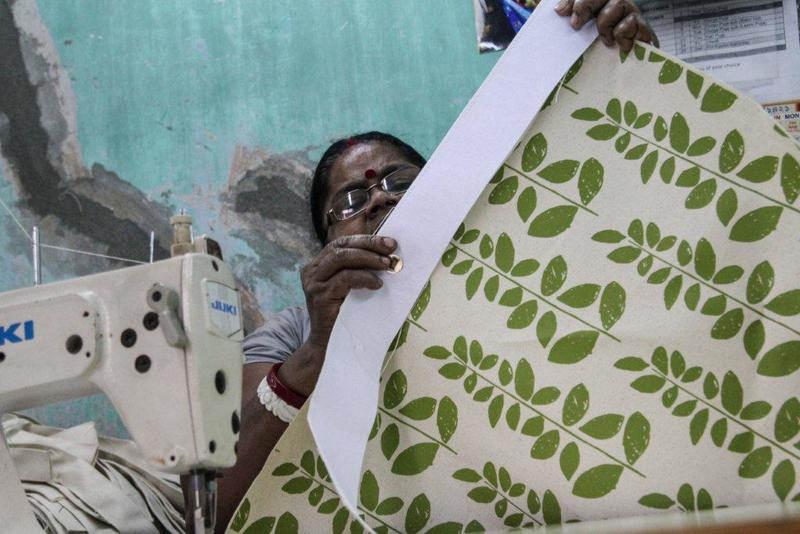 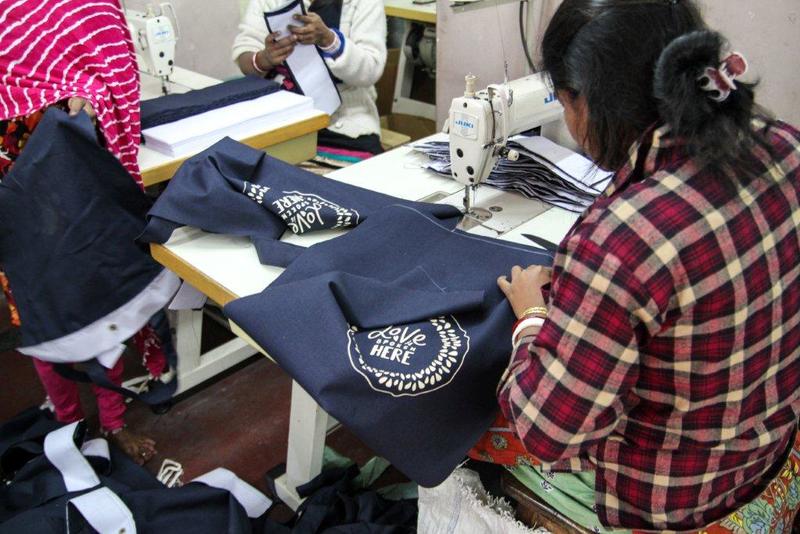 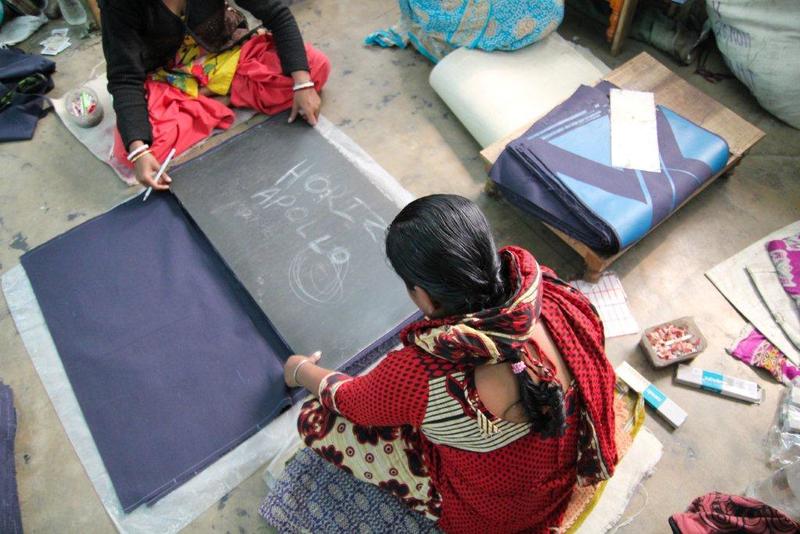 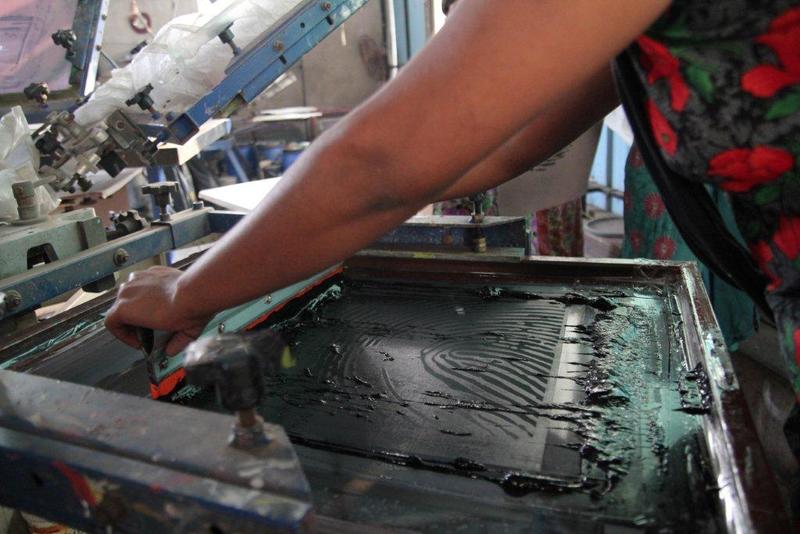 At thirteen, Sonali* was stolen from her village, dragged to the back streets of Sonagacchi and sold into prostitution. Her first customer drugged and raped her unconscious body.

Bashanti*, a daughter of poverty-stricken parents, was sold into the sex trade by her mother, sacrificed so the rest of the family could eat.

Ever wondered about where your organic jute and cotton bags and apparel came from and the story behind the woman on the sewing machine?

In 1999 Kerry and Annie Hilton left New Zealand with their four children and moved to Kolkata to work and live amongst the poor. Naively, they signed up for an apartment in the middle of the day. It was only when Kerry was taking a walk at night that he discovered they had moved into the largest red light area in the city, Sonagacchi. Their new neighbors were thousands of women forced into prostitution through trafficking and poverty.

To make a difference, that would bring real freedom for these women, the Hiltons understood there needed to be a business alternative. Initiated by the Hiltons,this social innovation business in India is called Freeset.

Freeset opened its doors in 2001 with twenty women brave enough to trust a couple of foreigners and seize the opportunity to leave the sex trade behind.

... And then another New Zealander left his life of broadcasting here and decided to dedicate his time to this altruistic organisation.

The flickering images from the trailer of the documentary Calcutta Hilton show Indian women of all ages standing in an endless line on the side of the road in the infamous red light district of Sonagacchi, waiting to be bought for the night. Similar images are used in the promotional videos for Freeset and the message is the same – Sonagacchi is hell on earth if you are a woman and you are trapped in the sex industry.

“It was a very painful life in the line, there were days when I didn’t eat,” says one. So many girls and women trafficked from rural India, Bangladesh and Nepal, driven into the sex-slave trade in India. There are around 10,000 of them.

Thousands of miles away in Christchurch, the Asia New Zealand Foundation is celebrating leaders in social innovation at a hui. Social innovation by definition is a broad creative process of problem solving for society and can be applied to NGO - not for profit work but also to private and public sectors.

John Sinclair is one such leader presenting at the hui. Right now we're sitting in the sun far from the reality of life for the women of Sonagacchi. 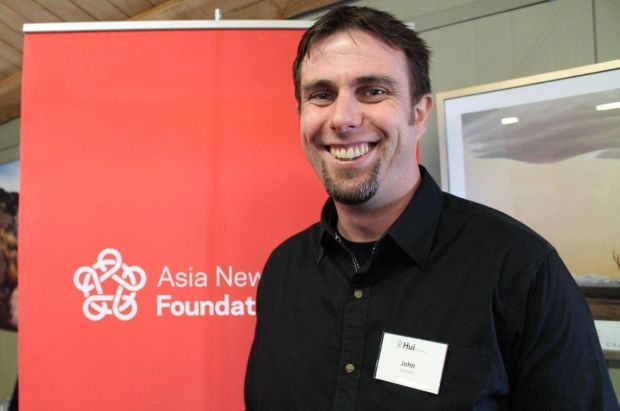 Broadcasting to manufacturing, a radical change, how did that come about?

John has been involved with Freeset since 2003, two years after it's initiation and opening. John had heard about Freeset and the Hilton's (and their 4 children!) trying to make a difference in Kolkata, so he and presenter Evie Ashton decided to travel there to make the documentary Calcutta Hilton for TV3. After filming in 2003, John lived and worked in Kolkata for 12 months over 2004, editing the documentary before premiering the finished piece in 2005.

Since 2006 John has lived in Kolkata fulltime - coming back to home for a month each year to catch up with family.

John explains that Freeset and the work of the Hiltons grabbed his heart. He had started out wanting to make a substantial documentary, but then Freeset became something he wanted to invest his life in. He moved from the role of communications Manager to the General Manager of Freeset bags and apparel.

It's a social enterprise - so a lot of things come with that which are unconventional.

"Unconventional" to say the least. For a start the location of the Freeset manufacturing building stands right on the edge of Sonagacchi. I ask if the pimps and brothel owners see their presence as a threat? "Yes." says John, "Some of them do, and now Freeset is expanding, purchasing a new building right in the heart of the red light district - which might ruffle a few more feathers."

"My parents were very poor, so I never learned to read and write as a child," says one woman. "I couldn’t write my name, I couldn’t do that before I came here ... I’m so happy I can do this, now I want to learn more..."

What about the issue of child labour?

"You can't just expect these desperately poor people to not send their children to work rather than starve, but as a global community we need to find ways of ending child labour. There's got to be an alternative. You've gotta have education and then opportunity, otherwise what are they going to do?"

John still struggles with the concept of a family in such dire poverty that they will sell one of their young daughters into the sex trade. "Sometimes it's ignorance, especially in the rural areas with pimps looking for vulnerable families - offering to take daughters for a jobs as "maids" doing housework in the city - it sounds good until the girl is gone, and then it's too late."

13 year old girls are imprisoned in small rooms in the "prime" of their earning potential - these girls are highly controlled, literally caged. The girls that are forced into the sex trade at 13 are really locked in - they start off in a real prison which then becomes a psychological cage, so that they are scared to step outside of the confines of that. It's heartbreaking.

"This one moment will change these girls lives radically forever and then they are trapped. Even years later when these women keep sending money home, they are shunned by their family and treated so badly that sometimes they don't even want to go home to visit."

But what if a girl of 13 is going to be sold to the sex trade and put to work? Would Freeset take her in and give her work?

"No," says John, "Freeset tries to step-in to send the child to school instead. However they aren't an agency that performs child rescue, there are many other agencies that perform these roles and plenty of inter-agency co-operation to deal with these problems."

John explains that even Freeset as a business is not "the" answer. "A lot of things seem black and white coming from middle class New Zealand until you're confronted by the reality of a place like Sonagacchi. Then you understand there is a lot more grey to life."

Freeset look at helping the women who are trying to leave the sex industry - to find an alternative to this work. This process can take years John tells me; it's about overcoming the psychological cage. "We see the pain that's there and we want to offer them a different option - but do they really want that? They've gotta want to step away from the sex trade."

What's the minimum working age in India? "Legally children should be in school up to the age of 14," says John, "From the age of 16 to 18 Freeset will consider taking young women on but Freeset would prefer getting them into school first. We work through these process - it's important not to legally compromise ourselves."

What about the children of sex-workers or women with HIV or TB and other diseases who need health care plans?  Freeset offers this:

The women are paid around twice the going rate for an equivalent job elsewhere and as part of their employment package have health insurance and a pension plan. A woman is employed full-time to ensure that staff are able to access their health insurance entitlements.

Sustainability is their biggest challenge in being a social innovation business. Freeset is becoming different entities - 190 staff and growing. There are at least 10,000 women in Sonagacchi alone - so Freeset has started a business 'incubator" to encourage other businesses to come in, to create more alternatives for the sex workers.

How do you sustain yourself? I ask. All the foreigners like John are voluntary workers - funded by donations. He explains that it's the generosity of donations that help to fund his role as General Manager of the business.

"It's important to let the women know that once they start at Freeset then they must give up sex work. It's not freedom unless they step away from the sex trade. Some of them face real issues - education of their children, expensive rent (red light district rates are crippling), or addiction."

Addiction is serious challenge - one woman worker is a recidivist addict who regularly falls of the wagon. John recalls scary moments when this woman would end up chasing others around with a knife, but ever positive, he celebrates the couple of years that she is sober.

"Maybe she'll celebrate 3 years off addiction this time." John has known this woman for 11 years. He tells me that it's important to see the progress, this woman can now tell others that she is struggling - this is a great step forward.

"Even in the despair you have to look at the positive - you know you can't "save" 10,000 women at once. It becomes over whelming if you think of it like this. You have to deal with [the problem] one relationship at a time, one person at a time - and then each of these women can input into others' freedom. The community then becomes self supporting." 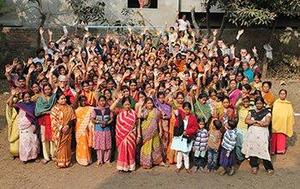 Every woman who finds freedom through Freeset also brings freedom to her family. They find hope for a brighter future and the means to make it a reality. As the business has grown, a positive community has emerged calling itself the "Freeset family. This family not only supports its own members, but impacts on the wider community. The common understanding is "we're in this together".

John tells me that when they first start many women struggle to sew or do simple tasks. Lots of new trainees produce bags sewn inside out and upside down. Post traumatic stress makes them forget training easily and learn with difficulty.

John tells me that these problems are gradually over-come with training, a lot of patience and quality control systems. While many of the women are still not the fastest sewers, the business now produces around 1000 bags a day. "Consistent quality is important for Freeset to be a competitive, self sustaining business that's able to break the cycle of poverty and exploitation for these women once and for all."

And what's the personal driver for John?

They richly invest into my life. Continuing to mentor them is really special, it helps you to stay in there when it gets pretty darn hard. It's really beautiful when you see women step out of the sex industry - when they are training with Freeset. There are amazing stories of women finding solidarity with one another. You see that actually there is hope for something different.

The Freeset Trust is a charitable organization which operates alongside the business providing literacy classes, child care, budgeting and debt management services. Today more than 190 women are on their journey to freedom at Freeset.