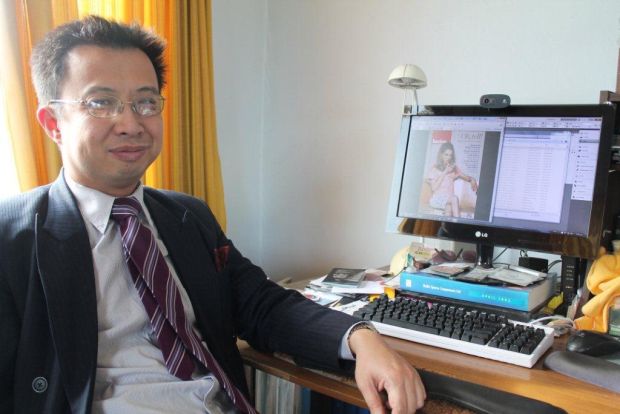 Jack Yan at his desk, the hub for Lucire Fashion Magazine. Photo RNZ

One of my ancestors got in trouble with the Emperor. We were always stirrers. I come from a family of political stirrers – centuries, going back a thousand years in China!

Jack Yan's ancestors moved from Hebei in the north of China to Táishan during the 13th century to get away from the Emperor's wrath.

So your family tree dates way back?

“We were the 201st family to be assigned a surname in China.”

Was it Yan back then?

“Yes and no – up North it was Gin. A lot of us were executed – a lot of bloodshed back in those days. So we moved to Southern China. We think of ourselves as Táishānese, which is great for politics. If you think of Chinese Mayors and politicians [across the globe] – they’re all from the same area of China, Southern China.”

It seems politics runs in the blood for Jack Yan. His illustrious family history is filled with political intrigue that spans China’s dynasties. Born in Hong Kong in 1972 Jack Yan is a Wellington entrepreneur who it seems, will never give up his dream to be Wellington’s next mayor. This perennial candidate is a man driven to make better the future of our capital city.

So what is drives this dream as well as the international success of his fashion magazine Lucire?

Jack’s sitting at his home based office in Lyall Bay next to his Lucire assistant Fenella Clarke. Fenella is doing her second year at Massey University in Arts, majoring in fashion, so this opportunity to gain work experience with one of New Zealand’s leading and longest standing fashion publishers is perfect.

Jack continues to fill me in on his fascinating family history, which largely explains their family tradition of political activism, provoking the wrath of emperors.

Jack’s family had been well-off landowners in Táishān and formerly Kuomintang supporters. After the 1940’s and with the communist takeover in China, Jack’s family became refugees – fleeing to Hong Kong.

During the Second World War Jack’s grandfather was a colonel with the Chinese Constitutional Army. On the day of the Japanese surrender – Jack’s grandfather, a pacifist, showed the family’s humanitarian side by helping former Japanese soldiers to return to their families. “War’s over, they’re just people – so he created jobs for them so they could get home.”

“In 1949 our family moved to Hong Kong – a cultural backwater in those days but soon the population exploded to a million."

Hong Kong is where Jack's parents met, married and then had Jack in 1972. Jack’s mother had gone back to Communist China to help family during the 1950’s and spent some years surviving the famine. She was ever fearful that her son might have to live through these hardships so in 1976 – Jack’s parents and their family moved to New Zealand.

Jack began school at the age of five at Saint Mark’s College in Wellington – where culture shock came in the form of exposure to a lot of New Zealand’s only television channel; Selwyn Toogood’s It’s in the bag and Play School.

Multilingual and fluent in Cantonese, Taishanese, English and French, with some Swedish, Jack eventually made Dux of St Mark's, before a scholarship to Scots College as a secondary student and early forays into publishing with school journals. Then it was a double degree in law and commerce at Victoria University before gaining an MCA, a Masters in Marketing.

Jack’s international online fashion magazine Lucire was born in 1997 during the dramatic rise of the internet – and went into print in 2004. From humble beginnings Lucire now has over a dozen photographers and a cosmopolitan team of contributors across the globe.

“In 1997 I decided this was the way to go – I fell in love with the world-wide web. We were the first commercial on-line fashion magazine in New Zealand. At the time there were people going; “What is the internet?”"

"It was a tricky time but at the same time it was incredibly profitable. The predominant readership – 70% came from the U.S. There were even Kiwis who thought we were an American publication.”

Why the title Lucire?

“The name was thought up by my friend, designer Sylvie Poupard-Gould. She was learning Italian at the time – and Lucire sounded nice. It looked a bit like the word for light Lumiere – so it stayed.”

Lucire is 18 years old as a fashion publication – that’s an achievement, isn’t it? 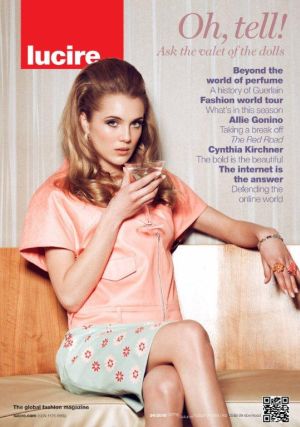 “We had beaten Vogue – there was no such thing as on-line fashion magazines at that time – we have survived 18 years. It could have gone belly up in 2001 – after 9/11 all the US clients cancelled ad bookings and a lot of online publications went to the wall.”

“I was lucky I had another business – typeface design – I was designing fonts. I could have become a very famous calligrapher in Wellington or a famous typeface designer internationally. I chose the latter. My success with global font design got me involved with the international brand company The Medinge Group, a not-for-proﬁt branding think-tank which aims to inﬂuence businesses to become more human and humane and of which I am a member.”

We decide the best place to talk politics and mayoral runs would be strolling through a typically windy Wellington day in Civic Square. We find ourselves standing strategically right beneath the Mayor’s office. Jack explains his visions to make our Capital a better place.

When were you first inspired?

“During the mid-2000’s. I thought it would be good for the city to have an internationalist to make Wellington a lot more technology based because I believed in frictionless exports – that were friendly to the environment – to see this in the future. It seemed like a no-brainer – the next Mayor needed to come from these industries.

Global enterprise that is “frictionless” – why not? It’s sensible way to be.

"We have the greatest number per capita of intellectual capital base - million dollar green businesses and industries. We have a great creative base here – film, design, high tech software – a lot of young people that want to be in these industries too. We’ve got talent coming through computing and engineering at Victoria University – yet none of these graduates are getting connected up to the jobs downtown – let’s do a media lab to get internships for young graduates  – Mayor Peter Chin did this, if Dunedin can do it – why can’t Wellington?”

“Another strength - we are a very internationally minded city – very global. Wellingtonians identify with being Wellingtonians – we are a unique bunch identifying with our ‘city’, we should be promoting that – we are equal to cities like San Fransisco, Stockholm, Paris.”

“Frictionless – that part is important to me because of the work I do at Medinge (Sweden) as well, in line with Sir Paul Callaghan’s visions. For example in 2010 – let’s look at the light use in the city. Why aren’t we using LEDs? One of my campaign ideas was to get more solar panels up around Wellington; I approached Vattenfall - Electricity Companies in Sweden to get an electric car network started in Wellington and Vattenfall were really keen, they really wanted to promote this in Wellington.

Where the polls were concerned – both Jack and the current Mayor Celia Wade-Brown led the youth vote with policies popular with the younger generation.

"I’ve always been 5 to 10 years ahead – my visions have taken place. In my 2010 campaign I had a desire for transparency – I was living the "sustainable, eco conscious brand". Our youth could see that in my policies, they were saying; "We support Jack because he’s about the future.""