On the streets of Wellington a running battle is fought week by week between scrawled names and the blank patchworks of paint that cover them.

On one side of the fence is the council and community scrubbing at walls. On the other, the street bandits who sprawl out into the night covering walls, bins, and lampposts with thick letters attempting to make a name for themselves.

Lucy Smith meets the taggers and cleaners in the middle. 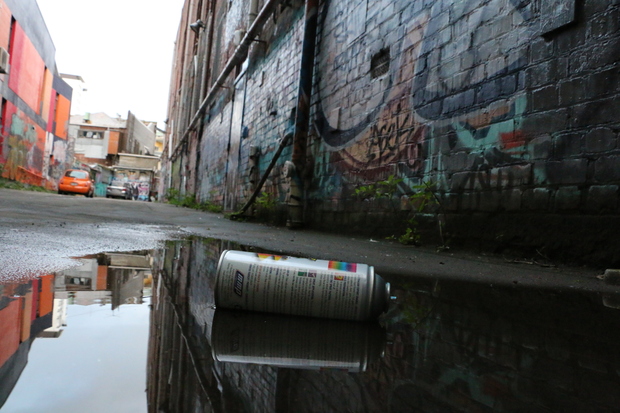 Ketty shakes a can and starts spraying a “throw up”- a simple outline of her letters that she tags on the streets. “I usually choose a route and then I just hit up tags everywhere as I walk. I first got into graffiti when I was 15 and properly started tagging when I was 16.”

Art doesn’t matter. It’s the thrill of crossing the law and earning notoriety amongst other vandals that interests Ketty.

Not everyone is as keen on a criminal record as Ketty so she’s splattering a canvas (and part of my laundry) with paint on a damp Wellington evening.

She’s a prolific tagger who has stamped her name all over the city. Usually there’s a little love heart wrapped around the last letter - a pretty little bruise on a wall. “I know that I’m not meant to be doing this, but I don’t actually care,” she says. “Graffiti is a way to escape what is going on in my everyday life and put all my effort into painting a wall” 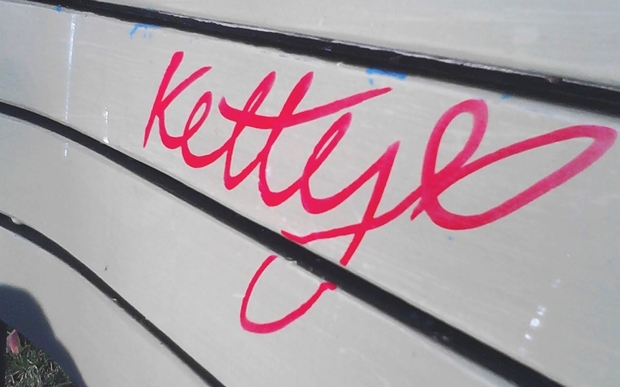 Men and women from a variety of backgrounds and ages graffiti. Ketty is known for doing "pretty" tags. Photo: RNZ/Lucy Smith

Ketty’s been arrested and fined, and threatened by other taggers for writing on their tags.

“The ultimate point of tagging is to build your own ego. It’s about building your own name or street cred. For some people that’s all they have,” says Ketty.

“I never feel bad about it because that defeats the purpose of graffiti. I know what I’m doing so why would I do it if I feel bad?”

But the law says otherwise. Under the Summary of Offences tagging and graffiti vandalism is punishable by:

Under the Crimes Act a person charged with willful damage can face up to seven years in prison. The cost to remove the damage is high. Councils across New Zealand spend hundreds of thousands of dollars a year cleaning up tagging. In the 2015 financial year Christchurch spent $800,000, Wellington $600,000 and in Auckland around four million dollars was spent on cleaning up tags and investing in preventative measures such as commissioned graffiti street art. 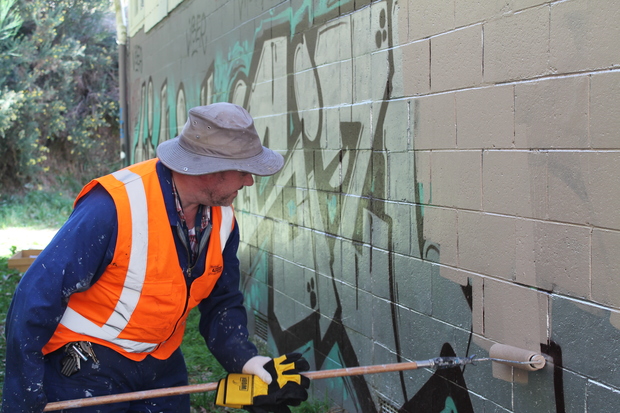 Volunteers give up their spare time and money to help clean up tags on private property. Photo: RNZ/Lucy Smith

But private property isn’t a council’s responsibility which is why initiatives in Wellington such as ‘Blank It Out” were created to help people whose fences, businesses and homes were defaced by tags. When we meet, the head of Blank It Out, Lola Liava'a Tonga, has given up her Saturday to help clean a graffiti-covered community hall nestled into the edge of Wellington’s greenbelt. She can see an alternative path for these vandals. “We encourage those people who have the potential, when you see good art, to get the permission first, get it commissioned. It could become a career for you. So we do support good art, but the bottom line is you have to get permission first” Prosecuting taggers is difficult unless they’re caught in the act but they are caught. 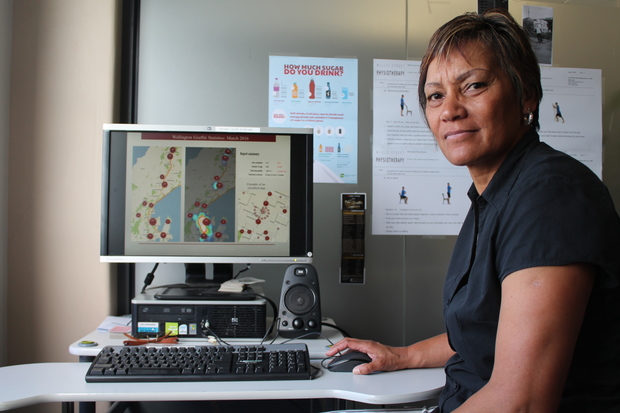 Former police officer Hine Sullivan is a graffiti program advisor for the Wellington City Council. She’s often on the frontline carrying pails of paint across the city to patch up the walls but also uses an application called Stop Tag which helps track taggers. “We can put in a tag and that will give us the areas that a particular tagger is working in. When we look at that we can actually determine to a certain degree that they live in an area, or work and go to school in that area”

“You look at a tag and you think, okay that’s in pink and it looks pretty, it’s not likely to be a bloke but we also can’t assume. [The] Ketty [tag] is so pretty, and I actually know who that person is, and I’ve given that information to police. I even know where she lives”

Offenders tell Hine it’s an addiction - that they won’t and can’t stop and she wants to support redirecting their skills so it’s not impacting on the community.

“It’s not just solely about the prosecution process in the courtroom, it’s about stopping it, and stopping the harm that it’s causing for those in the community.”

However, the news that the Wellington City Council have her in their sights did little to strike fear into Ketty’s eyes. 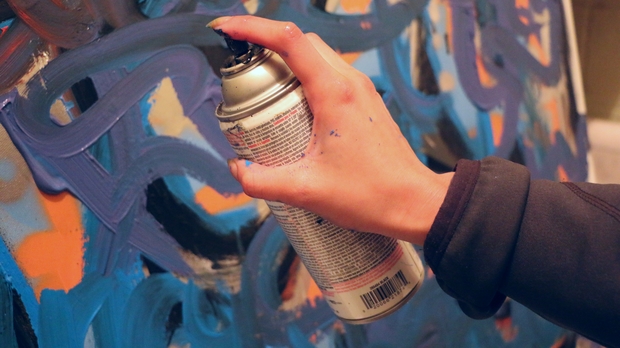 Ketty estimates she has hundreds of tags all over Wellington and has probably cost the local council thousands of dollars. Photo: RNZ/Lucy Smith

“Oh really?! I had no clue but now I know I’m pretty proud of that to be honest," she says.

"I like that. I like that a lot actually. It’s a bit of an ego boost, especially now that I’m not doing much graffiti at the moment, so it’s good to know my name is still up there.”

Ketty’s not completely ignorant of her impact though.

“I can understand why people hate taggers. It must be annoying coming home to a tagged fence. But it’s not the end of the world as people should understand. People should really just keep an open mind to it realising that maybe the kid that tagged your fence really needed your fence to survive.”

The cans have been put away for now but it’s not because she’s developed a moral compass.

“My street name ‘Ketty’ was ‘red hot’ for a bit which means if I go out tagging and get caught I’d be handed a hefty fine or arrested.” 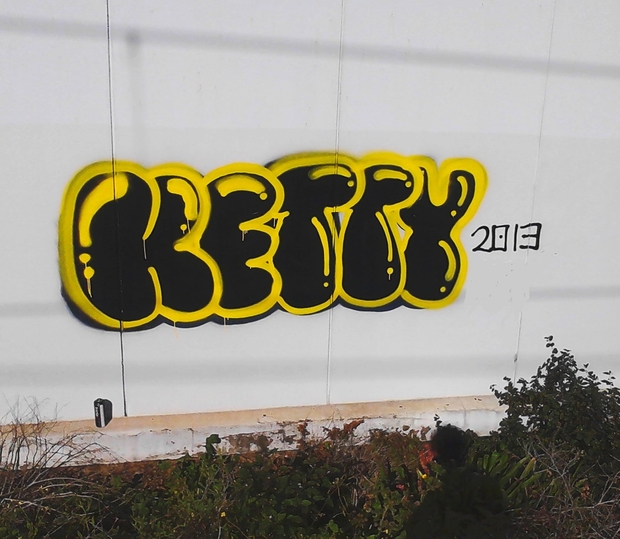 A throw up is a simple outline of letters that is quick to do. Photo: RNZ/Lucy Smith

Ketty reckons she has left hundreds of tags across Wellington and with a clean-up cost of $30-$40 per square metre, she’s cost the council thousands.

“Well I guess my taxpayer money has been put to good use, and I’m just happy that the people that had to clean it up got paid, that’s all," she says.

“I couldn’t give a crap, I mean the money’s meant to be there to be spent you know? The money’s there for people to use and for people to earn. For instance, the people who clean up the graffiti, where would they get their money if there wasn’t any graffiti?  I think in a way I’m putting the money to use.”

"Not sorry or anything what’s done is done.”