“God grant me the serenity,

To accept the things I cannot change,

Courage  to change the things I can,

And the wisdom to know the difference”.

The Sobriety Prayer; said before each meeting of Alcoholics Anonymous.

Patrick is an alcoholic. He’s been sober for fourteen years.

He remembers his first Christmas as a sober man was only a little better than his last Christmas as a drunk. His marriage was failing, and his children were sick of both their parents.His then wife told him that he was a bastard when he drank, but an even bigger bastard when he was sober. He reckons that was probably true because even though he may have got rid of the alcohol, he still had to face up to the monster he had become.

Patrick stopped drinking on the 15th of November, a day he marks as his “sobriety birthday”.  But five weeks later, on his first  sober Christmas Day his wife busily poured alcoholic drinks and left them around the house for him to find and to drink. Unknown to either of them, his daughter was busily tipping them out. So Patrick was not tempted.He spent the entire Christmas season going to as many Alcoholics Anonymous meetings as he could fit in.

There are almost two million people who belong to Alcoholics Anonymous around the world. Quite a few of them will be going to their regular AA meetings even on Christmas Day. Alcoholics Anonymous is a self-help group for those addicted to alcohol and the so called “festive season” can be a particularly hard time for them.

I have been able to go to a regular AA meeting in Auckland to meet the regulars.  And they are just a  group of regular folks, in a suburban hall. Its half past seven on a pleasant summer evening in a pleasant suburb. Tonight there are Ronald, Allen, Patrick, Paul, Mary, Charlie, George and Steve. Some are their real names, some are not.  Priscilla and her friend are here not to talk, but to give their moral support to their AA mates.

The international fellowship of Alcoholics Anonymous was founded by Bill Wilson and Dr Bob Smith in Ohio in 1935. They developed the now famous twelve step programme. Members declare that they’re powerless over alcohol, and need help from a higher power… be that the Christian God or some other.  The organisation’s name comes from part of the title of the first book  written by  the  founders and  early AA members. These days that publication’s known as the “Big  Book”,  and  this evening it sits there on the desk  for all the read. It’s well worn.

Each week those who come, come to share their experiences… around the table the participants some maybe here for the first time … will hear echoes of their own stories…  in other words they’re not alone.

Patrick started drinking when he was about nine and raided his dad’s drinks cabinet. He successfully kept it up for decades with a job that came with a large expense account.

“ I was actually a shy and nervous person , but alcohol gave me wings “

He prided himself that he only ever had the best wine in crystal glasses, and never drank before 11.00 in the morning.  thereby proving he was a gentleman. Except when things fell apart.Patrick remembers his last Christmas as a drinker. He was cooking for twenty four dinner guests and drinking steadily. He thought he was more creative with some wines in him.

“When it came time to check the turkey, I was so fed up because the cooking was interrupting my drinking. I wrenched open the oven door with such force, that the turkey flew out across the floor and  sprayed scalding hot fat around the kitchen.”

“I just looked at it “, he chuckles ruefully,” grabbed a bottle of wine and went to bed”.

He has no idea what happened to the dinner. He says people were used to his drinking after 30-years, and no one said anything. His family just carried on without him.

Christmas 2015, Patrick thinks he might cook a turkey again for his now adult daughter and son. He says they may bring some wine and have a drink, but he won’t. 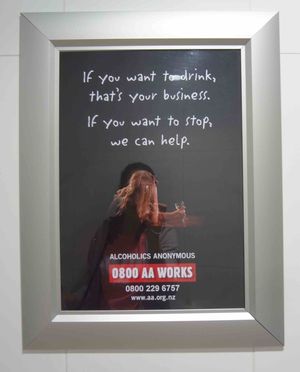 Mary is an alcoholic. She’s sober now, but she had her first drink when she was thirteen.

“I couldn’t wait to do it again. I used to choose my friends based on the contents of their parents liquor cabinet. If booze went missing, the friends got the blame, not me”.

Mary says because she’s tall she was able to go into night clubs by the time she was  fourteen , and could  buy alcohol at bottle stores too.At twenty one she was in Sydney working where she discovered heroin. That did away with the need for any alcohol.  Six years later she came home a bit the worse for wear.

“ I know what it’s like to realise that no one on this earth cares  whether you live or die, and probably would prefer it if you were dead. Any relationships that I had just got in  the way of how I wanted to drink.”

This Christmas Mary says she may join the pot luck party that AA throws each year. She might spend time with a friend who has a birthday on Christmas Day, or she may  stay at home and cook some of the fresh vegetables she’s got growing in her “paradise by the sea” garden.

Is life easy for Mary now?

“Yeh, very easy" she grins." I don’t have  to sniff every pile of dog shit to know that it stinks”.