Fish have personalities. And while scientists stop short of describing them as introvert or extrovert they do use words such as ‘bold’ and ‘shy’ to describe them. 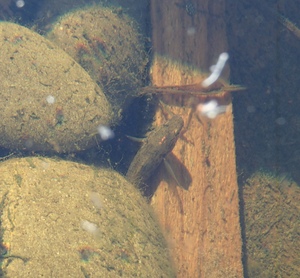 Common bullies have different personalities that shape how they interact with their environment and with other fish. Photo: RNZ / Alison Ballance

And how do they work this out? With a personality test, of course.

“You’ll get individuals that are quite shy and will retreat away from any sort of threat. You’ll get individuals that are much bolder and will go and investigate if you give them a simulated predator cue. They swim up and take a look,” says Travis Ingram, a freshwater biologist at the University of Otago, who has been working with a native fish called the common bully, or cockabully.

“Some will swim in and explore a new space straight away, while others will hold back.”

“Some will be much more aggressive if you put up a mirror, and they see what they think is another bully that they can start fighting.” 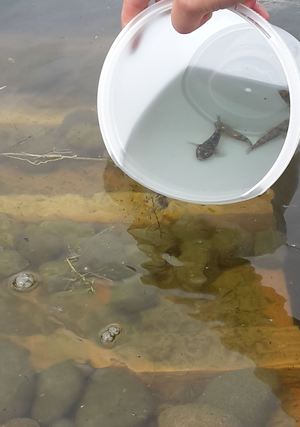 Travis says the different personality traits are often correlated, for example bold and aggressive fish that are also quite exploratory, and it is this suite of characteristics that they call a fish’s personality.

Scientists want to know this because understanding individual fish and their behaviour helps them understand food webs.  A fish’s personality can determine their preferred food, use of space and interactions with other species.

The food webs that Travis and his students are interested in are ponds and small lakes.

Their fish of choice, the common bully, is socially a loner and, as its name suggests, is quite common. To help unravel the complexity of the bully’s food web they have been running a series of experiments. 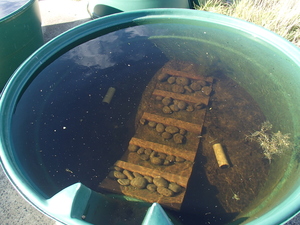 An experimental pond that is home to four common bullies offers them different places to hide, such as amongst rocks or in plastic pipes. Photo: RNZ / Alison Ballance

These mesocosms are large enough to each house four common bullies, and they contain some rocks and bits of wood for the fish to hide in, along with some pond weed, bottom sediment and a thriving ecosystem of small zooplankton such as Daphnia, as well as pond snails. These are all foods that common bullies love, and the fish that have already been personality tested in the lab are now having their diet assessed.

Travis says they want to know whether all the fish eat the same amount of the same food, or whether, their diet is as variable as their personality.

Another area of interest is how the bullies behave in the presence of introduced Eurasian perch. The perch could be having different effects when they are small compared to when they are large, as small fish compete for food while larger perch eat the bullies.

Introduced fish such as trout have had a major impact on native fish populations, and the research by Travis and his group is helping unravel the details of exactly how this happens. 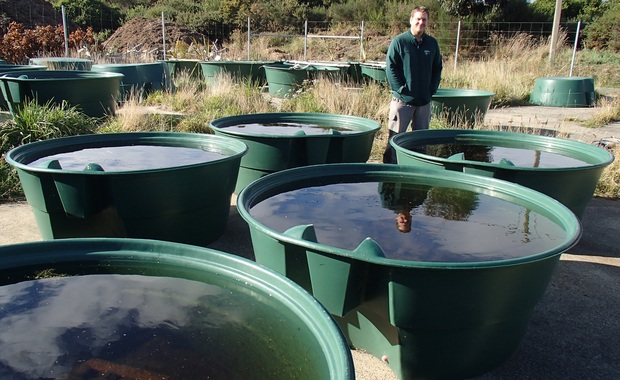