Similar studies have been done looking at New York City, which is incredibly diverse, but we probably have some of the rarer lineages you wouldn’t find in New York City.
Lisa Matisoo-Smith, Africa to Aotearoa project

Without the Babiches, Sundes, Nobilos and many other Dalmatian families, New Zealand may never have become renowned as a fruit-growing and wine-producing country.

But back in the 1860s, when the first Dalmatians arrived in New Zealand to dig first for gold in the South Island and then for kauri gum in Northland, before eventually establishing the first vineyards, they brought much more than their skills in viticulture.

They added to New Zealand’s diversity, and their DNA sequences are now contributing to the Africa to Aotearoa project, the first survey of the genetic diversity of New Zealand’s current population, which traces ancient migration histories right back to when people first walked out of Africa. 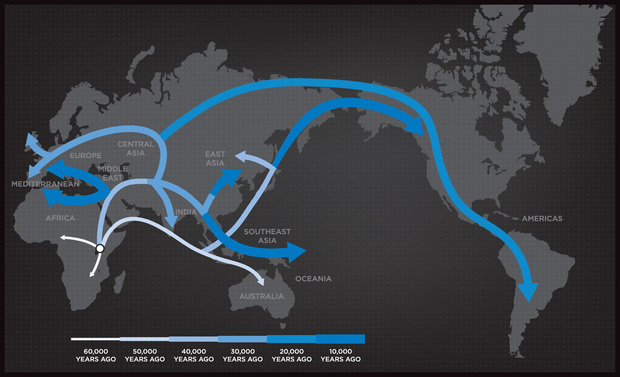 This map shows the migration routes out of Africa. New Zealand was the last major landmass to be settled as part of the migration that fanned out across the Pacific. Photo: Genographic Project

This expansion out of Africa began some 60,000 years ago. New Zealand was the last destination on this great human journey - the last landmass to be settled only about 750 years ago.

Auckland’s Dalmatian community is one of several ethnic groups that have contributed their DNA to the project, led by University of Otago biological anthropologist Lisa Matisoo-Smith.

The project draws on the analysis of genetic markers from around 2000 New Zealanders to reveal their migration histories. Most people were sampled randomly in all major cities, but Matisoo-Smith says she also wanted to unravel the migration stories from the various communities that have come to New Zealand as groups of people with a shared culture. 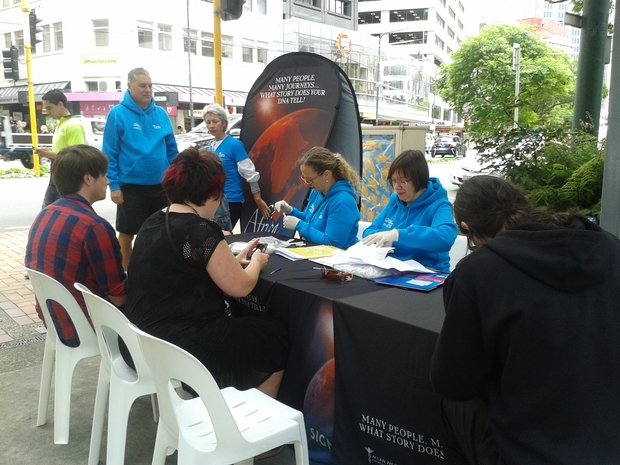 Apart from Auckland’s Dalmatians, other groups include the Lebanese community in Dunedin and the Chinese community which arrived in Central Otago during the Gold Rush.

She says such groups are interesting because they usually maintain links to their culture and language, and often originate from a small region, or even a particular village.

“What is interesting about the Dalmatian community is that, unlike the other communities that we’ve sampled, there seems to be a more broad representation of the genetic diversity in the [home] country than we see, for example, in the Lebanese community.”

While the Lebanese and Central Otago Chinese each represent essentially one village or a specific region, the Dalmatians include people from all parts of what is now known as Croatia.

The full mix of lineages is fairly similar to the proportions that we see in Croatia today.

This includes a very rare lineage that is only found on one of Croatia’s off-shore islands, Hvar. “It’s an Asian lineage and papers have been written about the fact that it’s been found in this European population in Croatia. It also turned up in the Auckland Dalmatian community, in one person whose family lineage takes him back to the island.”

Croatia has many small islands, which are often of interest to geneticists because “of the assumption that islands are genetic isolates”.

For example, one island in Micronesia has become known as the island of the colour blind, because one of the founding people had the condition. “But if you think about the Mediterranean, these are people of the sea … so while they may be more isolated than mainland populations, they are not really completely isolated.”

One surprise to emerge from the DNA analysis of the Dalmatian community in Auckland is the lack of Maori lineages. “Given the history of the gum diggers, particularly in the far north, I expected that there would be more Maori mitochondrial lineages in the broader Dalmatian community. It may just be the structure of the Auckland community as opposed to a Northland community, but we didn’t find any Maori haplotypes.”

The main result of the Africa to Aotearoa project, however, is that New Zealand may be genetically more diverse than some of the world’s largest cultural melting pots. With the exception of a few rarer genetic lineages, Lisa Matisoo-Smith says all major branches that exist in the world are represented in New Zealand.

Similar studies have been done looking at New York City, which is incredibly diverse, but we probably have some of the rarer lineages you wouldn’t find in New York City. It’s a pretty cool result for this country that has such a short human history. It says something about the diversity of New Zealanders and what it means to be a New Zealander.