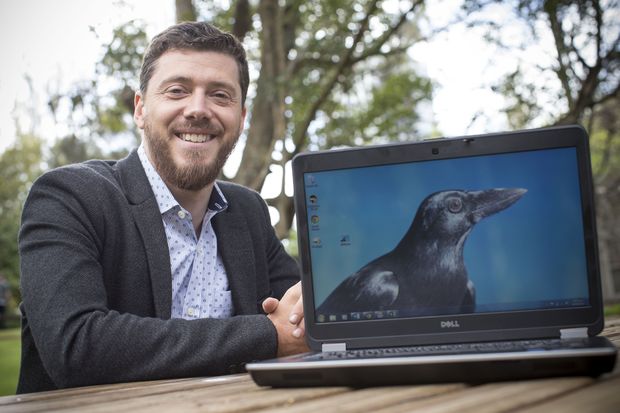 Working with animals and children is usually a sure recipe for chaos, but for University of Auckland cognitive biologist Alex Taylor it has led to the $200,000 Prime Minister’s MacDiarmid Emerging Scientist Prize.

The 32-year-old is fascinated with one of the greatest mysteries in biology and psychology – the evolution of intelligence. His focus is on trying to understand how humans think differently from the rest of the animal kingdom by studying the cognitive and problem-solving abilities of birds, particularly New Caledonian crows and kea.

Birds are separated from us by millions of years of evolution, but Dr Taylor says that evolutionary distance provides a great way of uncovering what kind of processes have developed, and whether evolution has “carved their minds in the same way as ours to get the same thought processes”.

“We are beginning to realise that birds are feathered apes, rather than being birdbrains.”

Dr Taylor works with New Caledonian crows because they are known for their skill in using and making tools, something usually associated only with humans and apes.

"It’s amazing to see this level of technology in a bird species. This obviously begs the question of what’s going through their mind that allows them to create these behaviours.”

To study just how smart the birds are, he gives them problems to solve and analyses how they tackle the task. Recently, he has also started working with young children to compare their cognitive skills and learning to those processes in the birds.

Essentially we are going to be giving children and crows identical tasks and we’re looking to see what the children do well at, what the crows do well at, do they make the same kinds of mistakes. That’s going to allow us to look for similarities.

As part of the project, he is also working with adults and expects that the results may knock us off our perceived evolutionary perch.

“Humans like to think of themselves as being the top of the tree and very smart, but when it comes to a lot of problems involving causality we actually tend to do really poorly.”

He says chimpanzees, for example, can remember up to 16 numbers that are flashed at them in the right order. “Their working memory is much better than ours.”

One of the challenges for cognitive biologists is to figure out whether intelligence evolved in a linear progression or whether it is a more modular process across the animal kingdom, with some species, including us, developing certain smarts.

If we can map out how the crows are thinking, it might give us an understanding of how we were thinking two million years ago. You can’t rerun history. We have amazing artifacts, including hand axes and bone tools, but we don’t have any idea of how our ancestors were thinking.

He says there is an open debate in the research community between people who prefer to think of different kinds of intelligence, for example social or technical intelligence, and those who favour the notion of a general mechanism behind smart behaviour.

“It’s the idea that species that live in large groups - ourselves, chimps, hyenas for example - they should have quite sophisticated social intelligence for dealing with each other, thinking about what each other is thinking, cooperating with each other. But there is this idea also that there are the more technical problems that requite you to be smart.”

The challenges of getting food from places that are hard to access, of navigating efficiently and making good foraging decisions all exert selective pressures that could lead to the evolution of intelligence, he says.

The research results so far suggest that there are many different types of intelligence.

“We’ve seen the crows solve some problems and fail at others. It’s not the case that they are just generally smart. What we seem to be seeing is that they are particularly smart with particular types of problems. When it comes to social problems, cooperating and maybe a sense of fairness, the crows don’t have these kinds of social smarts.”

Dr Taylor says he will put his prize money towards testing the cognitive skills of one of our smartest birds, the kea.