AUT University in Auckland recently hosted a public symposium on wearable technologies and smart textiles.  The focus was on nano-fibre applications, responsive textiles and integrated electronics that can be worn on the body as garments. Run by their Textile and Design Lab, the programme included presenters from around the world as well as local researchers and students.

The prototype haptic glove is the size of a pack of cards and sits on the back of a specially modified glove. Jacques Foottit (in checked shirt), a creative technologies student at AUT, talks with a gamer who is about to try the glove and the flight simulator. Photo: RNZ / Justin Gregory

Jacques Foottit studies creative technologies at AUT. He spent his Honours year developing a Haptic Feedback Glove designed to respond to the user’s sense of touch and movement. While he eventually hopes to develop it into a therapeutic tool for physiotherapists, at the prototype stage he’s using it with a flight simulator to demonstrate the possibilities and to invite public response. 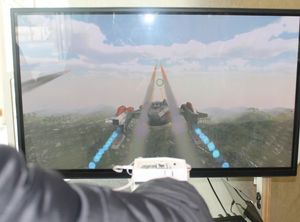 A gamer holds the haptic feedback glove up as he controls the plane in the flight simulator. Photo: RNZ / Justin Gregory

"I thought 'what if we could create this childhood experience where you imagine your hand as a plane but instead of it as pure imagination, you’re seeing it come to life in the computer'”.

Jacques says the project began out of a general interest in how humans interact with computers and in particular, how virtual reality technology might develop in response. It was a short step from there to thinking about developing a glove that might allow users to enter and more naturally interact with a virtual world.

The Haptic Feedback Glove on display at the symposium looks like a white, knitted glove with a printed circuit board the size and weight of a large deck of cards on the back of the hand. Initial Measurement Units are stitched into the digits of the glove to respond to finger flexing and may one day allow a therapist to capture motion information from the hand’s movements. 3D printing allows a glove to potentially be made as a custom fit for its user.

Once turned on, the glove provides an interface with flight simulator software. On screen, a futuristic aircraft flies over a landscape, encountering other, hostile aircraft as it does so. Moving the arm forward and back controls the aircraft’s velocity while the orientation of the hand directs the movement. By tucking the thumb under the palm of the hand the user can fire missiles while a slight movement of the fingers operates the guns.

This glove is the second Jacques has built. The prototype, which was developed using existing, repurposed technologies, was frequently taken out of the design lab and shown to the public to both expose its limitations and to obtain feedback on how it might be improved.

"Interestingly, one of the major things people like about (the glove) is the haptic feedback. A lot of the technology I’ve seen out there does everything I’ve done but without haptic feedback. So to hear people say 'it was good and then it started vibrating' was really great…really encouraging." 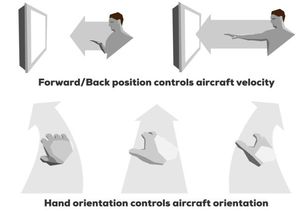 The limitations identified included functionality as well as user comfort. The second version is lighter and more robust as well as wireless and battery-powered. The portability of the glove means it can be used with mobile devices, potentially allowing a patient to exercise and receive feedback on their progress in their own home or at their place of work.

For the next stage of his study, Jacques plans to refine the glove further, working closely with physiotherapists to find a specific application for the glove that relates to hand rehabilitation.

‘The conversation we’ve had so far is around the potential for it being used…to help the patient to do the exercises in a more encouraging manner.  Whether that be having a game which they can play so it’s more fun or some other way I’m not sure.’

"The main step is actually getting the technology into the physiotherapist’s hands so they can see it and go 'Oh I have an idea about how this could be useful for my patient'."