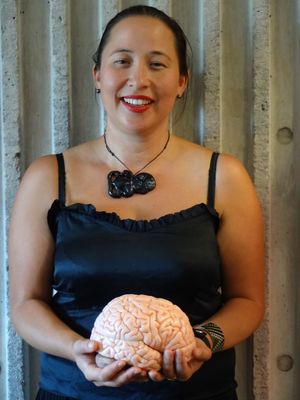 Our brain has a remarkable ability to rewire itself constantly, even following injury.

Melanie Cheung, a neuroscientist at the University of Auckland’s Centre for Brain Research, hopes to harness this plasticity to slow the progression of neuro-degenerative conditions such as Huntington’s disease.

Huntington’s is an inherited genetic disorder that causes the progressive breakdown of nerve cells in the brain. Its symptoms include deterioration of movement, personality and thinking. There is no cure, and no effective treatment.

Although the prevalence of Huntington’s disease among Māori has not been formally quantified, there is evidence that it is at least twice that of non-Māori. Melanie Cheung has recently received nearly $1.2 million from the Health Research Council to develop computer-based brain training programmes with a strong focus on te reo and tikanga Māori.

Her team has been working with several whanau affected by Huntington’s who have now become part of a study to assess whether brain resilience training can help to delay the onset of symptoms and to slow the course of the disease.

“My idea was based on the fact that in Huntington’s there is an increase in neurogenesis (the production of new brain cells) but it’s too little too late. So perhaps neuroplasticity could help recruit these cells, help them integrate functionally and enhance that process.”

One of the molecules that plays an important role in neuroplasticity is called Brain-Derived Neutrotrophic Factor, or BDNF, and it is significantly reduced in Huntington’s. But other researchers who have used brain training with schizophrenics have shown that BDNF increased when people started using the programmes. The hope is that this will also be the case in Huntington’s.

As part of her commitment to tikanga Māori, she consulted her own whanau and iwi when she began work on brain tissue.

She became particularly interested in neuroplasticity after working with pioneering American neuroscientist Michael Merzenich, who has been part of the development of the Māori-focused brain training programmes.

The first study began earlier this year, when all participants were assessed for their baseline cognitive and sensory function, psychological conditions such as depression and anxiety, and the research team took an MRI scan of their brain.

Each study member will go through the same suite of measurements after 20, 40 and 80 weeks of daily brain training, focusing on tasks such as emotional recognition, temporal processing, speed of processing, working memory and attention.

“These are all things that get changed early in the disease process. These cognitive changes then lead to other issues further down the track.”

The study focuses on people who don’t yet experience any symptoms, and may not even know whether they have inherited the gene that leads to Huntington’s. If the results are promising, Melanie Cheung hopes that brain training will be recommended to anybody who has any history of Huntington’s in their family.