Places like Orokonui Ecosanctuary are just a beacon of hope – for humanity and for biodiversity. It’s the next best thing to an offshore island, but we’re only 15 kilometres from central Dunedin, so it makes wildlife more accessible to the general public.
Orokonui Ecosanctuary conservation manager Elton Smith 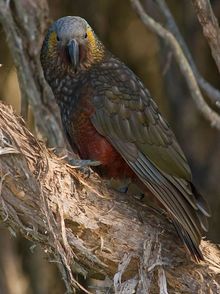 The kaka population at Orokonui Ecosanctuary began with a few captive-reared birds, and now includes wild bred birds, such as this one, which was the sanctuary's first wild kaka chick. Photo: Bruce Cathro

“The original idea was to set up a large aviary, because people were concerned about the imminent demise of rare bird species in New Zealand,” says Orokonui Ecosanctuary general manager Chris Baillie. “And that idea changed over time to create a whole functioning ecosystem for all the species, right through plants, invertebrates, birds and reptiles.”

The tuatara and saddlebacks are just two of the eight species that have been reintroduced so far in an effort to recreate a fully functioning forest ecosystem, that also includes a wetland and open grassy areas for the resident takahe.

“The goal is to recreate a piece of coastal Otago forest to what it was, as near as possible, before humans arrived. And clearly we can’t release the [extinct] moa – but maybe we can release some emu or ostrich,” says Elton, laughingly, “There’s some missing components that we’ll never get back, but there are many components that we can – and have – brought back. 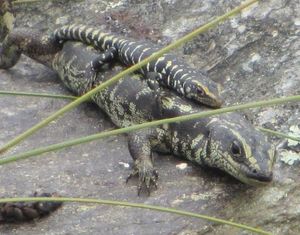 Otago skinks are New Zealand's largest skink. The small population at Orokonui have bred for the first time, and volunteer Alister Robinson snapped a neonate basking on top of an adult. Photo: Alister Robinson / Orokonui Ecosanctuary

Chris describes the fence as the ‘cornerstone’ of the project; “it’s like a friend” says conservation manager Elton Smith. The fence encloses 307 hectares, from which all introduced predators and herbivores have been removed. The mammals included rats, mice, possums, hares, feral goats and possums, and were removed through a combination of hunting, aerial application of the toxin brodifacoum and trapping to remove the last remaining animals.

But even a predator-proof fence has its limitations. Animals can – and sometimes do – get past the fence into the sanctuary. Usually it’s a rat or a mouse, but earlier this year two stoats managed to get inside the sanctuary. The young female and an adult male were caught two weeks apart in the same trap, and although Elton never managed to find the place they got in, he is happy that they were promptly caught, and subsequent checking with a trained predator dog has failed to find any sign of further animals.

“The nasty C word around here is complacency,” says Elton. “You’ve just got to keep being vigilant. And you can never stop being vigilant, because if we walked away from this fence for six months we’d be back at square one. The place would be over-run with predators.” 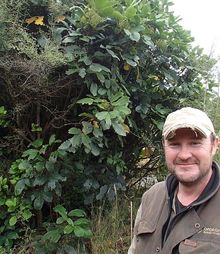 Orokonui Ecosanctuary employs a small number of staff, but relies on its volunteers, who collectively put in more than 12,000 hours of work each year, valued at about a quarter of a million dollars. They also employ an educator and work with local schools, and the students who visit the sanctuary on a school trip are encouraged to share their experience with their family and bring them back for a visit.

Kaka were the first native species to be reintroduced to the sanctuary. A small breeding population of the rare kiwi the Haast tokeaka has been established, and the sanctuary has just become a crèche facility for young Haast tokeka, after their hatching in captivity, until they are large enough to be considered ‘stoat-proof’ and can be released back in the wild.

Tuatara have successfully bred for the first time on the mainland South Island for more than a hundred years, with the first young tuatara hatching earlier this year after a longer than usual incubation, lasting two winters, due to the cooler temperatures experienced in Otago. The tuatara at Orokonui have featured in a previous Our Changing World story.

South Island robins and South Island saddlebacks have both been successfully established in the sanctuary, following the advice and leadership of the late Ian Jamieson, an expert in conservation genetics at the University of Otago. 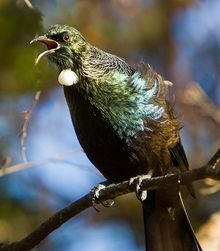 Tui are among the birds that were already resident in the forest at Orokonui, and they're thriving since the predator-proof fence was erected and introduced mammals such as rats and stoats removed. Photo: Dave Curtis / Orokonui Ecosanctuary

Elton is excited that visitors to the sanctuary are finally able to encounter the robins “They’ve finally moved up to the public walking tracks. It’s taken five years but finally people are able to see the robins – because they’ve always been down in the very north block, where there are no public tracks.”

Even though coastal Otago is outside their usual geographic range a small population of New Zealand’s largest lizard, the Otago skink, resides in a small enclosure near the visitor centre, where a stack of schist rocks has been placed to create the thermal environment filled with hiding places that the lizards require. There are also plans to establish a breeding population of another rare large skink, the grand skink.

“I’ve had the privilege to be here since day one”, says Elton. “And it’s been quite amazing. And the thousands – tens of thousands – of hours of hard work that staff and volunteers have put into this project. A lot of hard work. But it’s all been worth it.”

Volunteers at Orokonui Sanctuary are surveying the forest for geckos and skinks using Artificial Cover Objects made from onduline (left) and rubber (centre) which lizards will hide under. The Otago skink (right) lives in a small enclosure in the sanctuary. Photo: Alister Robinson & Karin Ludwig / Orokonui Ecosanctuary