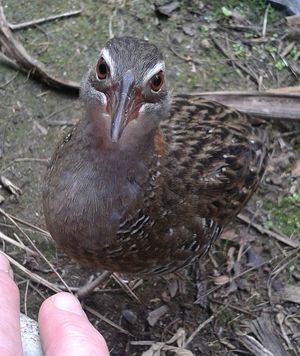 Banded rail chicks, such as this recent fledgling, are commonly given to Great Barrier Island's bird rescue lady Karen Walker to care for as they are easily separated from their parents. Photo: RNZ / Alison Ballance

Looking after baby birds is not for the faint-hearted. Baby banded rails, for instance, need to be fed every 15 minutes for the first few days. But it’s a chore that Karen Walker happily undertakes, knowing that by the time the chicks are six weeks old they’ll be able to be released into the wild.

Karen is the ‘bird rescue lady’ of Great Barrier Island, and the small island community knows to take any sick, injured or orphaned birds to her for care and rehabilitation. As well as banded rail chicks she regularly looks after pateke, black petrel and tui. So how did Karen fall into this role?

“It was just a desire to do something” says Karen. “Seeing the incredible variety of birds we have here, the native birds, and seeing that they are struggling at times. And I feel it’s really important to do whatever you can. [Humans] have brought cats, dogs, and rats, too, and it’s trying to offset that damage with some help in any way I can – and looking after the sick and injured ones, or helping raise little ones, as well as what I’m doing here with the habitat planting.’

Karen and her partner Ken live on a lifestyle block in Tryphena harbour in the south of Great Barrier Island. What began as bare paddock has now been liberally planted, with flaxes and cabbage trees thriving in a wetland area, with fruiting forest species such as puriri planted around the edge. While the initial plantings were done to provide habitat for pateke, the threatened brown teal, Karen realised that planting fruiting trees would benefit other bird species such as kaka and tui. There is still an area of mown grass, where the thriving pateke population feed at night. Karen also uses rat bait to control the property’s rodent population, and has put her two dogs through bird aversion training and keeps them shut in at night to be sure they won’t be a risk for the birds.

While Karen is the one who puts in long hours caring for the birds, she says that the Great Barrier Island community is very supportive of her. Judy Gilbert from the Windy Hill sanctuary has provided funding for an aviary, and supplies Karen with mealworms as food for hungry rail chicks. The Fly My Skies airline transport birds to and from the mainland if they need veterinary care, while a local car rental company delivers birds that need care and also drops off birds that are to be released in either Windy Hill and Glenfern sanctuaries.