“We discovered that nest boxes made the little penguins feel better. More comfortable, more secure. And they took to them quite easily. In the study area, which is 170 nests, 158 of those are in boxes, and only 12 are natural nests.” - Little penguin volunteer researcher Mike Rumble on Matiu-Somes Island. 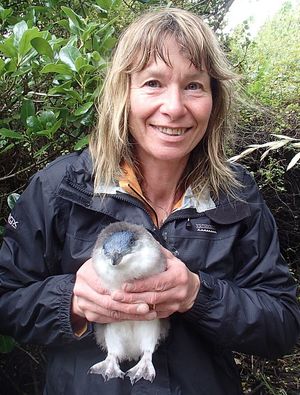 Ali Hull holds a juvenile little penguin which has just begun to produce its first adult feathers, on the top of its head. Photo: RNZ / Alison Ballance

In 2007, ornithologist Reg Cotter and seabird expert Graeme Taylor, from the Department of Conservation, began a small study of little penguins – or little blue penguins, as they are often known – on Matiu Somes Island, in Wellington Harbour.

They were investigating the possible effects of flipper bands on the health and breeding success of little penguins, as research on other penguin species was suggesting that drag from the flipper bands was an issue. To make the work easier the team of volunteers, which included Mike Rumble and Ros Batchelor, began to put out nest boxes for the penguins to use. These provided a secure, dry nest site, with a long tunnel that prevented predatory black-backed gulls reaching the chicks, and with an opening lid it was easy for researchers to get birds in and out for weighting, measuring and marking. The boxes also provided an ideal site for the penguins to moult – they undergo a catastrophic moult, losing all their feathers in January and February, and they require a dark quiet spot for a few weeks while their new feathers grow.

Stage one of the little penguin study showed that flipper bands were not having any negative impact on the birds on Matiu Somes. During stage two, the team added to the number of nest boxes on the island – there are now more than 350 – and continued to band birds, using tiny web tags that are attached to the web on one foot. The study has now come to an end, but the team believe it would make a great site for future research, as the birds and the nest boxes are all marked, and their breeding histories are well-known. 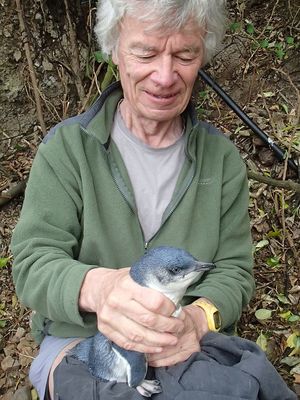 The study has shown that the population of little penguins on predator-free Matiu Somes Island is thriving, with about 1.5 chicks produced per nest box per year; more than 90% of those fledge successfully. The population is growing – the team found 360 birds in the first year of their study in 2007, and by 2011 this had increased to 590 birds.

Research on the foraging behaviour of Matiu Somes Island’s little penguins by University of Auckland student JingJing Zhao produced some interesting results. She attached GPS locators to eight birds. Those from the eastern side of the island foraged along the Eastbourne coast, while those from the west foraged alongside the Hutt Road and in Evans bay. Several birds swam out of the harbour to forage near the mouth of the Wainuiomata and Orongorongo rivers. Ros Batchelor noted that those that had the furthest to swim left the earliest, and returned the latest, while those with a short foraging commute tended to sleep in.

“They’re very, very good swimmers,” says Ros.” We’ve had a very limited number of recoveries of birds we’ve marked on this island, and one was found in Hawke’s Bay and one was found in the Marlborough Sounds. The shape of their body is like a torpedo, and their flippers – which are really strong – just propel them through the water.”

Alison Ballance recorded a story in 2010 with Reg Cotter and Graeme Taylor about the early days of the little penguin study on Matiu Somes Island.

Little penguins on Matiu Somes Island have been banded with tiny web tags, on their feet. More than 300 nest boxes have been placed around the island and are well used. Photo: RNZ / Alison Ballance

Listen to the story about little penguins on Matiu-Somes Island or download a podcast below: