Marine geologists have discovered a new active fault in Wellington Harbour, but say it is unlikely to increase the capital city’s known risk of earthquake damage. 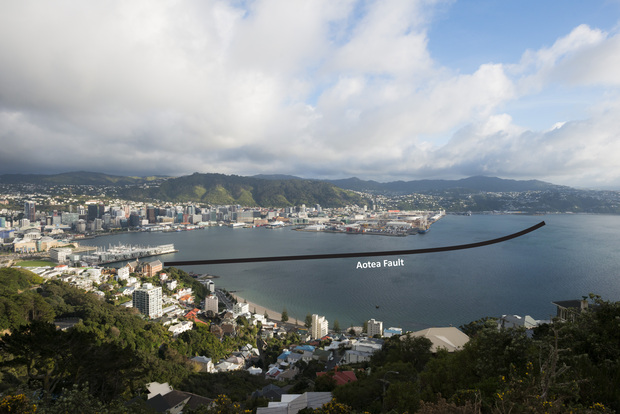 The Aotea fault, named for its proximity to Aotea Quay, was found by National Institute of Water and Atmospheric Research (NIWA) marine geologists mapping the area between the Cook Strait Ferry terminal and Point Jerningham as part of the It’s Our Fault programme led by GNS Science.

A combination of seismic surveys and borehole drilling over the past two years has enabled the team to pinpoint the path and extent of the new fault, which is hidden from view beneath the seafloor.

The fault is thought to be capable of moderate to large earthquakes in the order of magnitude M6.3 to M7.1. It has not yet been identified on land but Philip Barnes and Scott Nodder say it may extend to the south coast of Wellington and beyond into Cook Strait. They believe at least two significant earthquakes have occurred on the fault in the last 10,000 years.

The Aotea Fault is part of a series of several dozen geological faults in the Wellington region, many of which are considered capable of generating a strong earthquake.

The NIWA team says finding this fault was perhaps not a big surprise as it fits into the overall pattern of faulting in the Wellington region, but it demonstrates why ongoing fault studies are important. Scott Nodder says the focus now is working out its exact location and ground rupture size so this can be incorporated into land use and engineering strategies to mitigate this hazard.

In the meantime, research continues on the Evans Bay Fault, which is a possibly active fault north of Rongotai in central Evans Bay, first identified over three decades ago.