Looking Into the Eyes for Alzheimer's Disease

Signs like forgetfulness or mild confusion are often the first indication that a person has Alzheimer’s disease.

However, could the senses – including vision – be affected by Alzheimer’s disease before memory?

Lily Chang, a PhD student at the Department of Optometry and Vision Science at the University of Auckland, is looking into it.

“We’re hoping that by picking up subtle problems in the eyes it’s going to help us diagnose Alzheimer’s disease earlier or even predicting people’s risks at getting Alzheimer’s disease in the future,” says Lily, who is the recipient of a Hope-Selwyn Foundation Scholarship.

Anecdotally she’s personally seen a couple of Alzheimer’s patients with problems with their vision. 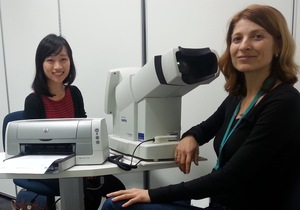 “Funny enough, a lot of patients with neurological conditions, not only Alzheimer’s disease patients but also people with Parkinson’s disease, they often go to the optometrist complaining of visual symptoms,” says Lily, “Whether it’s difficulty with reading, or not being able to perceive contrast as well, it’s quite interesting.”

Lily is conducting a battery of eye tests on three different groups, a young control group, without any neurological conditions, an elderly control group, and a group of patients with Alzheimer’s disease.

“So the tissues are sectioned and we combine it with the antibodies we’re interested in, and that tells us whether there’s any pathological markers for Alzheimer’s disease in the retina,” says Lily.

In particular, she’s looking for amyloid beta proteins as well as phosphorylated tau, molecules which form plaques in Alzheimer’s disease that block the communication between neurons.

“That’s the beauty of the project,” she says. “It’s looking at both tissues on a microscopic slide as well as seeing actual patients with visual function problems so that we’re able to diagnose a problem when the eyes are still attached to the patient and when the patient is still able to respond to the stimuli we use in the tests."

Lily is also looking at proteins in retinas from a South American animal called the Octodon degus which naturally develops Alzheimer’s disease, while other collaborating groups are looking at the brain of these animals.

Lily is not just looking at the proteins though, she tells Ruth Beran. She’s also looking at inflammation, oxidative stress, and death of the retinal cells.

“There’s discussion on why we still haven’t found a cure for Alzheimer’s disease,” says Lily, “One of the reasons is because the disease is often diagnosed when it’s very advanced. So perhaps the brain just doesn’t have enough reserve to bounce back anymore.”

“Now by diagnosing early and potentially using those pharmaceuticals earlier, it may have a more successful outcome than current clinical trials,” she says.