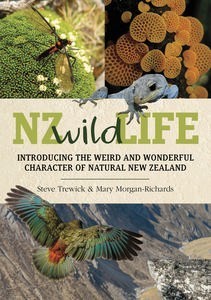 The book features 10 chapters, each of which centre around a single species. These species provide the tent pole around which the authors weave themes about ecosystem function, for example, or evolution. The chapter headings include two birds, four plants, two invertebrates, as well as reptiles and koura or freshwater crayfish.

“It’s definitely eclectic, but we set out not to try and write about everything because there’s just too much diversity and too much complexity,” says Steve.

“We chose just 11 or 12 main groups of plants or animals so that we could give some detail about their biology, their life history, and maybe their evolution, but also use each group to help illustrate some general principles about biology and the way biodiversity works.”

Both authors teach in the Institute of Agriculture and Environment at Massey University, and the book is based on species and research topics that the pair work on together, and on which they lecture.

Mary Morgan-Richards in the containment facility where New Zealand stick insects imported from the Scilly Isles are being hatched and raised in captivity. Photo: RNZ / Alison Ballance

One of the features of this book is the use of research data, both published and unpublished.

“We actually present some data that we haven’t published anywhere else,” says Steve, “showing how tui eating the fruit of fuchsia trees enhances the germination of the seeds of tree fuchsia. So we use, in that case, just a simple graph … and we do that quite a lot in the book. We have some simple graphs, diagrams or maps, showing distribution patterns or processes, or actually expressing some data, and that is usually something that is absent in popular biology books.”

Steve Trewick has appeared on Our Changing World previously talking about tree weta diet, and you can also hear Mary Morgan-Richards talking more about stick insects in an earlier story.