When Pen Holland mentioned to colleagues at Landcare Research that altering various parameters on the ecological model she uses to look at the impacts of possum browse on forest health was like playing a game, it got her thinking. Could she actually use the data in her model to create an online game that would also give an insight into how users made decisions about forest monitoring and pest management? 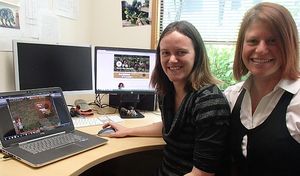 The key to creating the game was the involvement of PhD student Hazel Bradshaw from the HIT Lab at the University of Otago. Hazel is a games developer who is interested in creating games that are both satisfying to play, yet educational.

“I take complex problems, such as Pen has with the possums, and put those into a gaming environment, which allows people to engage with complex problems in science in a way that’s actually quite natural to them,” says Hazel.

“The key is getting the concepts across, what’s going on with the science and in the real world, but making it fun so that people actually want to play it,” says Pen. “And they’ll play it long enough to pick up the educational aspects, hopefully without noticing!”

Four years down the track the pair have created a small mobile phone or tablet-based game called Possum Stomp, and they are about to release the first stage of a much larger online game called Ora – Save the Forest.

The Great Kiwi Possum Stomp game (left) is designed to be played on smart phones or tablets, and was developed as a 'reward' for the much more complex Ora - Save the Forest online game (right) Photo: Landcare Research

Possum Stomp features Stompy the Kiwi who is trying to stamp out zombie possums – representing invasive pest species - that are stealing the player’s kiwi eggs, which Pen says “represent the native biodiversity of New Zealand.” Designed as a ‘treat’ within the larger game Ora, this Space Invaders-inspired game includes some basis pest management principles.

Hazel told Alison Ballance that tests done to date with university students show that gamers quickly learnt the ecological principles underpinning the games, and that those who played the game had a very good recall of information four weeks later.

“So it’s something about the game and the game play,” says Hazel. “It’s about engaging with Liana [the scientist guide] or the forest, or getting the story. Or perhaps having the motivation to save your egg or clear the forest of possums is actually helping people retain the knowledge.” 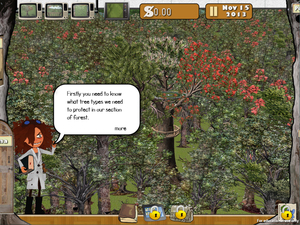 Liana the scientist is the guide to the game Ora, which is based on real-life data from ecological modelling of possum impacts on native forest Photo: Landcare Research

The Ora – Save the Forest game is built on Pen’s real-life ecology model, and feeds back into it. Pen says the game “is about learning that managing an ecosystem is complex, it’s difficult, and that ultimately it is bound to involve some compromise.”

Possum Stomp is available for both iPhones and Android phones, and has been named one of the world's Top 10 science-based games by the Guardian newspaper.

Our Changing World has produced a number of stories around the theme Pest-Free, which are relevant to the pest management themes within these games.

'Possum Stomp' and 'Ora - Save the Forest' Audio