Every year, around one hundred people drown in New Zealand waters. But it doesn’t have to be that way according to Nick Mulcahy, who's been a lifeguard in NZ and Australia since he was 14. He’s just been honoured by Risk NZ for his role in conducting substantial risk assessments of beaches throughout NZ. As Risk Manager for Surf Life Saving NZ, he’s produced innovative strategies which are being implemented throughout the country for analysing, evaluating and treating risk at beaches. Amelia Nurse joins him at Titahi Bay to talk about what those strategies involve, how they apply in real life, and how they can help save lives. 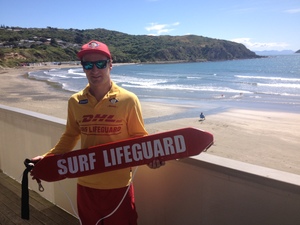 Are you up on Beach Safety? Take this quiz (answers at bottom)

1. What is the safest type of wave for swimmers:

3. Which of these are signs of a rip:

4. If you get caught in a rip you should:

5. Which of the following attire is safe for ocean swimming:

6. If you are at the beach with small children you should:

7. Most drownings in New Zealand are caused by:

"There are 3 main components to a rip current, which include the FEEDER(S), the NECK and the HEAD. As waves approach, they will break along the sandbars (shaded light blue) then finally impact the beach (shaded brown). After contacting the beach zone the water becomes trapped by the sandbars, thus finds the path of least resistance, accelerated by gravity back to the ocean. This path is usually a break between two sandbars, as shown in the diagram. The current becomes focused between the sandbars, thus increases in speed seaward. Eventually the seaward component of the rip will lose speed and disperse in the head area." (National Weather Service, Wilmington, NC (NOAA))

According to drownbase.org.nz, as of 30 November this year, 84 people drowned in New Zealand. That’s up for from the same time last year. 69 of those were males, three were under 13, and 51 happened in rivers, beaches or tidal waters. Water Safety New Zealand reports that “Over the last 29 years a 60% reduction in drowning has occurred since a record high in 1985 of 214 and a record low of 87 in 2010.”

Water Safety New Zealand has a factual but chilling description of what actually happens when you drown. 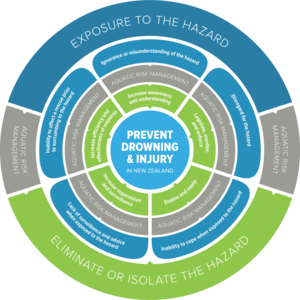 2. A) The gravitational force of the moon

Findabeach.co.nz is a great source for locating a beach and finding out about current conditions.