Music through a Christchurch lens

Taking advantage of the Canterbury landscape, Christchurch director Martin Sagadin has created stunning music videos for the likes of Marlon Williams, Girlboss, Ben Woods and Motte. He says 2018 has been a landmark year for music in the region. 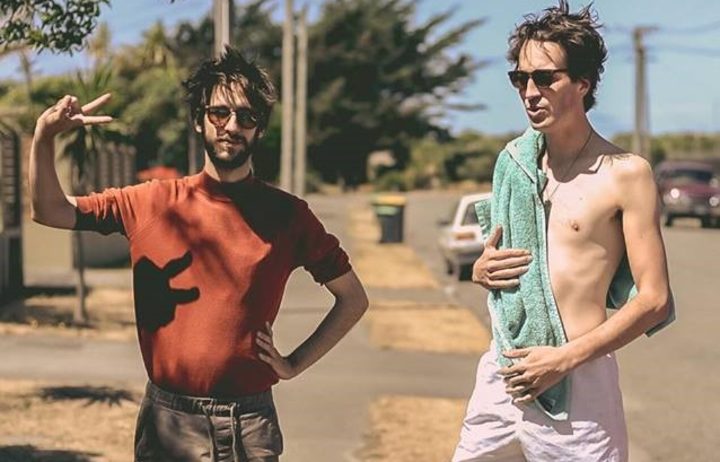 Christchurch-based filmmaker Martin Sagadin has made music videos for some of this country's most beloved musicians including Aldous Harding and Marlon Williams, as well some emerging musical talents.

Most of those videos were created in and around Christchurch, and 2018 has been a particularly prolific year.

Skip to the videos Martin created in and around Christchurch this year.

RNZ Music: As a Christchurch-based creative working closely with musicians, what’s your take on the city’s music scene right now?

Martin: The Christchurch music scene in 2018 seems to have really taken off. In my personal experience, this year has been defined by individual musicians branching off their established bands and going on to make incredibly polished solo projects.

One of the highlights this year has to be The Sickest Smashes compilation by the local label Melted Ice Cream. It’s a great release if you want to understand the shape of the Christchurch music scene in 2018.

There’s a diagram at the back of the booklet showing an elaborate family tree of 20 artists, related musicians and how they’re all interconnected. I think this connectedness is the key to the success of a lot of musicians in Christchurch.

Is there a particular type of musician that thrives in Christchurch?

Christchurch appears to me to be a place of origin for musicians just starting out, or a place of transition, for established musicians who come here to create.

Lower rent, general availability of rehearsal spaces, and a number of small venues mean that it’s a great place to try things out without a significant financial or professional cost. Out of this environment, some fantastic musicians have emerged with whole new bodies of work.

Once they’ve reached a certain level though, very few artists end up staying here. What’s interesting for me is that there’s constantly new things starting and springing out, seemingly from nothing.

What’s changed for musicians since the earthquake?

The earthquake happened on my first day of University, so I’m not really aware of the pre-earthquake music scene, but one thing that is fascinating is that a lot of incredible musicians were sort of stuck in Christchurch at that time. Aldous Harding, Marlon Williams, Delaney Davidson and many others were stuck together in a very uncertain limbo and I think a large amount of amazing music came out of that.

How are Christchurch audiences responding?

The Christchurch audiences are not particularly involved unfortunately. I think it’d be fair to say that the majority of audiences for the most important up-and-coming musicians are musicians themselves. Or like me, they’re involved in the scene in some other way.

I’d love to know what can be done to get more people to come to gigs in Christchurch. The artists I work with consistently mention getting a much better reception in other cities, which is a big reason a lot of them end up leaving - they want to be near those appreciative audiences.

Horn, Motte & Indi are all artists I’ve worked with this year who’ve since left for other cities. Inn saying that, people do return to make things here, to write, or get a break from a tour, and some people, like Alanna Eileen or Julia Jacklin specifically come here to record.

What are you looking forward to in 2019 for Christchurch music?

I’m most looking forward to new albums by Ben Woods, Motte & Pickle Darling. I’m also reliably told that Adam Hattaway and the Haunters have another album up their sleeves. And I really can’t wait to hear more from The Waltham Home Organ Society.

Check out the videos Martin created in and around Christchurch this year:

This video inspired by Andrzej Zulawski’s film Possession and grungy 90s music videos. Blasting that red light through the house created a really bizarre dreamy atmosphere on set and a lot of the stranger things in the video came from that delirium. Big thanks to Ben Woods, who cooked for us on this shoot.

This video took about two years to complete. This was one of those all-consuming projects and because there wasn’t a particular time limit, we could tinker away on it for a long time till we had it just perfect. We returned to the locations in different seasons to get a particular look, we crafted a handmade glass filter for it, we worked with the textile artist Hannah Heslop for the costumes. Julian Vares’ cinematography on this is just stunning. I am so glad this video finally saw the light of day this year.

This video was a mad rush. Organised in 2 days with a whole lot of people, this was one of the most fun projects I’ve worked on. Bizarrely, everything came together just right. I still think this song is one of the most perfect analogies for living in Christchurch.

One-take black & white video in a bathtub with a camera suspended above Richard while a light slowly and gently dances around him. Phew. We shot this at Richard’s house with a very small crew, but I am very happy with the result. Dave Covich, who built the jib arm that the camera was suspended from deserves a special mention here. Kirk Pflaum (who also shot ‘Stop Your Tears’ by Aldous Harding) was the cinematographer, his eye for lighting a simple scene was impeccable here.

This video was built by Julia Sharp. Her art direction shaped every part of this video, from the costumes (designed by Hannah Heslop again), to make-up and the set design. We worked on this video for a few months, compiling the set, building every part of it out of natural and artificial materials. The making of this video is pretty analogous to the creation of Indi’s first album. Incredibly high production values that were born out of Indi’s vision and the respect that other artists had for this vision. This one was definitely a labour of love.

This was an incredibly small production. I shot the video myself, with an old DSLR and through a plastic bag filter, which created the softness. I think Lucy’s love of red and pink really comes through here. As well as love for her pets the dog Bobby and the cat Moe. We shot a part of it in Christchurch and then the rest in Wellington. My good friend Adam-Luka Turjak edited it, which really transformed it into the final narrative.

There was a moment on this shoot where we realised that the tracks we had organised for the dolly were too short for what Marlon wanted to do on the beach. With 30 minutes to spare, the grip Dave Covich constructed an extra 5 metres of tracks and got them to the beach (which was fairly close to his house). It was definitely one of those moments that makes or breaks a video. The thing you can’t see in the video is just how much sand got everywhere.

Marlon Williams - ‘Come To Me’

This was such a nostalgic shoot. Old friends in old familiar places in the sun for a moment before heading on tour again. I’ve got incredibly blissful memories of this shoot. Julian Vares (who also shot What’s Chasing You) did a few slam dunks too in between takes. Gir, the dog was joy to work with too.