I Love You, Honeybear by Father John Misty 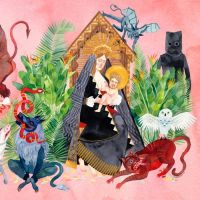 Under the solo sobriquet Father John Misty, former Fleet Foxes drummer Josh Tillman channels the psychedelic folk sounds of Laurel Canyon in its 60s/70s heyday. The Canyon is also the physical the setting for songs that parody the genre, while sharing confessional details of Tillman’s own life and loves. Is this smart, multi-instrumentalist, neo-hippie trying to have a bob each way?

Songs Featured: Strange Encounter, I Went To The Store One Day, I Love You Honeybear, Bored In The USA, Nothing Ever Happens At The Goddamn Thirsty Crow