Susie Ferguson: On surgery and endometriosis

When Susie Ferguson, one of the hosts of RNZ’s Morning Report, learned she would need a hysterectomy after a years-long battle with endometriosis, she wanted to be open about it.

As the time came to tell listeners that she would be away from work for the rest of the year while she heals from the surgery, Ms Ferguson quickly decided to treat it the same way she would if she was having any other operation.

Now, she wants to talk about her experiences with endometriosis.

"I think it's the kind of thing that doesn't help people if it exists in silence,” she said. “It seems to me it's more logical to just explain what's going on, and to some extent, demystify it."

Ms Ferguson said colleagues, particularly women, had been responsive and helpful when she told them what was happening. With one in 10 people who have a uterus reportedly battling endometriosis, she said this was not surprising.

“After you start telling some friends and colleagues that this is going to happen, you discover that suddenly, lots of people have it, or have had a hysterectomy because of it,” she said.

“Sometimes I think there’s a level of yuck factor, where people don’t really want to hear about your uterus, and I appreciate that,” she said.

“Also, some people get really embarrassed. Most people have been really good though, very matter of fact, and a lot of my male colleagues have been great as well.”

Endometriosis is diagnosed when tissue that usually forms in the uterus is found growing outside of it, sometimes attached to the bowel or other parts of the anatomy. With 120,000 people in New Zealand thought to be affected, it can cause pelvic pain, period pain, reduced fertility, or sometimes no symptoms at all.

While Ms Ferguson was diagnosed with the condition in her 20s, she had suffered from unusually bad period pain since her teenage years, and said that in hindsight, it should have been spotted earlier.

Doctors can try various methods to treat the condition, including birth control pills or laparoscopic surgeries to burn off the tissue. For some people, like Ms Ferguson, a hysterectomy, or surgery to remove the uterus, is eventually the recommended course of action.

She said she had been fortunate to have two children before that surgery was required, and felt the time was right for her to have her uterus removed “if it’s only going to cause me hassle.” But for younger women, she said, it could mean tough decisions about their plans to have children. 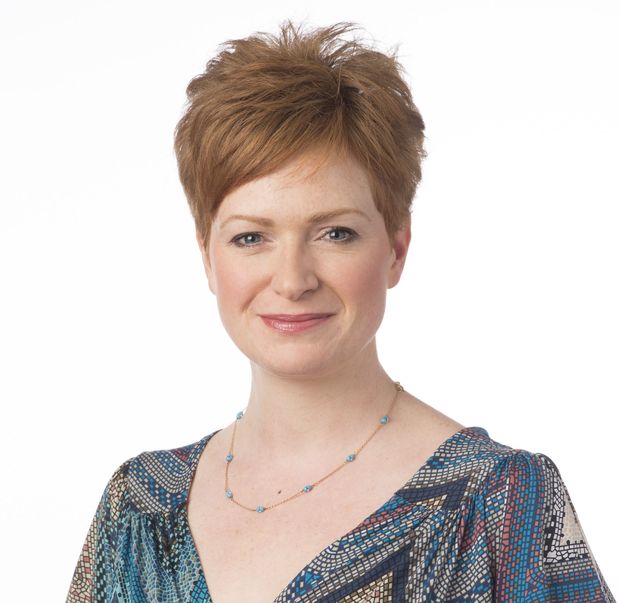 Ms Ferguson said the condition had been “extraordinarily painful” at times, and the extent of it was often misunderstood because it was largely invisible. She said she had often been in brutal pain while on air, with sweating the only visible symptom.

"Before I had children, it felt to me like this must be as painful as childbirth, but I had no yardstick to measure it by," she said. "Having had two children now, I can tell you it is as bad as childbirth.

"Having to carry on with your job, sort everything out, do all the things that everyone has to do, while dealing with that kind of level of pain, is a not inconsiderable situation."

Ms. Ferguson said her time as a war correspondent in the Middle East, when she had also had a bad bout of endometriosis, had in some ways been easier because she was "running around a lot". This seemed to ease the pain.

A standing desk in the Morning Report studio helped her get through the past few months, after Ms. Ferguson searched the internet to find out why she had worse pain while sitting down. She'd never been warned by a doctor that endometriosis pain was exacerbated by sitting, but found other internet users had the same issue.

The standing desk, and a hot water bottle before that, got her through painful days at work, as pain relief medication wasn't an option.

"Some medications really work, but they're often really strong," she said. "You can't talk properly when you’ve taken them, or at least it doesn't feel like I'm talking properly. I don't feel like my brain's working properly; it feels like it's sort of mush or porridge or cotton wool."

Ms Ferguson said good communication with her editor, Martin Gibson, during programmes when pain was particularly bad, had been important. She said the Morning Report editor had also been accommodating when she needed an occasional day off; sometimes the pain was so bad that working through it had left her exhausted.

RNZ’s Nine to Noon programme has reported in the past on the disruption to girls’ education in New Zealand of endometriosis, some of it undiagnosed.

Ms Ferguson encouraged people who suspected or knew they had endometriosis, and were getting short shrift from medical professionals or people they knew, to trust their instincts.

"You don't know how bad it is in connection with anyone else, and you don't really know what other people are experiencing. But if it feels bad enough to you, if it feels serious to you, I'd say keep trying to go to your doctor, and try to get to a gynaecologist.”

She said the issue highlighted the importance of access to gynaecologists across the country.

For more information, talk to your doctor or visit Endometriosis New Zealand online.