Midweek Mediawatch - hold on to the rails

Mediawatch's weekly catch-up with Lately on RNZ National. Colin Peacock talks to Karyn Hay about claims a new train service is a "railway renaissance" or a slow train to nowhere. Also: Stuff beefs up its business news; a tramping mag makes a fool of DoC - and a month after Jacinda turned Mike down, he says he doesn't want her back. Confused? You will be after this episode of Midweek Mediawatch 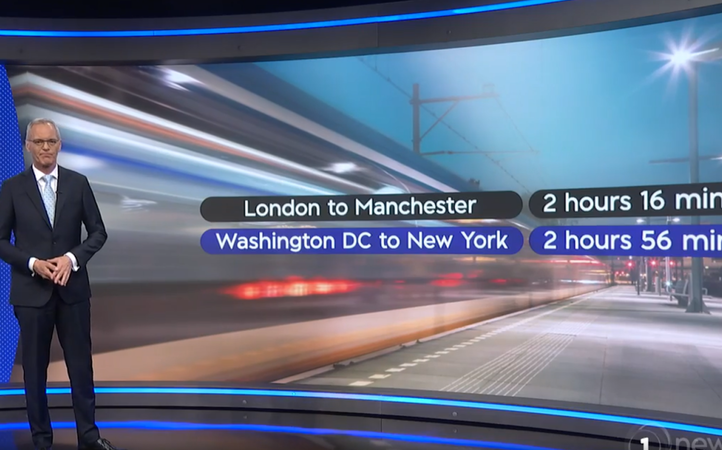 Reunited - Jacinda and the Hosk 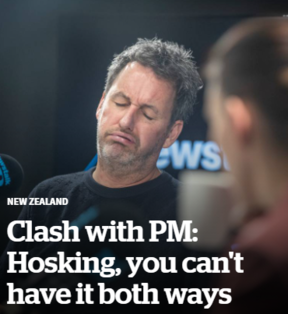 The PM spoke to Mike Hosking on Newstalk ZB on Wednesday for the first time since Mike Hosking announced she’d changed the way she fronts up to ZB - appearing when pressing issues demand it, but not every week.

Clearly the Trans-Tasman bubble announcement the day before was one such issue.

They had a chat for 8 mins or so with lots of to-and-fro about MIQ, and opening the borders - just like many of the ones they’ve done before.

"Did she answer the questions to your satisfaction, did we raise some reasonably salient points, did we demand some accountability and not get any, yet again?" he asked himself on air.x

"She didn't want to be here, she doesn't add anything when she is here, so who's the winner and who's the loser, that I guess is up to you."

He went on to say his bosses still wants Hosking to talk to the PM, but he doesn’t because “she never says anything when she comes on.”

It seems listeners are going to get more grumpy, reluctant interviews in future that neither party wants to do - with additional performative Mike Hosking gripes afterwards about how much he doesn’t like doing them.

"Newstalk ZB host says 'I don't want her back' on show"  was the Herald’s headline later, in a story quoting a PM's spokesman as saying: "She considers any subsequent issues to be a matter for NZME".

Barry Soper, the ZB political editor, then told his ZB colleague in a column for ZB and the Herald that Hosking's stance made no sense - and when he accused journalists of being asleep at the wheel on MIQ and vaccine stats he had simply overlooked the coverage that was there for all to see.

The big travel news on Tuesday was obviously that Trans-Tasman bubble announcement, but the same day was also the debut of the Te Huia - the Hamilton to Papakura / Auckland commuter train.

It was a consumer story, a political story and an environmental story all rolled into one. And trains make some people very emotional.

The 6 am start of the first public journey on Tuesday made it perfect for Breakfast TV.

John Campbell was striding up and down the platform, pointing and gesturing in advance on social media urging viewers to tune in on Tuesday

Te Huia, the train, about to leave from Kirikiriroa/Hamilton to Papakura via (and this is good news for that recently bypassed town) Huntly. Is it the "renaissance of rail" or does this slow, diesel train reveal how far we've yet to go? @Breakfaston1 - live from Te Huia, from 6. pic.twitter.com/sHmJx1WyR0

On the face of it ‘man catches train in the dark’ is not compelling live TV - but to his credit he kept up that level of enthusiasm during the journey itself. (The Spinoff’s Tara Ward rattled off a summary for those who missed it:  Where were you when John Campbell took a train on breakfast TV?)

He had plenty of company.

On the AM Show on Three , Karen Rutherford also rode the rails live on the show - almost as enthusiastic as Campbell about the ride, the creature comforts and the scenes.

And RNZ's Checkpoint on Tuesday did the return journey to Hamilton in the evening as a livestream with Nick Trubridge in vision trying to capture the moment it pulled up at its destination in Hamilton. it didn't quite work on cue but still gave people a vivid picture of what the new train was like.

But at times the coverage made it seem as though it was a completely new ride and experience. Yet the Northern Explorer covers the same route three times a week (and actually all the way to Auckland without stopping).

But what about the bigger questions of whether it will be a ‘the renaissance of rail’ as John Cambell put it  -- or a money-losing ghost train that's not exactly faster than a speeding bullet (train)?

TVNZ 1 news on Monday zeroed in with the drawbacks after that test run ride, and but that report was one of few to tell us what it actually costs to ride the train.

Likewise the viability of the service, the targets it will have to meet didn't get much scrutiny.

A November 2018 business case has all that info in it - but not much of it made it into the coverage. There was another one which explained why ‘bullet train’ speeds were ruled out  - it was one of four scenarios reported by Stuff that had multimillion dollar price tags.  That’s possibly a consequence of the media set-piece the previous day with the PM and the officials on board and political reporters were all on board for ‘a test run’ accompanying the PM, other ministers and local body politicians and officials on the train.

On Monday's ‘test run’/ media photo opp, the PM gave TVNZ a bland soundbite about building up patronage over time TVNZ’s Katie Bradford asked to Waikato Regional Council chair Russ Rimmington  - the guy who said it was the “renaissance of rail” - if the train was at risk of becoming “a ghost train."

“No, it won’t do that because we’ll give the tickets away if necessary. But, I don’t think that will be the case. This won’t fail,” he replied.

That’s a better quote than the PM gave. But would they really give away tickets? 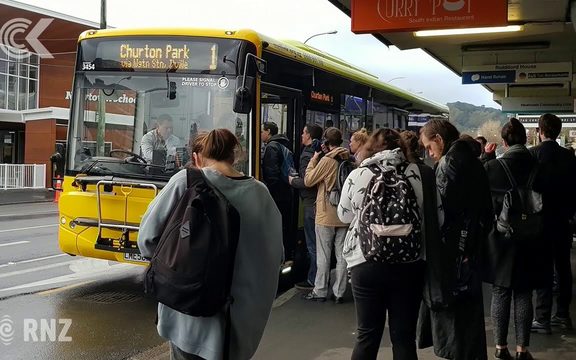 Dave Armstrong is a Wellington playwright and actor with a weekly column in the DomPost.

He coined the term ‘bustrastrophe’ when the capital’s bus system fell apart in 2019 and never quite recovered - though Covid disruption covered up the failings afterwards.

This week he asked: Are we heading for Bustastrophe 2.0?

It’s a brilliant column which begins with an anecdote of trying to make a meeting across the city on the bus - but goes on to say passengers are back in larger numbers post-Covid and our buses are simply not coping - and he tries to explain why.

There are increasing cancellations of buses at short notice - and the circumstances that created the first collapse are repeating - mainly driver shortages.

The column went well beyond the top-of-the-head personal ‘reckons’ that many columnists turn out - including the professional journalists and big-name broadcasters who given the privilege of space in our papers but who can’t be bothered making the same sort of effort.

He uses the personal anecdote as the way in, then tells you lots about how the transport model actually works, why it would be hard to fix  - and he has actually spoken to the key players and got fresh info and perspectives.

He discovered a proposal to top up wages to the Living Wage level has been rejected by the operator NZ Bus, now owned by an Australian company called Next Capital. The Tramways Union recently refused a proposal from NZ Bus that it believes would see all Wellington members take a substantial cut in wages and employment conditions.

“I fail to see how you fix a driver shortage by offering drivers even worse pay and conditions,” he wrote.

If Wellington does have a ‘Bustrastrophe 2.0,’ he will be quite entitled to hark back to this and say;’ “I told you so”.

Stuff beefs up business and economics 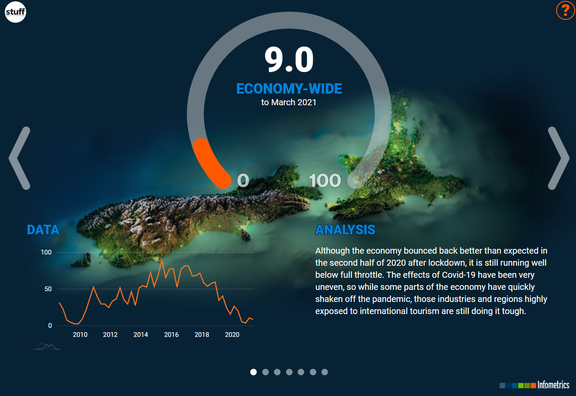 Stuff  - one year on under the new management of Sinead Boucher - continues to innovate.

One area where its rivals at the Herald were perhaps ahead of the game is in coverage of Business and economics and last wednesday Stuff upped its game by launching a new “publication and economic index” called The Monitor.

Stuff says the goal is to “provide a snapshot of New Zealand's current business climate . . and help the business community better understand the economy they are navigating.”

Last Wednesday’s one has lots of lucrative ads for investment funds and similar - and good article. 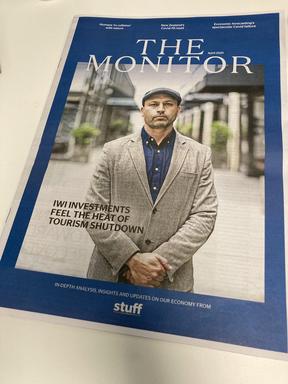 Similar in scope and scale to Stuff’s climate initiative The Forever Project - as a quarterly but backed with a full section on Stuff.co.nz.

But the Monitor has another online element  - an economic dashboard here with digital speedometers of nation economic performance.

The Monitor is produced by Stuff’s business team and appears as a section on the Stuff website. Readers can also access a digital version of The Monitor’s economic index here.

“The inaccuracy of economists’ predictions over the last 12 months means you could be forgiven for taking our forecasts for the next year with a sizeable helping of salt.”

April Fool media gags are usually pretty lame, but Wilderness magazine had a good one which was also a swipe at DoC’s recent over-controlling recent policy that proposed media apply for permits before any reporting and photography on conservation land.

"The Department of Conservation has announced that from June 1, all hut book comments will need to be submitted to DOC for approval before publication in any hut book.

“We are tired of people making silly remarks in hut books,” a spokesperson representing a DOC spokesperson said.

“We thought we’d stamped this out years ago by printing rows and columns with specific instructions so people wouldn’t just draw dicks or use the books as score pads for card games, but the tramping public just can’t be trusted.”

Anyone wishing to leave a comment in a hut book will now be required to email an ‘Application to comment’ form to DOC upon arrival at every hut. In event that a hut does not have internet service, trampers will be required to drop off the form in-person at a DOC office at the end of their tramp. If approved, the comments – including intended routes from a hut and any current weather conditions noted – will be added to the hut book within 28 days of the tramp’s conclusion."