Slim pickings - reporting the shortage of labour for fruit and veges

With borders closed, a severe shortage of people to pick fruit and vegetables could create serious shortages and high prices this summer. Politicians, growers and media personalities have all sounded off about it in the media - but the people who actually do the work are almost entirely absent in coverage of a problem brewing long before Covid-19. 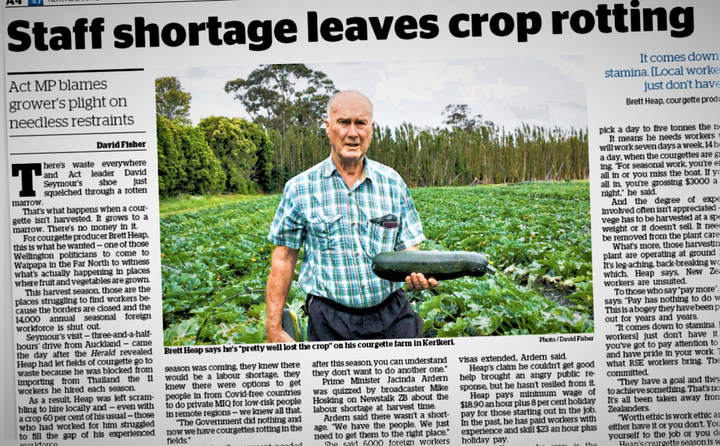 Pictures of Waipapa farmer Brett Heap in the NZ Herald last Tuesday, holding courgettes which had blown out into useless mushy marrows, were sad.

Just weeks ago courgettes were in the news for hitting almost $30 a kg in the shops, but these would only be good for compost because they couldn’t be picked on time. What a waste.

For years a crew from Thailand has picked his crop, brought in under MBIE’s Recognised Seasonal Employees (RSE) scheme. Since 2007 thousands of workers from offshore have been imported for seasonal work picking fruit and vegetables under the scheme.

But now that they have been locked out by the Covid-19 border closure - like the foreign backpackers who also did the job - it’s become clear horticulture depends upon them.

In recent weeks, sector representatives - and some vocal growers like Heap - have issued increasingly dire warnings about crops going to waste and eventual shortages over summer unless the borders are opened to overseas labour.

Heap’s story went viral on social media and sparked anguished talkback radio sessions but his unpicked crop wasn’t a new story - just another episode in a long-running one about our food supply and supply-and-demand tensions in the labour market.

And the media coverage of it has been dominated by the growers.

Heap is a long-standing and vocal supporter of the RSE scheme. In 2017 he told The Northland Age he considered quitting the business because the government wouldn’t let him bring in more than nine workers from Thailand “with the skills and stamina” to pick his crop.

He also told the paper he had been told he “would have to take Pacific Islanders.” but he wasn’t keen citing “a potential clash of cultures.” He had “given up all hope of employing locals” because they weren’t reliable.

Last year Heap told TVNZ’s 1News restricting seasonal foreign labour was a “effectively a restraining mechanism not just on us as individual growers, but on the industry in its entirety”. 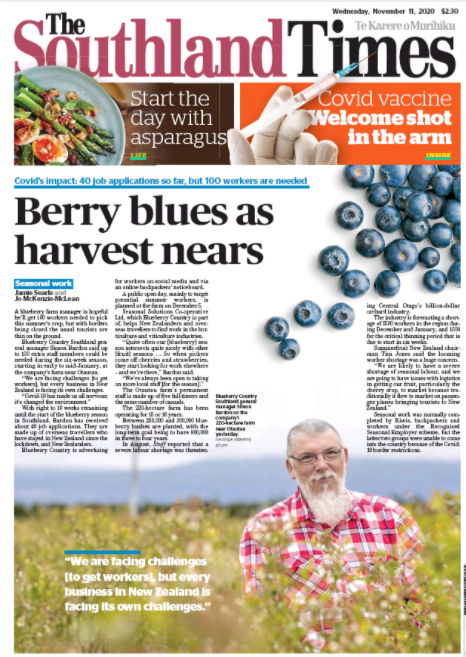 That report in August last year warned: “Kiwis could be paying more than double the price for strawberries this summer as one of the country's biggest growers fears she will be forced to shut down her business.”

That grower was Francie Perry of Perry’s Berries in Wiri - and back then her lobbying for more foreign workers got a quick result.

In September - when the election campaign was heating up - Francie Perry told TVNZ News: “It’s really simple. No overseas workers, no pickers - no work for anybody.”

A warning that her strawberries could rot on the ground this summer alarmed John Campbell on TVNZ’s Breakfast show two weeks later in mid-October.

When he raised that with the finance minister, Grant Robertson told him it was "a two-way street" and “there'll need to be a little give and take around things like rosters, supporting people with transport and wages as well" to get New Zealanders in the jobs with the borders closed.

In mid-September Stuff reported trade minister David Parker telling a Southland Chamber of Commerce event: ‘’I am a hardass there. Compete for labour. That’s my first and strongest message.’’

That part of the story has had a lot less media attention.

When Francie Perry pleaded for additional workers to fill shortages in September, she also found herself facing questions about the fine print in Perrry's Berries' jobs ads.

“Most of the work available is paid by bonus piecerate – where you are required to produce enough to earn at least the current minimum wage to retain your position.”

She told Newstalk ZB it’s not just a question of money but also skills and work ethics.

“If we have a base number of people coming from Apia who are very physically fit and who unlike us - including myself - don't spend a lot of time in front of a computer - then they can handle it,” she said.

Two weeks later, TVNZ aired fears for the cherry harvest in the South, where growers were trying new ways of getting local workers as well as pleading for foreign worker exemptions.

“Good money if you get off your backside,” he told listeners - but he was then immediately contradicted by texts from listeners who’d actually done the job but not found it lucrative.

The same day Stuff reported only six out of 50 available campervans have been booked so far.

“It’s hard work but good work - and it's nice outside,” he insisted.

Was he speaking from experience of actually picking fruit and veges himself? He didn’t say.

But it highlighted the problem with the coverage of this.

We’ve heard a lot in the media from concerned and disillusioned growers, horticulture sector reps, politicians and even TV and radio hosts. But the people who do it have been mostly absent.

In August, Newsroom published eye-opening stories of the exploitation of RSE orchard workers, but a September episode of its daily podcast The Detail - a co-production with RNZ - did not include anyone who actually does the work.

But they were at the heart of this on TVNZ1 News last weekend:

Kiwi fruit pickers have simple message as growers cry out for labour – 'pay us more'https://t.co/ooDy13uQhZ pic.twitter.com/jLhtUBFqy4

Kristin Hall’s report foregrounded the experience of people who really knew how hard and rewarding the work was  - and, tellingly, none were willing to be identified.

A First Union representative told Hall the union is currently bargaining with a “very large horticulture employer” to "reach an agreement on pay and conditions in the kiwifruit industry”.

That hasn’t been reported anywhere else.

Six weeks ago, Stuff farming reporter Bonnie Flaws took on the issue in a piece headlined: Is pay the problem? How much in-demand orchard workers really earn

She examined the books of a contractor supplying labour to growers and spoke to an RSE worker from India. Her article also featured a veteran Kiwi worker on the scene who said the work is hard and the pay doesn’t match it - and she spoke to an orchard owner who set up her own business to avoid using contractors who clip the ticket.

On Wednesday, there was news that showed horticulture can plan for a future incorporating a local workforce.

Kiwifruit growers have boosted accommodation for seasonal workers since 2018 - and the industry has a five-year plan to double places.

The urgent story of the moment is the critical labour shortage - and what it might mean for growers, consumers and workers  - and what can be done about it right now. The needs and fears of the growers are real.

But this is also the story of a $9 billion dollar industry whose exports have gone up this year in spite of Covid-19 disruption - and how it has ended up highly dependent on about 15,000 foreigners working for low wages.