A closer look at a 'good news' survey

When a prestigious publisher said New Zealand was the second-safest country in the whole Covid-stricken globe, it was no surprise that made headlines here - and it was touted as evidence that we’re on the right track. But did this story really belong in our bulletins? 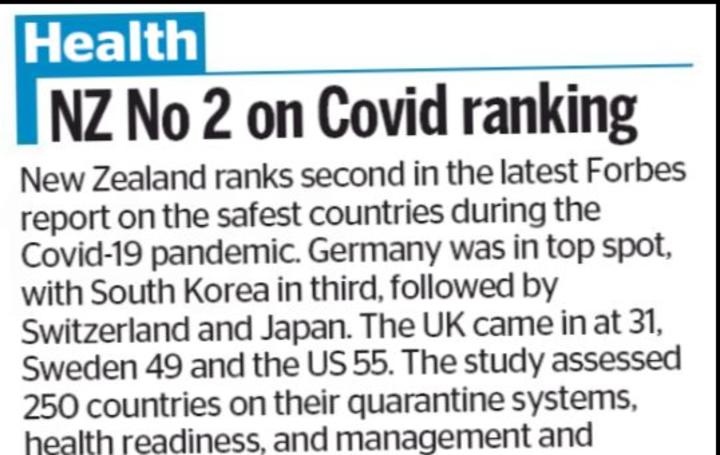 The findings had been published by Forbes, a long-established US-based business news outlet.

It was reported by Newshub at 6, and on TVNZ 1 Q+A host Jack Tame cited it as evidence New Zealand’s Covid containment strategy is working in an interview with ‘Plan B’ spokesperson Dr Simon Thornley.

RNZ.co.nz had a news story about it too the same day which was then republished by Stuff, TVNZ and the Otago Daily Times.  Newshub’s website and Herald on Sunday carried their own reports on our silver-medal status in the new survey.

Maybe so - because Forbes is a media name with some credibility and clout.

But - as the Herald and Newshub had pointed out - it was not Forbes that did the survey.

The complicated calculations that spawned the Covid rankings had actually been compiled by an outfit called The Deep Knowledge Group - not exactly a household name.

The Group’s website declares that “Deep Knowledge is Transcendent Power.” It says the survey has “140 parameters” and “35,000 data points.” The 36-page methodology document is bewildering.

But none of the news stories published here addressed evident inconsistencies in the findings.

The report claimed to have assessed 250 countries. By most measures there are not that many nations in the world.

The Deep Knowledge Group ranked 252 “countries and regions” of the world - and some of these make little sense.

Among the cellar dwellers in 221st place was the French-run Caribbean island of Saint Barthelemy where just over 9000 people live.

It has had only 21 cases and the authorities there - acting on advice from France - locked down early on, began testing and closed its borders.

Surely it would be a place pretty safe from Covid-19?

One place below St Barthelemy is the Siachen Glacier is in eastern Karakoram range of the Himalayas - a territory disputed by India and Pakistan.

The only people you’ll find up there are occasional Indian Army patrols and they don’t stay long because it's so inhospitable but it’s pretty likely to be safe from Covid-19.

Ten Pacific Island nations have no Covid at all - but all are ranked low in the survey.

Taiwan has had seven deaths in total and fewer than 10 cases in the past month  - yet it was rated at number 15 in the world - well below China.

Meanwhile Germany tops the Deep Knowledge list as the safest place from Covid-19 - even though nearly 10,000 people have died there so far, there have been about 1000 new cases a day on average over the past month.

And as writer John Koetsier pointed out himself in Forbes’s coverage, Sri Lanka - which has had 12 reported deaths so far - hardly deserved to be 92nd.

When statistics professor Thomas Lumley took a look at this on the University of Auckland’s Statschat blog (Are we number two on COVID?) he concluded the latest rankings didn't stack up well with those in Deep Knowledge’s earlier rankings in June.

Israel was at number 3 back then and has had a bad time since with 27,000 active cases in a country with less than 10 million people.

Prof Lumley said the index and its surrounding report contained useful information, such as “the importance of political will to act and social acceptance of restrictions”.

But he also found Deep Knowledge’s findings didn't tally with other rankings like the Global Health Security Index run by Johns Hopkins Center for Health Security and The Economist Intelligence Unit. Only Australia and South Korea featured in the top 10 of both.

Having published - and publicised - the Deep Knowledge survey, Forbes might be regretting it now.

“I’ve received comments from people in multiple Caribbean nations - and from people in Vietnam - wondering why their countries did not rank higher. In addition, some people are concerned that racism or bias might be reflected in the rankings,” journalist John Koetsier said in an online story this week.

He said he talked to officials in the Caribbean and officials in Vietnam for more information - and asked Deep Knowledge Group for an explanation.

Deep Knowledge Group founder Dmitry Kaminskiy said they are still working on their methodology and finding it hard to get consistent data in some places.

Regarding Vietnam, he said “probably our mistake to put it into Tier 1, and in the next iteration most likely it will move into Tier 2”.

But he added he had recently received information from experts in Asia that Vietnam is “hiding cases of infected people”.

Forbes’ John Koetsier said he doubted that explanation would satisfy skeptics - and that his research turned up no corroboration of the claim that Vietnam is hiding Covid-19 cases.

But one country where Deep Knowledge’s rankings have been applauded is Israel which was rated number 1 in the first survey in April.

Back then the online Times of Israel reported Prime Minister Benjamin Netanyahu had been trumpeting that triumph on social media and in interviews - along with some other Israeli politicians - so they took a closer look. 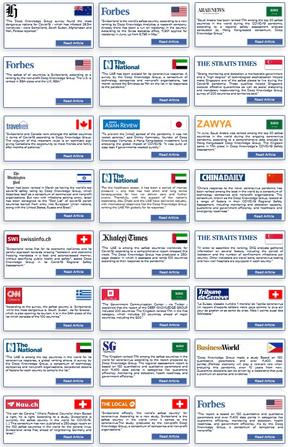 The company is based in Hong Kong and originally operated mainly as a venture capital business. Founder Dmitry Kaminskiy said he planned to invest in longevity and “life-extension technologies” around the world.

Times of Israel reported that Kaminskiy bought a business called Interactive Bank in Russia in 2015 and told media it would be the best in the world with artificial intelligence technology. A year later, the bank went bust and its license had been revoked.

Times of Israel described how other founders and associates of the company are listed as advisors to a variety of overlapping companies and agencies, many of which the group appeared to have set up itself.

“Our Analytical and Non-Profit Activities are powerful tools for journalists and other strategically relevant people and organisations,” the Deep Knowledge Group’s website says.

The site also proudly says there are 500 online articles from news outlets all over the world reporting its research.

When its next set of rankings come out, bona fide media should probably take a good look at them before they decide to take up the tools again.