One stop shop for the nation’s local news

The business of publishing papers has never been tougher, but dozens of independently-owned ones still doggedly cover local news all over the country. Now their stories can be found on a new website which promises no clickbait and no Kardashians. 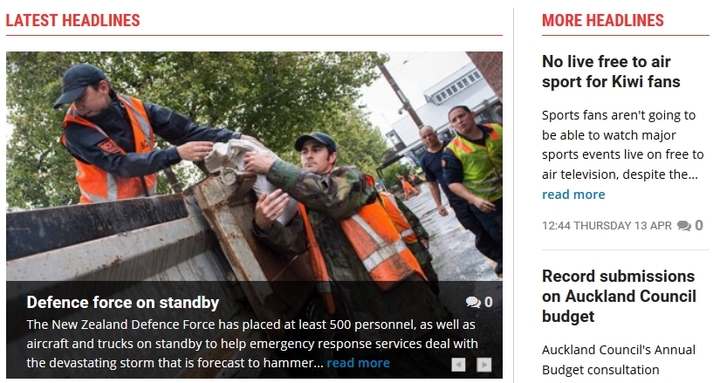 Newsie.co.nz reporting the latest ahead of the arrival of Cycolne Cook. Photo: screenshot

The internet has made the newspaper business tougher than ever these days, but there are still many independently-owned operators putting out local papers and running news websites around the country.

A few are daily papers with a cover price like The Gisborne Herald and The Wairarapa Times Age, which was once owned by the New Zealand Herald’s publisher was but sold back to a former staff member last year.

Many more are are free weeklies harvesting income from ads from local businesses. The Community Newspaper Association lists over 80 separate titles around the country as members.

The Record covers news and views in the Selwyn District. The River City Press does the same in Whanganui, and The Pohutukawa Coast Times ("the paper with the most for the coast") covers rural areas south of Auckland.

Most people outside those areas won't see those papers' news stories unless they stumble upon their websites, but now news from lots of local papers can be found on new website Newsie.co.nz.

Newsie is based in Tauranga and run by Sun Media, which was established in 2000 and now has a staff of 12 journalists. It publishes the Weekend Sun for the Bay of Plenty and it has also covered local news on the website sunlive.co.nz for the past seven years.

This week Sun Live’s staff and its site have been flat out covering the impact of Cyclone Cook posting regular updates and emergency information on the site and its Facebook page.

"The idea was to give these regional papers and news services a national voice and we're doing that," general manager at Sun Media Jay Burston told Mediawatch.

He says none of the papers they have approached to supply news have turned them down so far.

Some stories from the nation's local papers are only likely to be of much interest to people there. Is there really much point in giving them a national platform?

"The site is broken into two sections, so those stories go into our regional sections. New Zealand is famous for two degrees of separation so even something that effects someone locally will be of interest to people elsewhere who know them and it could be of interest nationally," says Jay Burston.

He cites a Nelson Weekly story on Newsie about a local homeless man who has camped out in the city centre outside Farmers for weeks and resisted repeated attempts to move him on. It's a story that will resonate with others who have 'characters' living rough in the centre of town.

"We have coverage (from local papers) from Northland to the bottom Southland but we use agencies for news we might miss," said Jay Burston.

It also covers rural issues in text and in video from ex-CTV stalwart Rob Cope-Williams and his 'On The Land' show.

"Clickbait is banned; the Kardashians outlawed. Newsie will have real news about Kiwis and we'll never ask you if you can believe what happens next," the site says. "Tramps will not buy Ferraris and celebrities will have to earn a mention, not merely get a haircut or change spouse."

But if clickbait works, why not adopt it?

"You can get that fluffy stuff and entertainment news from so many sources around the world," he said. "We wanted to do something different." 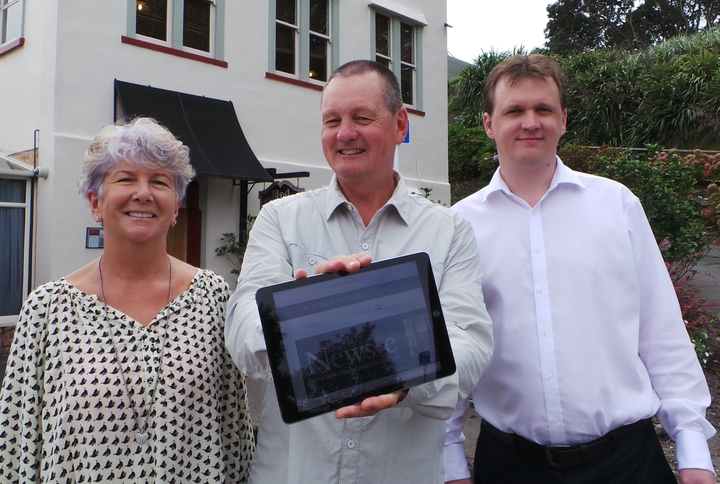 Newsie has an Apple and Android app and has also embraced Facebook.

"Facebook drives a lot of people to look at those stories and if they like them they come through to the Newsie website. The link to social media is importnat to everyone these days," said Jay Burtson.

"We’re now over 50,000 likes on Facebook and in April have a reported reach of nearly 600,000 so far. Our website traffic is already twice as much as last month's, and we’re only 12 days in, " he told Mediawatch.

Next month, The Commerce Commission is due to give its final verdict on whether this country’s two biggest publishers of news should be allowed to merge into one. If Fairfax Media and NZME get the green light they’ll dominate the national market for newspapers and news online.

Jay Burston says Newsie's not in competition with the big guns.

"We do cover similar news, but a lot of what we have is not covered by them," he said.

"The whole premise is the connection with the regional paper partners. We decided we would provide actual news and not the entertainment stuff people tell us they're fed up of seeing", he said.

Fairfax and NZME argue they can't carry on covering news in the regions without the scale and economies a merger would create.

"We have been speaking to independent companies from several places where the big guys say they've been suffering  - and they say they're thriving," Jay Burston said.

"We truly believe the reason Sun Media is successful - and these other regional independents are successful - is their passion for news in the areas they live in. I don't know every market in New Zealand or what people there think of the service they get from the big guys. Only the regions can speak about that really," said Jay Burston.

If their online engagement with Newsie continues to grow, that will speak volumes for the appetite for local news.