News of the Cadbury factory's closure came as a big blow in Dunedin this week - especially for those likely to lose their jobs. But they weren't able to tell the media how they felt about it. 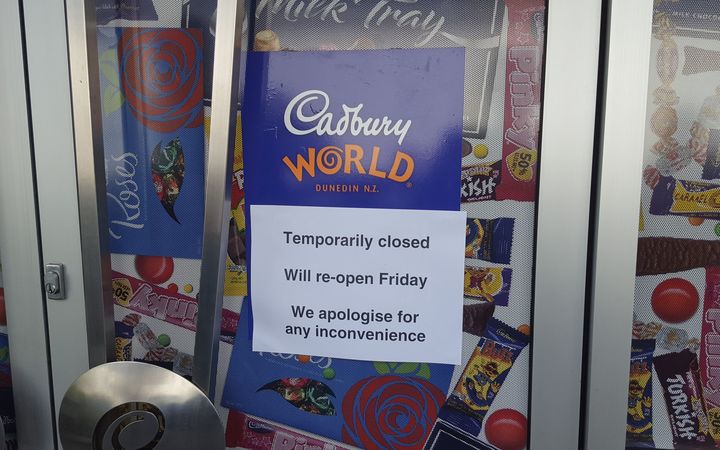 Last Thursday, The US-based owner of Cadbury's - Mondelez international - announced it will close its factory in Dunedin in 2018.

More than 360 staff face an uncertain future. At least 200 of them will lose their jobs before the end of this year under the plan unveiled last Thursday.

But their voices were missing from most of the stories about it.

Staff leaving the announcement told reporters they couldn't make any comment. They had been given information packs which included cards which said all media inquiries should be referred to the corporate affairs division of Mondelez.

One woman stuck her's on her forehead for Fairfax Media media to photograph.

Cadbury's staff in Dunedin - and reporters -have been here before.

Back in 2008, the Cadbury management in Melbourne beamed in via satellite to tell a meeting of Dunedin staff one-sixth of their jobs would go. They were also handed cards which told reporters to ring Melbourne for any comment.

By contrast, getting the line from the Melbourne management was no problem in 2008.

Using the same satellite they'd used to beam the bad news to their workers, Cadbury's across the ditch sent out its own interview of Cadbury’s managing director making the case for the cuts. As you'd expect, the questions asked weren't exactly searching ones.

This week, Mondelez International created a special website about the Dunedin closure which said:

"We will provide significant support to help our people move into the next stage of their lives and careers".

But why were "its people" not able to speak to the media once again?

In contrast to 2008, Mondelez regional vice president  Amanda Banfield came to Dunedin to break the bad news in person.

She told Fairfax Media’s Hamish McNeilly some staff had said they did not want to have to deal with the media and the policy of referring requests for comment to the company was "to give employees time and space and a difficult time."

When Hamish McNeilly asked if workers could be dismissed for talking to the press, she replied: "Absolutely not".

But workers coming out of the meeting seemed in no doubt they must not speak to reporters. Their information packs also warned them to “use their best judgment” in any social media posts about the issue.

The E Tu union said this amounted to "muzzling people in a community which needs to debate what has happened to its fourth biggest employer".

After a meeting with the union on Friday, Mondelez insisted there was no "media ban".

Two long-serving employees - both E Tu members - told reporters about their sadness and that they were determined to fight the planned closure. It was the first time any of the Dunedin workers' thoughts had been reported.

So were they gagged by the company - or not?

Mediawatch contacted Mondelez International in Melbourne to clarify its policy, and that was not a simple matter:

We received this initial reply from a spokesperson in Melbourne who did not want to be named:

"There has been no media ban implemented in response to yesterday’s proposal announcement. Our existing media policy which applies to all Mondelēz International employees, remains in place.”

But what exactly is its long-standing policy? And what would happen if employees talked to the press?

"If employees are contacted by media on any topic, they should refer them to Corporate Affairs."

If employees do give comment of their own bat - what then?

"As with all of our other policies, we would consider any breaches on a case-by-case basis.”

So would that mean mean an employee in Dunedin who is asked to comment on the closure by a reporter  would have to ask Mondelez international's corporate affairs division for permission to make a comment? A comment which would certainly be scrutinised by corporate affairs later on?

A Mondelez International spokesperson then declined to be interviewed  - and would only say:

Under this policy, any Cadbury's worker with something to add about the closure of a factory after 80 years in business will feel anything but comfortable if they're hoping to hold on to a job there  - or negotiate a redundancy deal.