Why have so many media outlets reported that processed meat is as likely to cause cancer as smoking or asbestos?  No scientist has said any such thing. Where were the experts to tell us what was true and false, asks Mediawatch. 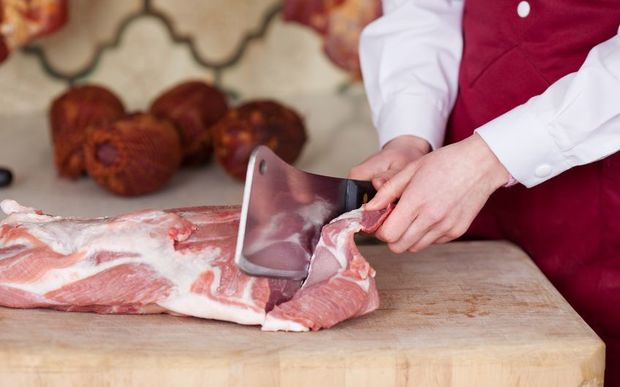 When the University of Auckland's professor of biostatistics Thomas Lumley saw that an upcoming assessment of meat by World Health Organisation's International Agency for Research on Cancer (IARC)had been leaked to newspapers in the UK, he braced for a raft of misunderstandings.

"If the leak is correct,' he wrote, "processed meats will be joining alcohol, plutonium, sunlight, tobacco, birth-control pills, and Chinese-style salted fish in Group 1. These aren’t all an equal threat, but the scientists believe all of them are able to cause cancer at the right dose".

In other words, while the IARC assesses a range of things as belonging to its Group 1 category they are not all equally carcinogenic. But the headline-hungry British press didn't make that distinction.

In The Guardian last Monday, the headline was:

"I expect this to spread," wrote Prof Lumley.

It certainly did, and it spread here in no time.

Avoid bacon and sausages... they're as bad as cigarettes

According to the World Health Organisation, processed meat like bacon and sausages are as big a cancer threat as cigarettes

The following day, The New Zealand Herald published a more helpful piece, from The Washington Post, online, but chose the headline "Should we all become vegetarians?"

The accompanying image suggested we might actually become vegetables . . . 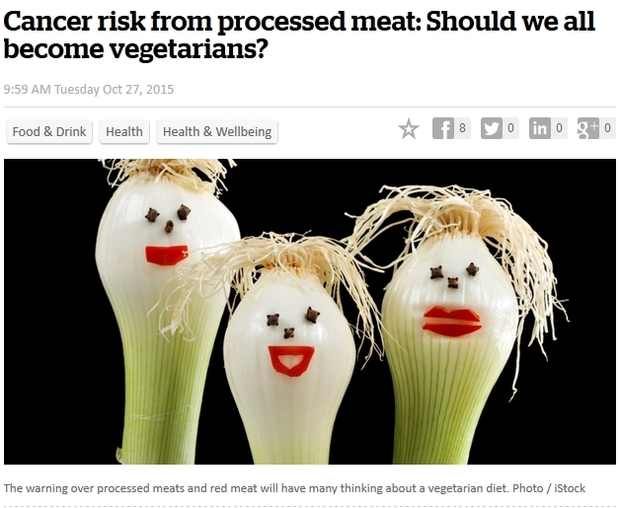 But mostly, the New Zealand media served up stock images of succulent sausages and mountains of pink and red meat alongside an ever-growing number of stories about the reported risk.

Under a huge hamburger, stuff.co.nz published a different Washington Post piece, which listed items in the IARC's five categories of carcinogenicity, with the headline:

After bacon-gate, here's 480 other things the World Health Organisation says may cause cancer

Oddly, the story listed fewer than than 60 individual items.

It was even worse on TV.

On TVNZ's Seven Sharp, host Toni Street said: "Bacon is as bad for you as smoking, apparently. That gloriously 'clickbaity' headline comes to you from the World Health Organisation".

Of course, it didn't: it came from the news media not letting the facts get in the way of a scary story. There was nothing even remotely "clickbaity" about the IARC's press release [pdf], its summary report [pdf] or its Monographs on the Evaluation of Carcinogenic Risks to Humans.

Still, Seven Sharp asked is bacon really a killer? and reporter Tim Wilson waved meat and cigarettes at passers-by, in Auckland, and blamed “trigger happy media” and "the headline-happy UN" for the cancer confusion. He said it was "common sense" that moderate meat consumption couldn't be as bad as smoking - and he was right. That's what all the experts had been saying, but Seven Sharp had no time for them.

Toni Street wrapped up the programme by telling viewers this was "good news for bacon lovers". An odd conclusion given that higher rates of some cancers have been linked to high meat consumption for some time. The upshot? Seven Sharp gave its meat-eating viewers no idea whether they were at greater or lesser risk of cancer than they had previously assumed.

New research shows red meat & processed meat may have cancer risks but what does the science actually say? 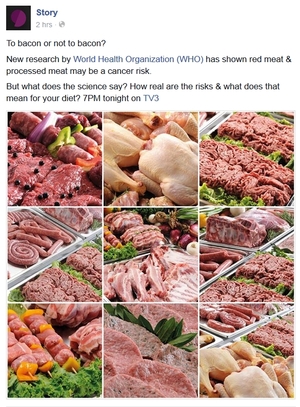 In fact, there was no new research - the IARC weighed up existing evidence and reclassified red and processed meat. Story host Duncan Garner had a handle on the significant facts when he interviewed an expert on Radio Live.

However, later, his Story co-host Heather du Plessis Allan, speaking on Radio Live, said the World Health Organisation (WHO) had said meat was "as bad as asbestos," and on TV3 that night she waved a packet of steak around and said she would be ignoring the recommended safe limits.

Having promised to tell viewers "what the science says" on the issue, there were no scientists in the show's main report. Instead, reporter Julian Lee, dressed in a lab coat, cast doubt on the data reviewed by the IARC. He told viewers they would not have to worry unless they eat "five cheap sausages or a packet of bacon a week.

"And even then," he said, "you're more likely to be killed in a car crash going to buy the sausages than getting cancer from them".

He didn't elaborate on how he had worked that out.

Almost 600,000 people watched Seven Sharp and Story on Tuesday. The presenters and reporters very much gave them the impression the IARC overestimated meat’s carcinogenic potential, and there wasn't a single expert present on either programme to confirm or contradict that.

The jokey reports were all pitched at consumers of meat, even though the story concerned our national economic health too. Hardly any coverage considered whether meat production and exports could be harmed if worldwide consumers turned away from red meat because of cancer fears.

The story was a particular challenge for TVNZ's Breakfast show, given its commercial sponsor:

TVNZ's Breakfast is sponsored by bacon. This is awkward . . . Photo: screenshot

The Breakfast reporter covering the a story declared:

"I am a bit overwhelmed by all this information. I think we need a list of foods we can eat".

The real problem was there were too few useful facts in the coverage even though they wouldn't have been hard for reporters to find.

Next May, the IARC's experts are due to meet and consider coffee. Let's hope if they decide to reclassify it the media is better prepared.