Richie’s no cheat, say our sports scribes - but the data disagreed. And was the biggest-ever rugby upset big in Japan? Seems so, but the media mostly missed that. Mediawatch looks back at the first week of the Rugby World Cup in the media.

Just before Japan played South Africa last weekend, TV3’s Melissa Davies was surprised that few Japanese visitors in Trafalgar Square were interested in the rugby. But it would have been a different story in Brighton where the game was actually played.

Japan’s long-odds, last gasp win over South Africa then gave the journalists a new task: setting out how big a deal this really was.

“This is the biggest upset in the World Cup, in any sport, EVER.

But straight after that he wrote . . .

Or that’s what it feels like for now. In the end, if the Springboks can re-group, it might not make a huge difference because of the way Pools A and B are set up”.

. . . which took some of the steam out of it really. But then Chris Rattue ramped it up again with this:

Who cares about the ramifications for now, because this is bigger then Ben Hur. This is like Daffy Duck out-running Lewis Hamilton, or a New Zealand tennis player beating Roger Federer.

Steady on. That comparison could be a gross insult to a team in the top 12 of world rugby - and rising. They probably wouldn’t like the Daffy Duck reference either. 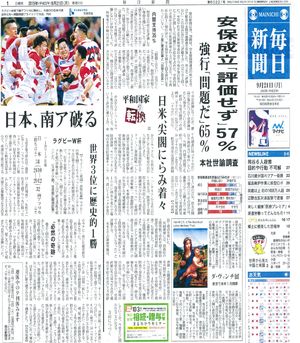 The front page of Mainichi gives the win almost equal billing with a story about public opinion on defence policy and Japan's constitution. Photo: screen shot

In another New Zealand Herald story headlined "South African media react with fury" Gavin Rich from the South African website SuperSport said it was “embarrassing,” and Afrikaans newspaper Die Rapport called it "the darkest day in South African history". Over the top, but hardly “furious”.

Supersport’s Gavin Rich also featured in Stuff.co.nz’s media roundup along with two British papers, but just one English-language paper in Japan was quoted. Similar stories overseas were the same. There was no authentically Japanese media reaction.

But there certainly plenty in Japan itself. Bloomberg reported that the public broadcaster NHK had Japan’s "historic" victory as its top news and Sports Nippon newspaper called the victory a "miracle”.

#RSAvJPN #RugbyWorldCup You couldn't write this...

Yomiuri had the big win on its homepage too, and a banner looking forward to Japan’s next game.

Mainichi had it on the front page the following day, and two entire pages on the game in its sports section, and reminded readers about a less glorious result from their years of bitter struggle. 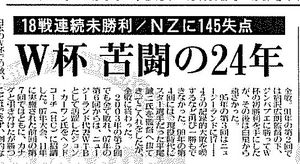 Mainichi reminds Japanese readers how the All Blacks once scored 145 points against them. Photo: screen shot

Last Sunday Fairfax Media interviewed two delighted Japanese teenagers in Auckland, one of whom said the Japan's New Zealand-born captain Michael Leitch did a post-match interview on Japanese television entirely in Japanese. It seems the media here could use his skills more than Japan’s.

Given that Japan has strong links to New Zealand through players and coaches, it is a rising force and the host of the next World Cup, it’s a pity their media's colourful response to the big win went unrecorded when media elsewhere went looking for reaction.

Did the Brave Blossoms' win also ramp up our rugby writers’ fear of an upset? 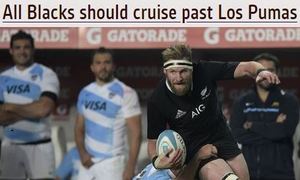 How RNZ's Benchwarmer reckoned the Argentine game would pan out . . . Photo: screen shot

If those are the virtues we show off to the world during Rugby World Cup 2015, then we'll all hold our heads up with pride.

But as it turned out, the All Blacks were behind for a while in the second half with two men in the bin, including Richie McCaw, hanging his head in shame for a cheap trick.

Under the headline Richie McCaw is ill-disciplined - the stats prove it he analysed figures from ESPN to show that even though Richie McCaw has been sin-binned a lot less than his international peers, he has infringed more often. 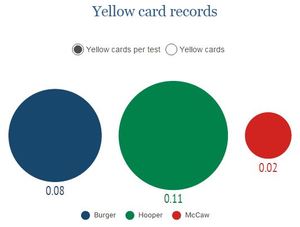 One of these things is not like the others: stuff.co.nz analysis of McCaw's yellow cards. Photo: screen shot

That same day the front page of The Press ran this from Fairfax rugby writer Toby Robson at the World Cup:

McCaw's no cheat. Let's get that straight. The label is unfair on a bloke who has been largely exemplary over 143 tests. However, that doesn't change the fact his actions will now be under a microscope to rival the Hubble telescope over the next six weeks.

Leaving aside how a microscope could rival a telescope, is that a case of not letting the data get in the way of a good story?