Winter is coming? Churnalism freezes out the facts 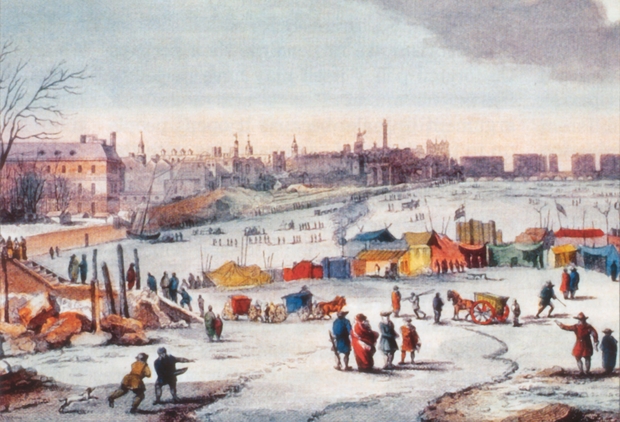 How did scary stories of an ice age just 15 years from now spread throughout the news media last week? Mediawatch looks at the role of a couple of stray quotation marks, some dismal churnalism - and how the media reacted when the experts pointed out this was mostly rubbish.

Distressing news that a new ice age may be under way in just 15 years from now suddenly surfaced in the media recently.

The cold could freeze major rivers, the stories said, as happened in Europe and North America roughly three hundred years ago. Some of these stories carried images of engravings and paintings of people skating on the Thames in London back then.

Obviously, a new ice age would radically change life as we know it, and not for the better for most people on Earth. And there was no shortage of news outlets here giving us the bad news.

“Scientists in the UK claim they have figured out how to predict the sun’s solar cycle and temperatures look set to plummet“.

The New Zealand Herald had the headline Sun cycle's cold facts say mini ice age on the way and Fairfax Media said Now it looks like we're in for an ice-age.

These were versions of an earlier story from the UK’s Daily Telegraph which said:

“The earth is 15 years from a "mini ice-age" that will cause bitterly cold winters during which rivers such as the Thames freeze over, scientists have predicted”

The story said a symposium in Wales had been told low sunspot activity might create a ‘Maunder Minimum‘, the name given to the period between 1645 and 1715 when Europe and North America experienced very cold winters.

It quoted Professor Valentina Zharkova from the UK’s Northumbria University as saying the result would be similar to freezing conditions of the late 17th century.

The US-based Weather Channel also reported a looming freeze as a distinct possibility based on her findings, but that was odd because when she appeared on Morning Report last Monday Prof. Zharkova couldn’t say what the atmospheric impact of the irregular solar activity would be. It isn’t her area of expertise, she said.

The Daily Telegraph’s chilling yarn also had this alarming claim:

“Solar activity will fall by 60 per cent as two waves of fluid "effectively cancel each other out", according to Prof Zharkova. But she didn’t mention that dramatic weakening of the sun in just a few years time on Morning Report either.

So how come there are so many stories in the news about her work with the words “mini ice age” in quotes? In her TVNZ piece, reporter Renee Graham even signalled “air quotes” when she mentioned the phrase. 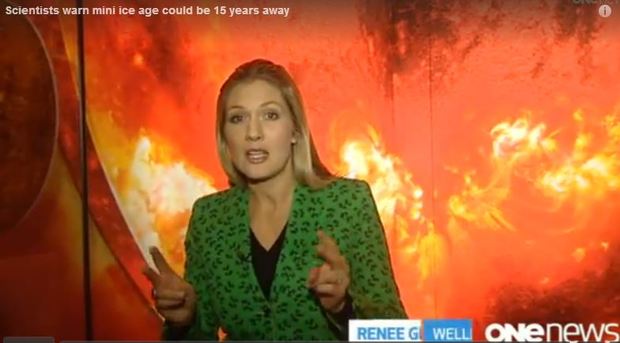 So who or what was quoted, if not Prof Zharkova or her research?

The culprit is the Royal Astronomical Society in the UK. In a press release issued before Prof. Zharkova presented her findings in Wales, the Society said:

And it concluded by quoting Prof Zharkova like this:

“When there is full phase separation, we have the conditions last seen during the Maunder minimum, 370 years ago”.

It’s not hard to see how news editors put two and two together there – and came up with “mini ice age 15 years away”.

"The lesson for us is that even having that phrase in quotation marks was a mistake. No one is seriously suggesting the world is about to enter an ice age".

But that’s exactly what news outlets have been suggesting in stories based on that press release all over the world.

Since then, those aware of the problem have worked hard to set the record straight.

The Daily Telegraph’s online readers have left messages like this:

And the Washington Post chose a headline to leave no doubt in its readers’ minds: No, Earth is not heading toward a ‘mini ice age’

Here in New Zealand, Dominion Post science reporter Olivia Wannan said the heat of the sun has only varied by 0.1 per cent over the last 2000 years, and:

”The 60 per cent drop referred to by the Astronomical Society was within this fractional difference between the maximum and the minimum. So, no need for sunscreen salespeople to panic“.

Or anyone else for that matter.

In a similar piece, Dr Sarah Jane O’Connor, a recent journalism graduate with a science background, pointed out that “there is no consensus that the sun's activity was behind the so-called Little Ice Age which brought cooler temperatures in the late 17th and early 18th centuries”.

Online comments posted after these articles show that climate change sceptics seize on evidence the sun’s activity might affect the climate more than human activity. One of the Top 5 readers’ comments selected by stuff.co.nz on the issue was this:

"What happened to global warming? I guess I better keep burning tyres in the back yard. That is if this theory is any more sound than the global warming one. It would be funny if all the hype hadn't been used to advance political agendas and bring the world's economy to ruin."

Scary science stories may be good for publisher’s online traffic, and easy to run when they’re based on pre-release hand-outs and rehashed versions of overseas stories, but they don’t do much for the reputation of the media if the crucial facts are frozen out.