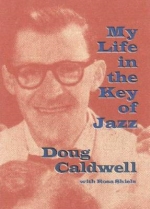 Christchurch pianist Doug Caldwell has recently released his book My Life In The Key of Jazz co-written with Rosa Shiels and published by the Christchurch Polytechnic. Doug has been playing and performing for over 60 years and host Colette Jansen talks with him about the inspiration for his book.  It includes stories of his contact with artists like Emily Remler, Buddy Tate and one of his favourites - NZ’s own Mavis Rivers.

Kenny Drew: I Could Write a Book
Composer: Rodgers / Hart
From the album: Kenny Drew - The Riverside Collection
(Riverside)

Doug Caldwell: Everything I Love
Composer: Porter
From the album: Waiting At The Red Door
(Polyjazz)

Buck Clayton: Out of Nowhere (7.13)
Composer: Green/Heyman
From the album: Jam Sessions From The Vault
(Columbia)

Watch a performance and interview with Doug Caldwell.
Doug Caldwell's book My Life in the Key of Jazz.