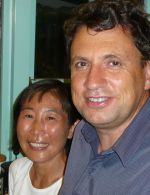 People were upset by the use of obscenities, plus comments that were perceived to be racist towards white people.

Talkback radio hosts, Internet bloggers and a raft of commentators all weighed-in to debate the significance of Mr Harawira's comments.

But why did it provoke so much controversy?

Is it because many New Zealanders believe that racist attitudes are no longer tolerable?

And if so how accurate is that picture?

Our Pacific Issues Correspondent Richard Pamatatau has been finding out.

A warning that at the beginning of the programme some of the emails with language that could offend some listeners are read out.

Photo: Dr Thomas Robinson with his wife Dr Tsui Wen Chen, who is sometimes mistaken for a mail-order bride.