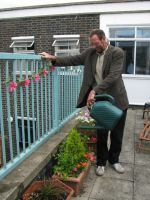 Plans for the country's first shelter where homeless alcoholics can drink openly have been shelved amid community pressure on its funders.

The wet house concept is well established in other countries and ensures those with chronic alcohol dependence aren't left out in the cold.

But residents near the proposed hostel site, in the beach-side suburb of Island Bay in Wellington, expressed fears about the impact of having a house in their communtiy that could be full of drunk men.

And for now, at least, they seem to have won

Radio New Zealand's Social Issues reporter, Teresa Cowie looks at the background of the proposal and asks what is likely to happen next.

Picture: A resident tends the garden at an established wethostel in London