Every year up to twenty people die completely alone in Amsterdam. There are no friends or family to prepare their funeral or mourn over the body. 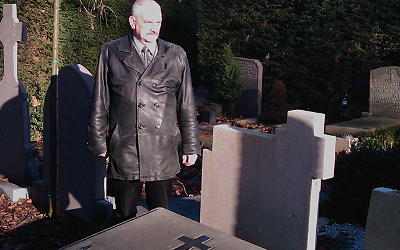 Some die alone in their home, with nothing but their identity. The anonymous dead are illegal migrants, drug mules, or simply people who for one reason or another, cut off all social contacts. Some are elderly, some are infants.

For more than 20 years, retired Amsterdam civil servant Ger Frits has made sure that these lonely or unknown citizens get a respectful send-off. He visits their homes if they had one, and carefully chooses music to play at their funeral. He puts flowers on the coffin and accompanies each person to their final resting place.

“Farewell sir,
without papers, without identity. What were you looking for?
How much did you lose along the way?”

A few years ago, Amsterdam poet Frank Starik decided that these people also deserved to be eulogized. He contacted the Amsterdam city services and asked if he could take part in these forgotten funerals. Despite concerns over privacy, Ger Frits agreed.

Starik says that the poem is first and foremost for the deceased. He’s not a religious man, nor is Ger Frits. But he feels that the funeral is a moment of reckoning. “It’s your time at heaven’s gate, he says. “Someone needs to put in a good word for you.”

“Who then, loved you? In which rooms did you sleep,
who kissed you goodnight, who’ll wear out your shirt?
Who will want to stand where you once stood?
Who now takes the road you took?”

“People are story machines,” explains Starik. “We’re always busy making and re-making our stories. What the Lonely Funeral does is return stories to people who have somehow lost theirs along the way.”

Starting with their very first funeral together, Ger Frits and Frank Starik forged an unlikely friendship based on mutual respect for the lonely citizens of their city.

“Who still looks for you? Who remembers whence you came?
Who heard the voice calling out for you to come on home, man,
to your final haven, Amsterdam.”

City workers visit the houses of the deceased to sort out their bills and administration. They also see the loneliness. The visits have a practical purpose, but they also provide inspiration for the poems read out at the service. "The funeral is a moment of reckoning and someone needs to put in a good word for you. One of our essential qualities is a need for a story…. What the lonely funeral does is return stories to people who somehow have lost theirs along the way," says Starik.

The Lonely Funeral was produced and presented by Michele Ernsting for Radio Netherlands Worldwide and was part of the international exchange series Global Perspective – At the Edge.