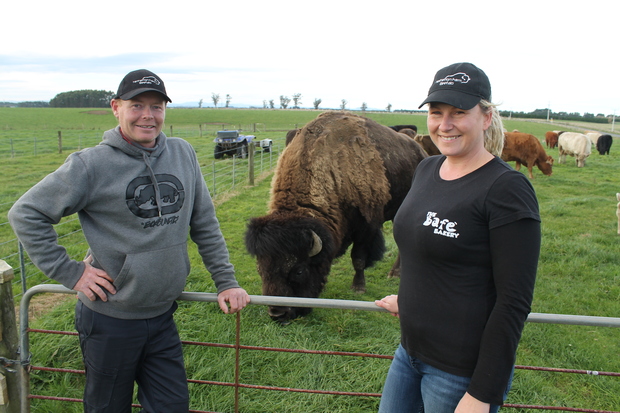 A herd of American bison cross cattle that produces excellent meat is roaming the paddocks of a Southland farm.

It all started when Otautau farmers Nadia and Blair Wisely bought a bison called Bobo.

Bobo was supposed to be farm pet, but when the huge beast turned up four years ago it got them thinking. They did some research and came across a bison and cattle hybrid meat producing breed called Beefalo, that was developed in the United States during the early 1970's.

Since then the couple have been building up their own Beefalo herd by artificially inseminating Murray Grey cows with bison semen from America.

Blair says "We're getting to the stage now were our cow herd has got about 25 percent bison in them".

If they can get a bull like Bobo to breed naturally with the herd they will no longer need to import the expensive semen.

They started selling small quantities of the meat to local outlets in 2014 under the Netherton Farm Beefalo brand but it's now so popular demand is starting to out-strip supply.

"If you like beef you'll love Beefalo, it's slightly richer and slightly sweeter, but very beefy flavoured" says Nadia.

Bison have an interesting history in New Zealand. President Theodore Roosevelt sent half a dozen of them to our shores at the turn of last century in an effort to save the endangered species and it appears to have worked. Bobo is a descendant of those animals.