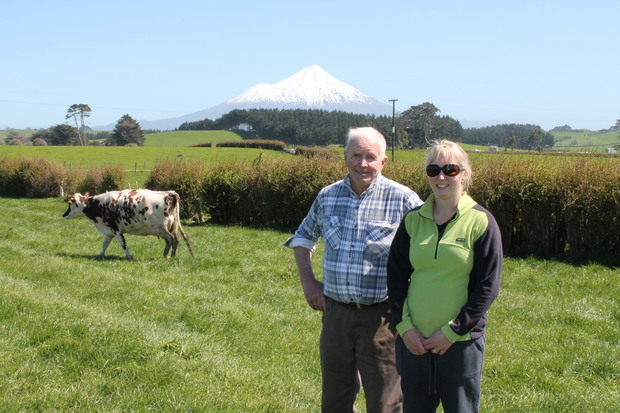 There's a lot of talk about cows around the Fredrickson's dining table at their Ngaere farm.

"It's the subject debated most of the time; which are the best ones, which ones are going to go to the show and which ones you put in the works,' Ivan Fredrickson says.

His daughter Kylee Perrett agrees. "Mum gets very fed up," she says with a laugh.

Kylee and her husband Danny Perrett are sharemilkers on her parents' Taranaki farm and milk a herd of 260 pedigree ayrshire cows they bought from them.

Kylee and her father are also cattle judges. Ivan's been judging for 50 years and Kylee became a senior judge last year.

Kylee and Ivan estimate Ayrshires, which are typically red and white in colouring, make up just 1 percent of the national dairy herd and say they're under-rated.

"Unfortunately they've got a name for being bad tempered but that was bred out of them years ago," Ivan says.

They rate well for adaptability to milking, overall farmer opinion, shed temperament and milking sped. He says ayrshires are hardy, appear to be more resistant to mastitis than other breeds and they're also good milk producers.

"They're the 'in between' cow - in between friesians and jerseys for milk and size. "

Each cow on the Fredrickson's farm has a name; all 260 milking cows, the yearlings and all the calves.

It's Kylee's job to come up with new names which can be a challenge, as is remembering them.

"I don't know them all off by heart....probably about half of them, " she says.