Thine be the Glory

At the Lamb's high feast we sing

This Festal Choral Eucharist for Easter comes from the Auckland Cathedral of the Holy Trinity. The Dean of the Cathedral the Very Reverend Jo Kelly- Moore leads the service. The Bishop of Auckland, the Right Reverend Ross Bay, presides.

We begin with the choir singing the traditional carol 'This Joyful Eastertide'. 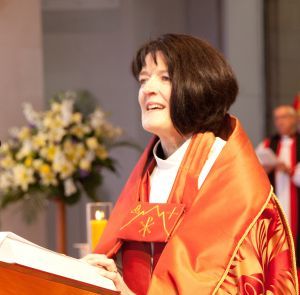 Dean Jo opens her sermon by asking “Are you one of those people who can’t help yourself from skipping to the end of a book, especially a thriller, when it is reaching the tension point, just to find out what will happen? Do you have that overwhelming urge to find out the conclusion so that you can cope with the journey of getting there?”

She goes on to explore what is not found in the Easter Day reading from St Mark’s Gospel – the kind of story-telling detail which provides an emotionally satisfying conclusion to the discovery that the tomb of Christ was empty. Instead, she says, “Mark records that seemingly, as a result, nobody did anything! That is not the Gospel ending that we might hope for. We don’t just like to know who the winner was, we like the sequels with what happened next. How did all this impact their lives? After all, the other three Gospel writers give us much more.”

During the rest of the sermon, which you can read in full below, she considers the implications of this apparent failure in narrative technique on Christian belief and action.

Today’s service features the Holy Trinity Choir performing a communion setting by the UK composer David Briggs of his Truro Eucharist. Other music conducted by the Cathedral’s Director of Music Timothy Noon and played by organist Philip Smith includes some well-known hymns and traditional works ranging from a French arrangement of Gregorian chant, to a communion motet by William Byrd.

This Radio New Zealand recording was produced by Justin Gregory, and engineered by Alex Baron.
All photos © Auckland Cathedral of the Holy Trinity.

Is it bad ending after all?

A sermon by the Very Reverend Jo Kelly-Moore

Are you one of those people who can’t help yourself from skipping to the end of a book, especially a thriller, when it is reaching the tension point, just to find out what will happen? Do you have that overwhelming urge to find out the conclusion so that you can cope with the journey of getting there?!

Well, if you applied that same temptation upon reading St Mark’s Gospel with the tension building as the Gospel writer records the authorities closing in to kill Jesus, if you skipped to the end you could run the risk of feeling truly surprised at the conclusion. What kind of ending is this? Now of course we find the testimony that indeed the tomb was empty – and the proclamation that Jesus is risen – but Mark records that seemingly, as a result, nobody did anything!

That is not the Gospel ending that we might hope for. We don’t just like to know who the winner was, we like the sequels with what happened next. How did all this impact their lives? After all, the other three Gospel writers give us much more of the ‘what happened next!

In contrast, in today’s Easter reading, we hear from St Mark that awe and amazement, and probably a little fear, arrested these first witnesses in their tracks after they had witnessed the empty tomb.

Where then does Mark leave us as today we celebrate the truth of the risen Christ?

Well, first I think that this resurrection account encourages us to read and engage the Scriptures beyond our presumptions and hopes. We are challenged to seek to understand why it is then that different gospel writers, with different audiences, contexts and emphases, take different approaches in their recording of this, and numerous other, encounters with Jesus and his teaching. And in that engagement to remember that, for our understanding of our Christian faith, and the truth of the empty tomb, this phenomenon does not leave all the evidence seemingly rendered inadmissible, but rather serves to enrich our understanding of Christ and the situation of these early Christians.

Secondly then, what we know is that at the heart of it all four Gospel writers proclaim - Christ is risen! Together they are unified in their witness that the tomb is empty and that this was witnessed first by the women who had stayed faithfully with Christ at the cross and had come to tend him at his death. This empty tomb, the risen Christ, being God’s yes to the way of life and hope offered by Jesus in his living, a way of justice and peace, hope and love for all the world.

And last, but certainly not least, while it would seem this Gospel doesn’t end quite the way we might have expected or hoped perhaps, in fact, in that ending we are given the greatest gift.

For we find a silence into which we can, indeed are compelled to, place ourselves and to ask ‘What will I do after receiving this proclamation that the tomb is empty?’, ‘What is my response to the risen Christ?’

As Jesus asked his followers ‘Who do you say that I am?’, so the risen Christ asks us the same question. Who do you say that he is? And as Jesus told his disciples to live and proclaim the kingdom of God until he comes again, so the risen Christ gives us the same command. What is our response? In the ‘so what?’ of the seemingly absent ‘what happened next’ in Mark’s Gospel, we are reminded that this is our truth, our story, our commission – here and now.

We know that on this sacred day Christians will be gathered around the world to proclaim that Christ is risen because while the women’s initial response might have been to arrest them in their tracks, we know that their shock did not leave them there. We know that in fact, quite soon after, they did tell the story of the greatest hope that the world could ever hear, the story of life, and as a result we are here. Today reminds us then this ‘telling’ is now our task too.

It is about lives informed by resurrection life and hope, and therefore lived looking to the needs of others, especially those most in need.

As a nation then may we be generous to the people in Vanuatu as this Easter they continue to face the enormous challenge of rebuilding in the midst of their grief. May resurrection hope be theirs.

As communities around Aotearoa New Zealand, may resurrection life call us to care for our neighbours, those we know, those we have yet to meet, those in most need – reaching out practically and in peace and friendship, seeking understanding. And may we be generous so that those in our communities who care for the most marginalized have all the resources that they need.

And as individuals, may the truth of the risen Christ challenge us to examine how we live, what we do with what we have and how we live with those with whom we share our lives – that through us also might come justice and peace, hope and love.

Ultimately this Easter St Mark’s Gospel brings us to the heart of the matter. As it began Chapter 1:1 ‘The beginning of the good news of Jesus Christ, the Son of God’; so it ends ‘Do not be alarmed; you are looking for Jesus of Nazareth, who was crucified. He has been raised.’

So was the response of those first witnesses a bad ending after all? I think we would have to say an emphatic No. Rather, it is an exciting one, an unexpected one, a challenging one, one that invites us into the story, and aren’t they, after all, usually the best endings?