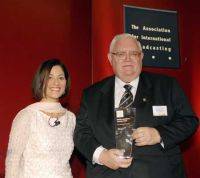 The AIB represents more than 25,000 public and commercial radio and television professionals worldwide and the annual awards recognise the very best in international broadcasting.

Highly commended runners-up for overall station of the year were the BBC World Service and the Middle East Broadcasting Networks-Radio Sawa.

In announcing the award the judges noted that the result was clear cut:

“Radio New Zealand International, targeting the Pacific, has proved it has the ability, clarity of vision and resources to deliver something that is valued by audiences throughout the region.”

The network has had a chequered history but, sixty years on, is stronger than ever, broadcasting today as Radio New Zealand International, an award winning, internationally recognised service, providing an essential link between New Zealand and its Pacific neighbours.