A Tahitian local says the new world record set in French Polynesia with 2,980 people joining for a traditional dance, shows Tahitians are taking back their heritage. 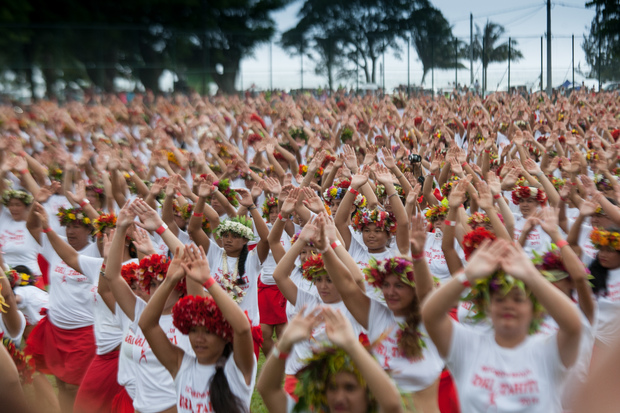 One of Tahiti's former MP's says the new world record set in French Polynesia with 2,980 people joining for a traditional dance, shows Tahitians are taking back their heritage. The organisers want to have the performance, which happened over the weekend, registered in the Guinness Book of Records to eclipse a dancing event in Mexico last year.

To comply with Guinness rules, the dance had to be performed at a set time, reportedly excluding hundreds of willing participants who were stuck in traffic trying to reach the site. Last year, Tahiti made it into the Guinness Book of Records for having the largest band of ukulele players in the world with 4,750 members.

INDIRA MOALA: It sounds very similar to the Ukulele event last year, where they all gathered to break the Guinness World Record then for the largest Ukulele band in the World

SB: Yes and they were very disciplined and very respectful and they wanted to show that the Tahitian dance is beautiful and when they danced, every hand moved at the same time. It was like they all danced as one person, one people. And they were all clean, beautiful people standing there. It was just amazing.

IM: So the dance, was it a traditional type of dance? was it the Ori Tahiti?

SB: Yes. It was a traditional (dance) and it was well prepared and every dance group got together and everyone that had danced in their life came. This was defending the honour. And they united.

IM: So had every group or little community - had they all practised together on their own and then they came together on the day to perform together?

SB: Yes, that's what they had done. They had been practising every night in different districts all over Tahiti were following it. And they were like no way, nobody's going to take our heritage away.

SB: Well we already know that Tahitians have the world record in matters of Canoes, probably surfing some day hopefully. Slowly by slowly, Tahitians are getting back their heritage.