Bobbing in the golden sunset on the calm waters of Avarua Harbour, sheltered by the lush, jagged peaks of Rarotonga, the vaka is an impressive sight.

Its double hulls are held together by solid wooden beams, on top of which sits a half-cylinder wheelhouse nestled between two masts. Its fresh varnish glistens in the setting sun, its final throes buttering the tropical horizon a soft orange.

The vaka, Marumaru Atua, sits ready, waiting for the great and important voyage ahead.

This voyage, which started this week, sees a crew of mostly young Cook Islanders sailing to all of the country's 15 islands and atolls, spread out across 2 million square kilometres of ocean.

Starting from Rarotonga and heading north to Aitutaki, carrying on up to Tongareva, before turning around and down to Mangaia, stopping at each and every island between.

But they are trying to reach their destinations the traditional way: using only the stars, the wind and reading the ocean's currents.

It's a journey they hope will inspire a renaissance of the knowledge that saw their tipuna navigate across the great blue moana, a knowledge that, today, has dwindled to the point of being endangered.

"To do a trip like this, to go to all of [the islands] one-by-one, as part of one big trip. It's incredible, it's very historic, it's awesome," said Alex Teariki-Olah, of the Cook Islands Voyaging Society.

"It's about teaching and maintaining the way that we sail these canoes in a traditional manner using traditional techniques and passing it on to the youth that we're taking with us." 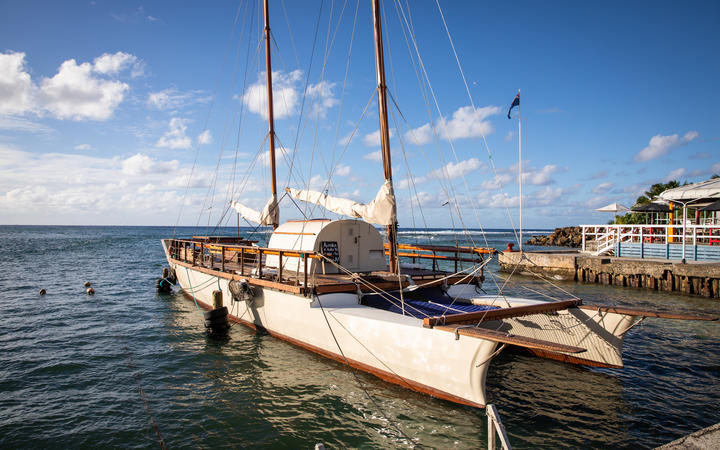 The Marumaru Atua itself is a replica, one of about a dozen across the Pacific built using blueprints taken by an assistant to the British sailor, James Cook, in the 1700s which were found in the British library.

"The lines, measurements, everything are absolutely correct, down to the last detail," Teariki-Olah said.

"That is except for the modern materials," like the lightweight fibreglass hull, or the more durable sails. "Our excuse for that is if our ancestors had these materials they would be using them."

But that does not make it any less impressive. The evening RNZ visited, several crew were doing some final preparations on board, the vaka tied at the wharf outside the famous (or notorious, depending who you ask) Trader Jacks. From there, locals marvelled at the vaka as they went about their evening.

Ungraciously ascend the wobbly gangplank onto the Marumaru Atua and you're instantly struck by the mana of the vessel, known affectionately by the crew as their mama. "Look after your mama and it will look after you," they would say as they carefully folded ropes, or swept its deck an umpteenth time.

Dion Wong is one of the crew. He's been hooked on sailing for years, he said, and would gleefully show the vaka off to anyone and everyone who asked.

He demonstrated the tiny galley and the rudimentary shower system: a bucket tied to a rope at the back of the boat ("no point being shy on here," he said, when the lack of privacy was raised).

He crawled below the deck, into the tight and claustrophobic sleeping quarters; eight bunks, barely more than five feet long, in each hull.

But Wong takes the most pride in explaining how the vaka gets around.

"We're guided by the swells, the sun rising and setting, and then once the sun goes down then, oh I mean you've got the sky, you're using all the stars."

He proudly raised the 'oi at the back, a giant wooden rudder that's hand controlled 24/7. In shifts a person steers, keeping a straight path. Beneath the 'oi, carved beautifully onto the deck, is the compass that maps the stars, which keeps them to their path.

"Our stars, the sun and the moon, you know, they rise in different houses," he said, pointing his toe at various names on the compass - Kainga, Ra, Oronga, Ngoio - with the vaka at the circle's centre.

"So if we're rising, say, straight on East. You know that that's gonna come on up and it's gonna set in the opposite house, and we're in the middle here."

The helmsmen at the 'oi will follow that path, steering a course to a tiny atoll in the vast expense of the empty blue Pacific.

But what about when it's cloudy? Wong said there's always a gap in the clouds to offer a peek at a star or the moon. During the day, there's always something to train the eye on.

"An atoll, it's got the big lagoon eh," said Wong in a tone that would suggest the knowledge was obvious.

"So you can see the reflection of the lagoon water on the bottom of the cloud. Look along the horizon. All the clouds are grey. [But] on the bottom you'll see a blueish, greenish hue."

Alex Teariki-Olah said it was this knowledge that had tipuna from across the Cook Islands, the wider Pacific and Aotearoa navigating from island-to-island as the great voyagers. But now there are few who can read nature in such a way. It's a science that has become endangered, he said.

That is why there are a dozen young Cook Islanders on this voyage, all there to learn from the two master navigators who will be guiding them. At each island, they will disembark to meet with communities, to feast (kaikai), and to teach others about navigation, hoping to inspire more to join future voyages. 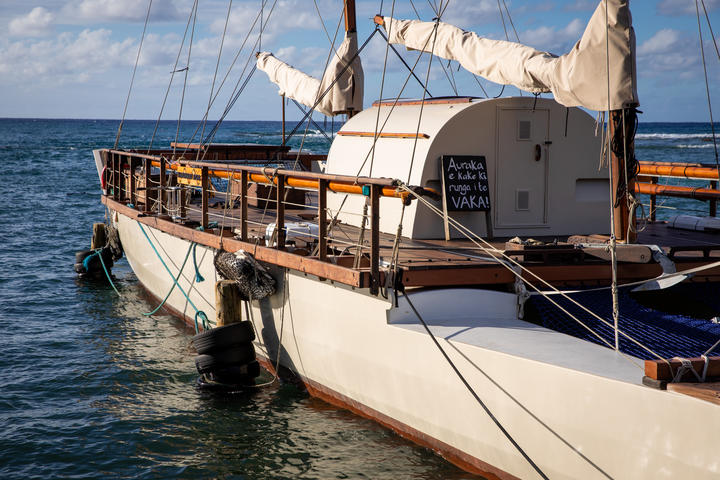 They are trying to reach their destinations the traditional way: using only the stars, the wind and reading the ocean's currents. Photo: RNZ / Nate McKinnon

Tiana Haxton is one of the young Kuki Airani who will be joining for a section of the journey.

"This is an incredible part of our history, of our culture, that was lost," she said.

"We only have two master navigators in our entire country and - forgive me for saying - they will be getting on a bit soon. Our youth really need to get on board and make sure we don't lose it again."

The crew of the Cook Islands Voyaging Society have been preparing for the journey for weeks. They were initially meant to leave a month ago, but had to wait for Covid-19 vaccinations.

In the meantime, they have been sanding the decks, adding coat after coat of varnish. There's kai to prepare, coffee to stock up on. ("The boys might look a bit rugged but they don't mind a bit of a latte," said Dion Wong.)

Haxton has been stocking up on motion sickness medicine, while they have all been doing practice laps around Rarotonga.

But this week, they finally departed, out into the great Pacific. The journey is expected to take about four months, but Alex Teariki-Olah said there's a saying: "the vaka arrives when she wants to".