The Japanese city of Yamagata will host Samoan delegations in the lead-up to the Tokyo 2020 Olympic Games after signing a Memorandum of Understanding with the Samoan government.

The agreement was inked by Samoa's Ambassador to Japan, Her Excellency Faalavaau Perina Jacqueline Sila-Tualaulelei and the Mayor of Yamagata Takahiro Sato. 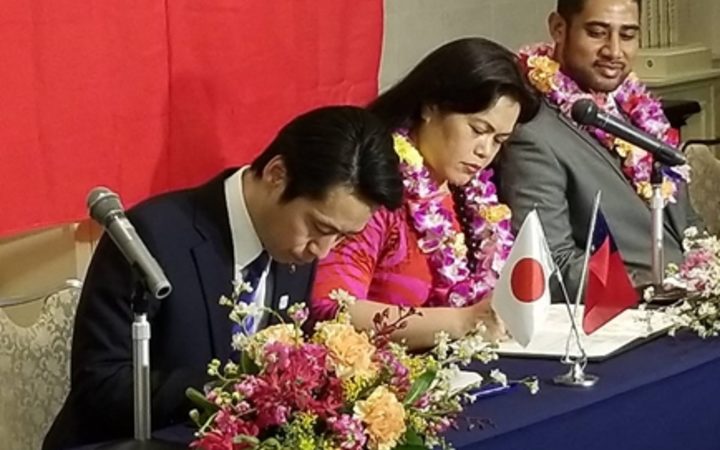 The agreement was inked by the Mayor of Yamagata, Takahiro Sato, and Samoa's Ambassador to Japan, Her Excellency Faalavaau Perina Jacqueline Sila-Tualaulelei. Photo: Supplied

Yamagata City will be the 'Host Town' for Samoa and the Samoa Olympic delegations during their pre-camp training period before the Tokyo Games.

The MOU also marks the formal commencement of cultural and sports exchanges between Samoa and Yamagata.

Under the terms of the MOU, Yamagata City will provide all domestic arrangements, accommodation, transport and training facilities for Team Samoa during their visit.

The MOU will also help pave the way for school visits, college rugby team exchanges, visits by cultural performers and more, between Samoa and Yamagata City.

As part of the MOU, Iwaki City will provide sponsorship for the Manu Samoa rugby team during the 2019 Rugby World Cup in Japan, including all domestic arrangements, accommodation, transport and use of the necessary training facilities.

The second phase of the MOU will be signed in Apia next week with the Executive of Samoa Association of Sports and National Olympic Committee.