There are hopes that a major national broadband transmission network planned for Papua New Guinea will allow for competition.

The Chinese telecommunications company Huawei has announced it will help PNG build a 5,457 kilometre submarine cable network to connect across 14 main cities and towns.

Huawei says it expects that when completed, the network will cover 55 percent of the population and provide more than 70 percent of PNG's domestic bandwidth requirements. 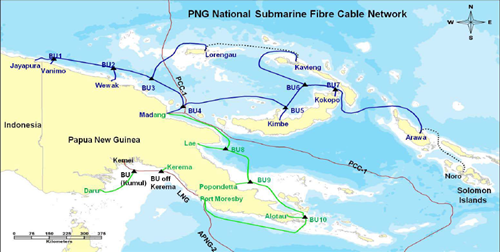 Paul Barker of PNG's Institute of National Affairs said there are claims that the network will result in significant reductions in service costs.

"PNG needs to sort of look carefully and also to make sure that competition remains in play, because we do know that over the years the main, incumbent service provider has used or to some extent misused its gateway control to restrict competition," he said.

"Okay, you had competition at the retail end but the access to the fibre optic cable went through a single service provider. Its service hadn't been expanding, it was of limited capacity and they were milking it."

Mr Barker said PNG should also be cautious of the level of expenditure and borrowing that is entailed in entering this arrangement with Huawei.