The roughly 900 men are to be held in separate compounds according to the determinations on refugee status for each individual case.

Immigration officials today told refugees and asylum seekers that those with negative refugee status will be moved to the compound named Mike.

To date, Mike Compound has been the site of a wide range of claims by the men housed there of inhumane treatment and poor, isolated conditions.

In April, PNG's supreme Court ruling that it was illegal to hold the men against their will at the Manus offshore processing centre, and that the centre should be closed. 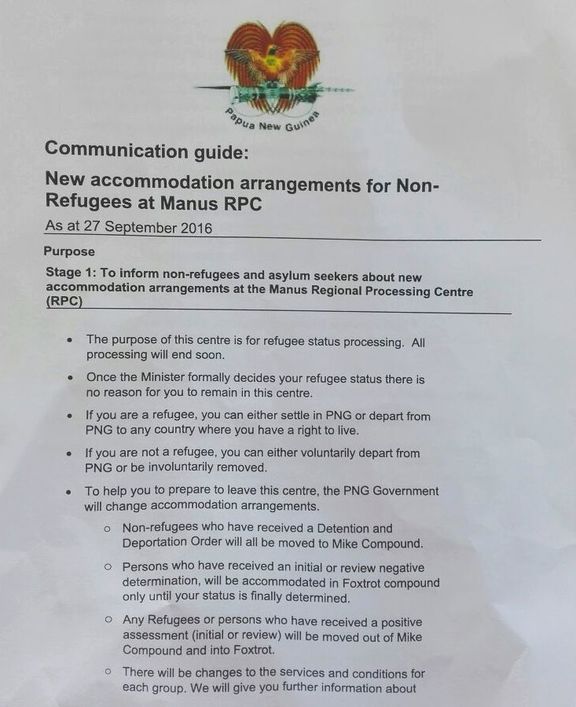 The notice about new accommodation for men on the illegal detention centre on Manus Island. Photo: RNZ

PNG and Australia's governments say they are working together to close the centre, but it remains unclear where the men - the majority of whom have so far been found to be refugees - will be resettled.

In a notice to the men, Immigration has said refugee status processing will end soon and that once their status is determined, there is no reason for individuals to remain at the centre.

Those deemed to be refugees can either settle in PNG or depart to any other country where they have a right to live.

If they are not found to be a refugee, the men have been told they can either voluntarily depart or be involuntarily removed.

In the meantime, Immigration said it is changing the accomodation arrangements,

Non-refugees who receive a detention and deportation order will be housed in Mike Compund.

Persons with an initial negative determination, pending a review, will be moved to Foxtrot Compund until final determination.

Those with positive refugee status will be moved out of Mike, away from the negatives, and put into Foxtrot.