The Oceania Football Confederation have signed a Memorandum of Understanding with Asia to work together in developing football in both regions.

David Chung said the partnership allows the two Confederations to exchange information, experience, knowledge and best-practice across these matters.

"This is an excellent opportunity to draw on the knowledge and experience across the 47 AFC Member Associations, while we can share the expertise we possess in Oceania," Chung said.

"This is the beginning of a symbiotic relationship which will benefit all of our Member Associations and I would like to thank my counterpart and the AFC Executive Committee for your commitment to the betterment of football.

"We are incredibly excited to be collaborating with one of our closest neighbouring Confederations and we are looking forward to the advantages the strengthening of our relationship will bring," he said. 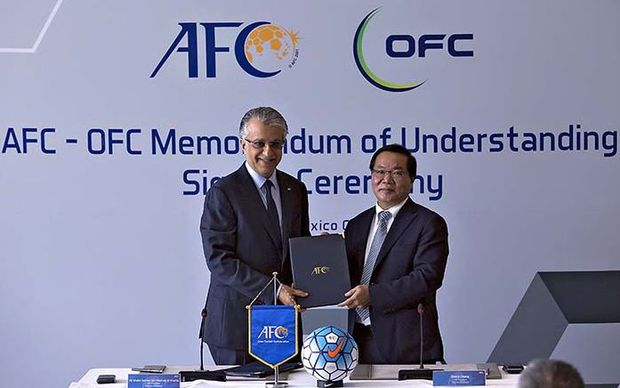 A key objective is to raise the standard of football in both Confederations and Chung said development will be at the forefront of achieving this.

Shaikh Salman says AFC is has always held a strong belief that unity between Confederations is important.

"At AFC we have always believed that all Confederations must work together - both big and small - to reunite the game under the FIFA flag. Only then can we restore confidence and trust of the people in football - and particularly those who run football."

David Chung said their vision is to work together with AFC to create solid development plans and strategies to strengthen both Confederations in the global game.