The Samoa sevens coach Damian McGrath say he was given a "slap on the wrist" by the powers that be for publicly criticising the team's travel schedule.

Following last month's Wellington tournament, the Manu squad had to be ready at 3am to catch their flight to Sydney - barely seven hours after playing their final match at Westpac Stadium.

Upon arrival in Australia, the players weren't able to check into their hotel in Sydney until 2pm local time, and many lied on the lobby floor for five or six hours until they could enter their rooms. 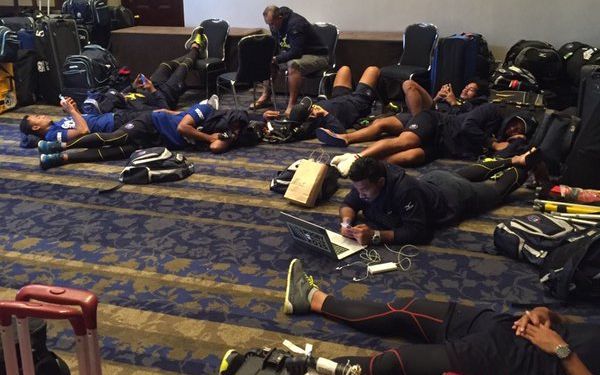 The Samoa sevens team tries to get comfortable in their hotel lobby. Photo: Twitter / @mcgrath_damian

Damian McGrath said both World Rugby and the Samoa Rugby Union were unhappy that he chose to share his frustrations on social media.

"The situation just escalated into a real farce and we had the conversations with the powers that be and they said I shouldn't have spoken publicly about it. I just felt that I had to say something because, it really was terrible how we were treated. To be fair, we got the apology I think we deserved because player welfare is the ultimate thing and it's the players who put the spectacle on, and it's the players who get two full houses at the Sydney Football Stadium to watch and if the players aren't at their absolute peak the spectacle's not as good. By a long way we weren't the only team that were unhappy with the way things went on Monday - it was just I spoke out, rightly or wrongly."

Damian McGrath said their travel schedule for the next tournament in Las Vegas isn't good enough either but they're hopeful it can be adjusted after receiving assurances it won't be repeated.