Samoa are keeping a positive mindset despite a rough start to the Oceania Under 17 Women's Football Championship in Rarotonga.

The Samoans, who are making their tournament debut, were thrashed 11-0 by New Zealand in their opening match.

One player is out of the tournament after fracturing her knee during the game while two players who also left the field with muscle soreness have recovered in time to line up against Tonga this evening.

Coach Nadia Malifa says despite a heavy loss first up, it was a valuable experience and a win today would keep them in the mix for the semi finals.

"We have a few girls that did play internationally but most of the girls it's their first time playing a tough team like New Zealand. We witnessed that they have learned a lot from the game and these are the motivations for them to play against Tonga."

The other Pool A match today is between defending champs New Zealand and New Caledonia, who outclassed Tonga 5-0 in their first match. 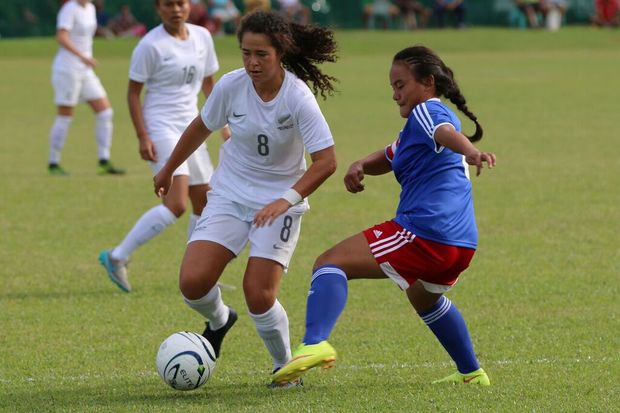 The New Zealand U-17 women's team kicked off the tournament with an easy 11 nil win over Samoa. Photo: OFC