The Pacific Games Council says it is concered by the lack of progress in Vanuatu towards the 2017 Mini Games.

Demolition work was due to begin in March on the main stadium in Port Vila, but was delayed following Cyclone Pam.

Nine months on the Korman site remains dormant, with local organisers waiting on the government and Chinese contractors.

The Pacific Games Council met with government and opposition MPs in the capital last week and the Council's Executive Director, Andrew Minogue, says the issues were raised with the Prime Minister.

"Clearly the Chinese Government have made the commitment to redevelop Korman, which is the main stadium site in Port Vila, and if they go ahead and do that as planned then we're going to have most of the Games venues provided at that site. Obviously the cyclone set things back a little bit - right now the Chinese government are completing the convention centre in the middle of town and once that's finished we understand they will turn their attentions to the Korman site and the sports venues that we need for the Mini Games".

Andrew Minogue says the political instability in Vanuatu hasn't helped either, but both sides have indicated their commitment to hosting the Games. 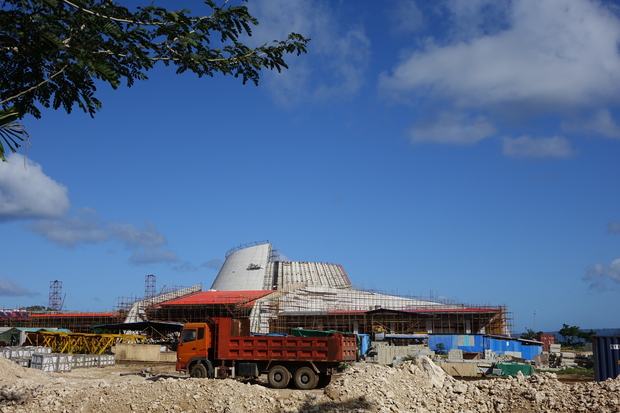 Chinese contractors are expected to begin work on venues for the Pacific Mini Games in Port Vila, once the construction of a new convention centre is complete. Photo: RNZ / Veronika Meduna